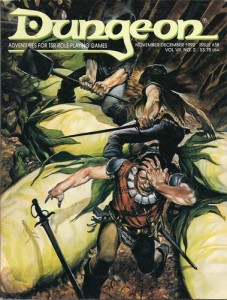 Note my new feature, in which I try to find something worth stealing for your own game in every adventure!

Monsters are attacking a village and people are starving. You’re called in to help. Wizards in a ruined keep have planted monster summoning disks throughout the land. Kill the wizards in their manor home, go fight the monsters and destroy the disks. The scenery in this one isn’t so bad. The land is just out of monarchy and, facing desperation caused by hunger, is about to elect a new official. There are a lot of throw-off descriptions of electioneering which can provide a great backdrop to the adventure if sprinkled liberally throughout. Frankly, the adventure could have used a lot more of this. The rumors are not bad but the 32 room “Wizard Manor/Hideout” could have used A LOT more beefing up. There’s a lot of useless descriptions of things not important to the adventure and then little to make it memorable. In particular, how the manor reacts to intrusion is missing. This sort of thing should ALWAYS be present with intelligent opponents. Inside the manor you find a map to the monster summoning devices, and by using it you dig them all up, defeating monsters along the way. When you get back to town you discover that he guy behind it all was just elected to be in charge. You confront him and he leaps over the table to single handedly fight each and every one of you … and the village mob? That doesn’t seem right for someone who’s described as a cunning schemer. This sort of adventure is fairly typical for Dungeon. One good idea that is surrounded by mountains of text and irrelevant detail, with no interesting treasure or imaginative magic items or encounters. The electioneering thing is well worth stealing though.

Kipper the Dog, the Adventure! This is an absurd number of pages, 22?, for a non-adventure. Elves in forest hear scary noises coming from a taboo place. Go there to find some friendly firbolg, tearing the taboo place down. They’ll stop if you kick out the witch Lady Ugly. She’s actually a friendly drow who’s made friends with a lot of the forest creatures, including The Black Unicorn. But the truants and galen dur don’t know that. It contains one of my all-time favorite examples of how to not write a room description:

5a. Old Animal Pen
This area, defined by the eight stake holes shown on the map, was used as a holding are for horses and animals that would ventrally end up in the goblins’ stewpot. The wooden pen has long since rotted away. Adventurers finding the holes can only guess at their original purpose.

Fucking seriously? Not just what is used to be, but how it was used before you tell us it’s all irrelevant? The entire adventure is like this. There are THREE pages of backstory and history that will NEVER come up in play. It’s CrAzY! MOUNTAINS and PAGES of text about the elves, which serve only as a hook. On the plus side a couple of the magic items are slightly above the usual dreck. A ring which acts like a broach of shielding and a scepter that acts like a staff of withering. Yes, that’s what passes for “above average” in magic item descriptions from Dungeon.

This is a very short adventure, meant to frustrate the players. Do your players like to be frustrated on purpose? Mine don’t. A little girls steals a magic item from a PC and runs away in to a six room tower. Inside there are a bunch of doors that act like a phase door, a couple of cursed items in one room, and a few things like that. It’s supposed to play out like Home Alone., except there’s not nearly enough in the tower to support that style. You’re supposed to capture her and free her from a curse. I’d just kill her, but, hey, that’s me.

Invasion of the Body Snatchers, Ravenloft style. You’re hired to retrieve a meteorite and end up in a village with friendly people (pod people) and paranoid villagers … some with a secret or two in their closets. This adventure is trying to do the right thing but, perhaps, struggling through the format popular at the time. It recognizes the importance of the NPC’s in the village and how the adventure will revolve around them, giving a little stat summary sheet to refer to. The text of the adventure also lists how those villagers feel about other villagers and how they interact with them and what they have to stay about them. That is GREAT. A good social adventure thrives on the interpersonal relationships among the NPC’s in order to come alive. This tries real hard to do that, although it’s still going to take a lot of reading, highlighting, and note taking to run it that way. The adventure relies on one key thing: getting the mayor to tell you where he buried the meteorite. And he’s bats hit crazy insane AND has magic items to keep you from taking a shortcut. This is a rough one for me to recommend. It has good advice on running the pod people, and good advice on running the villagers, and good rumors integrated in. It’s just going to take a solid session of photo-copying the thing and transcribing notes in order to get it in to a position to play it easily. That’s a lot of prep work … I think you could get a really nice adventure out of it though. The NPC’s are strong in this one. If I were to every find the time to rewrite some Dungeon adventures to improve them with modern day formatting, this is one of the ones I would select.

It did strike me though that, in the context of 5e, the standard spell list should be closer to a ravenloft style one, with more ambiguity in good/evil detection, lies, and other magic that skips parts of the adventure, like commune, teleport, passwall, stone to mud, and so on. These things are troublesome for a style that emphasizes plot. The standard spell list would be great for a more OSR style 5E game that relied on the meta aspect of those spells to solve dungeoneering problems. And it would shut me up about bitching about “the tombs walls are immune to passwall.”

Bryce’s Standard Hook Advice: Every time you read “adventurer”, replace it with “mercenary” or “mercenary scum”, as your campaign dictates. Things make a lot more sense that way and give you a radically different vibe.