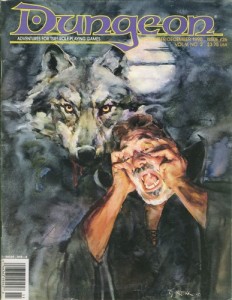 The Letters section of Dungeon magazine may be the most amusing thing an RPG enthusiast can read in 2014. “You suck! I will never buy your magazine again because you published a MSH adventure!” Response: “Ok. Enjoy the Tope Secret adventure in this issue.” It’s also nice to see that the rules lawyer and pedantic reader have always been present in the hobby.

The advancement in adventure design is also noticeable. You can run almost any level of The Darkness Beneath, from Fight On! Magazine, with just a brief read-through. Dungeon Magazine adventures, of this era anyway, seem to require an in-depth reading, a photocopy, and strong highlighter/margin notes work to get in to a runnable fashion. I complain a lot about newer stuff but almost all of it is more coherent than the older stuff.

This is an assault on a small keep of 23 or so rooms, taken over by hobgoblins. It’s got a nice tactical/sandbox feel to it and could be a nice part of a new campaign kick off. Someone inherits a keep from their dead uncle on the condition that they kick out the humanoids that kicked HIM out. What follows is a brief description of a small keep, which is actually more of a fortified manor home in terms of size. The hobgoblins are given the rigid and organized military structure that describes them, with good guards and good responses to alarms/intruders. You get a decent feel of how they run the place and thus it turns in to a kind of infiltration mission … hence the sandbox label. Contributing to that are short descriptions of the tribe and the region the keep sits in, as well as how it related to Waterdeep. This is ALMOST enough information to have it act as a home base. A couple of more hooks and maybe a small description of a nearby village or tenants/neighbors would have turned it in to a full scale “home base” adventure supplement. The hobgoblins each get names and personalities, which is a bit unusual. If the party were to ally with them then it may come in to play, but the bulk to the adventure is laid out like a hack-fest, with maybe one of two of the hobgoblins willing to talk before attacking. The hobgoblin and regional background add a lot but its not clear it will come up at all unless this is springboard to larger adventure. It runs long, because of the verbosity of the descriptions, for what it is, but that seems to be the style of the time. It is one of the stronger adventures in the magazines run thus far. Batter monster/treasure descriptions and a STRONG edit to pare it down would turn it in to a pretty good thing to run. A much better infiltration adventure than any “you are all thieves. Break in and steal this thing” adventure that I’ve ever seen.

I’m not qualified to review Super Heroes but I most certainly am for modern spy adventures, having played in a Danger International campaign for something like eight years. Dominic Conrad, Sven Jormungdr, and Imp Shantier shall live forever in the annals of tradecraft!

This is a straightforward investigation adventure with some opportunities for gunplay if the characters get found out. Someone at a west german army base is passing on secrets and the party is tasked with find out who. There’s a great timeline involved, along with location descriptions that are very appropriate for the adventure. IE: short-ish. “It’s a normal house. In the bedroom in a false vanity drawer you find …”. The descriptions are, in fact, much longer than that but not quite so long as to be unmanageable .. At least as long as your highlighter is at the ready. The reality of the scenario is that the party has to be very much on their toes or they will fail the mission. This then is the major flaw. Three hours in to the timeline almost certainly decides the adventure outcome. Hints and clues are never a parties strong suit and I doubt VERY much if they will pick up enough after the “3 hour window” to get to an interesting outcome. It’s more than likely they are duped and the adventure ends up being a snorefest with no real gunplay, torture, or excitement. I was quite pleased with the level of detail provided but the short timeline will almost certainly cause a fail … meaning no fun.

A sucky adventure. How do you know to trust me on that? Someone is wearing an amulet of proof against detection and ESP. That ALWAYS means sucky adventure. The party joins a caravan, supports it in a couple of monster attacks, and then is attacked by the caravan when they transform in to monsters that night. Every possible trick in the GM book is made to screw with the party so “the big reveal” can be a surprise. They don’t lie. They don’t detect evil. They don’t detect as BLAH. They can control their transformations. They can blah blah blah. It’s a DM railroad of epic proportion. I would say it is completely not worth anyones times except for two things. First, the caravan attack encounters are of a nice length. They are short, just a fews sentences or so each (12 bugbears attack by blah blah blah) and the caravan keeps some meals ready, polymorphed in to birds and turtles, in cages. This could lead to some great little adventure hooks as the party turns the prisoners in to NPC’s.

This isn’t really an adventure but rather an encounter. Some spriggan has set up a trap in the forest in between two trees. There’s a lot of stupid and unnecessary backstory present that tells of how the spriggan and ettercap and spider came together to seethe trap. This kind of extreme history/reasoning never made sense to me. This thing suffers a great deal from the authors “I NEED it to make SENSE” syndrome. You need a pretext of believability, you don’t need to rationalize everything from what’s in the books. Just do something new … THAT’S WHAT THE PEOPLE WHO WROTE THE ITEMS IN THE BOOK DID. Two pages for s deadfall trap==All that is wrong in the world==1

This is a short little multi-day wilderness adventure that ends in a little puzzle room. The hook is problematic, which colors the entirety of what would otherwise be a decent little quest. The party finds a book in a clearing while setting up camp for the night. Touching it curses the party with certain death in 4 nights unless they go destroy the book. Fortunately, the way to destroy it is only 2-3 days away. That’s kind of a suck ass hook. Specifically, each day the party is attacked by a special monster. The first day 1, then 2, then 4, then 16, then 256, then an unlimited number. The punishment doesn’t fit the crime, so to speak. This feels like major transgression territory rather than roadside hook territory. Maybe a 4-fer, of 16-fer, over the long term of the campaign, but 256/continuous is a TPK. All for doing what the players should be doing … pushing buttons. “If’s the PC choose to ignore the warning and do not follow the quest then the DM is free to destroy them at his lea sure” This is the kind of DM behavior that a generation learned from. LAME. There are maybe three programmed encounters in the wilderness, two of which are moderately interesting while one is just “giant weasels attack.” The party runs across a tortured ranger and a patrol of soldiers form an expeditionary force. Both of those are going to have great role-play opportunities. There’s a local baron/king after the same location the party is going to and he’s the reason the ranger is tortured. I always like patrols of soldiers and the fact that this one leads them to the despot should end up being great fun. The Dukes’ camp at the location the party is traveling to could have used a more … tactical? Map to show the locations of the soldiers, tents, guards, and so on, since a sneak and/or running combat seems almost inevitable. The end of the adventure has a nice extra-dimensional space to explore that FEELS wondrous … or at least as wondrous as was possible in Dungeon in 1990. A magical valley, a shimmering doorway, and a mobius strip dungeon. Entering the room from one side of the strip allows you to create things and from the other side allows you to destroy things. Nice touch. The magical valley could use a bit more ‘magical’ description, but at least there’s a magic doorway int he middle of the air. There’s a handful of magic items present, like a ring of protection against stirges and a few other similarly unique items. Those were nice, even the ones that more closely resembled book items. The mundane treasure is just generic though. This is an adventure is a couple of good encounters, including the final one, but is lacking in the overall feel. The magical focus that is the subject of the quest needs an uplift, much of the wilderness journey is mundane and boring, and the hook, as given, sucks ass. This could be salvaged though by someone who cared. But is it worth your time to do so?

This is an investigation adventure in a town. The group is hired to find someone, who turns out to be a lycanthrope. And possessed by the local evil sorcerer though dead. He wants his magic soul jewel back and is running around killing folk to get it. There are three locations described. Each has some information to learn from someone, if the party gets there soon enough. If they don’t then there’s a body/crime scene to follow up on. Eventually the party learns about a caper at the Museum (ug!) and perhaps tracks the dead-but-not sorcerer back to his sewer lair (ug!) It’s hard to recommend this. I;m predisposed to like this kind of adventure because the best campaign I ever ran was all in on one city. I like the open-ended nature of city games. The three various locations are handled well enough, and there’s some thought paid to the thieves guild: what they can tell the players and how they react. For some reason I got a very ‘Sopranos’ vibe from the thieves guild in this adventure, which I can very much groove on. I’m to sure if it came from the adventure proper or popped in for another reason, but it brought a new appreciation of he adventure to me, or at least that one aspect of the adventure. The backstory is hard to buy in to, as is the hook. The city is not detailed and a city without flavor is atrocious to run. The clue sites are well done though, as is the thieves guild. WAY too much time is spent on the tactics of the various sewer dwellers, so much so that it feels more like a 4e section. Did I mention the clue sites? The Captain of the Guard who bought himself in? The lowlife wife of the guy missing who’s shacked up with some other lowlife? The wizard dude who doesn’t care about anything else? Those clue scenes, and the guild are VERY well done. Almost like the designer ripped them from Cops or some street reality show. That’s what makes this adventure work. Good enough to steal ideas from, if not good enough to run.