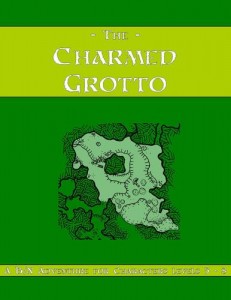 This is a small ten-ism room cave system under a hill near a village. It’s packed full of baddies, has more than a few interesting features, does treasure (mostly) right. It doesn’t quite have the weirdness or … puzzles? I would come to expect from an OD&D adventure. Because of this, I think, it feels like a much lower level adventure then it is. The high level is, primarily, because of one monster.

Dyson has created a little adventure around one of his maps. I’m so very frustrated with Dyson. Parts of what he does are very good, and I want to like them. But there’s never ENOUGH. A lot of his work ends up being very cramped or 2-houry. It’s like seeing only one small part of Water Lillies. There’s just a hint and taken out of context things are not as nice.

Near a small village is a grotto. In the grotto live some bad things. The party will go in to the grotto, kill the baddies and take their stuff. Dyson gets the party involved in three ways that all seem very natural and good. They could be attacked by bandits while camping/traveling, and track the bandits back to their lair. I like tracking things back to their lair and that fits in well with the moron bandits who live in the caves. Their’s also a hook involving the bandit leader. He escapes the caves and ends up in the inn in town, bloody and disheveled, talking about how something evil is in the caves, killing his men and making off with their loot … “thousands in plundered goods”, to quote Dyson. There’s a nice little moral setup that ends in gold and more morality. Hard to argue with that hook. The final is a kind of In Media Res. I imagine the villagers gathered around the hill that the grotto is on and the party coming up on them, kind of like wandering up on the scene of a little girl stuck in a well. Old Bill, the village “problem solver”, if you know what I mean, nought a rope this morning and went down in to the grotto. He’s not come back up.

Old Bill deserves a little more from me. Dyson does a good job of painting a picture of an NPC with Bill. A guy who has Skills, the party will recognize that, but what skills are never explicitly stated. He tosses dead animals down in to the grotto. He’s helped establish the town and drove off the goblins and bugbears that once raided it. Without anyone every coming out and saying it, or even the villagers knowing it, you get the vibe that Old Bill is the rock the community was built on. Kind of like having that Strider fellow always hanging around. Bill sees a problem and Bill solves the problem. Just the rumors and stories of this guy, with what few words Dyson uses, paint a memorable picture that the DM should be able to easily expand upon. Given the emphasis on the nearby village I suspect that a half-column of text describing it, or rather a few NPC’s in it, would have gone a long long way. In the absence of any village info ration we must instead be content with a quite good rumor table. Not the best I’ve seen but it does do a good job of giving the DM some flavorful ideas of things to weave in to conversation. And that, of course, is the goal of everything in a published adventure: to give the DM flavorful ideas to build upon.

Dyson does a good job on the map. He’s known for that and this is no exception. There are multiple ledges, pools, ladders, giant mushrooms, a river, doors, multiple entrances, a nice multi-level entry hall, same-level stairs, a hidden area, almost everything on could want from a map. But it’s too small. It seems cramped. The entire thing fits in about half a page. It’s great half-page but all most Logos maps, it leaves you wanting more … but in a frustrated way. He’s also left the scale off the thing. I don’t need a graph grid underneath but a reference to the size of the main hall would have been a nice addition to give a good idea of the scape & scale of the place. He accompanies the small map with a rather aggressive wanderers table, with 1in6 every 10 minutes. It’s nothing more than the monsters to be found in the place, and while it’s not explicitly stated I did get the vibe they were to just attack outright.

The main/entry room is the most interesting. The entrance is through a hole in the ceiling, some 50 feet up. There are multiple LARGE terraces in the room, each of which serves as a launching point in to one areas of the adventure: bandits, bugbears, or undead. Each section has a small handful of rooms, three or four. Ladders go up to ledges, ghouls lurk in pools of water, and monsters are stuffed in to rooms. Most of the creature rooms are not hat interesting, just a lair room with humanoids in it. That’s a bit disappointing. Some additional notes or items in the room could kick off a more interesting encounter. The non-humanoid rooms tend to be a bit more interesting. Undead under a pool of water, for example. Or a weird statue covered in cobwebs. But there tends to be nothing more to anything in the rooms. The statue is just a statue. Maybe it’s meant to be leverage on the bugbears that also dwell in the caves, but the bugbears are set up (charmed) so that is very unlikely. Likewise one room has a bunch of giant spiders drained of blood. A clue to those who look but ultimately a rather simple room.

The main monsters, some vampire toad-people, are interesting enough, especially in this environment and especially if, as Logos mentions, the players don’t figure out they are vampires. The rest of the monsters are just straight out the book though. I’m sure the level recommendation comes from the vampires. There are a lot of bugbears and bandits but I guess I don’t see much of a challenge here for a 5th-8th level group. The mundane treasure is hit or miss, with some good descriptions on some of it and a very bad “assorted jewelry worth 11,900gp” in another part. The magic items are quite poor. +1 shield. +2 chain. The best is a snake staff that turns in to a snake to constrict people. Having a couple of the items used by the vampire toads was a nice touch, but ultimately the magic items are flavorless instead of being the items of mystery and wonder that they should be.

Toning down the toad vampires a bit, and making the magic items interesting would give you an adventure for, say, 3rd-5th level play. Lots of humanoids to deal with but probably manageable. I really want to like this one. It’s walking a line though, and is on the other side for me. I have exceptionally high standards though, so maybe its good for you. It’s free though, so why not check it out?

3 Responses to The Charmed Grotto