The Citadel beyond the North Wind 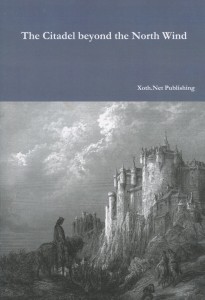 There is a land far to the north, past the black hills of Lamu and beyond the frozen moors of Tharag Thule; a dreary land of mist and thunder, where the white people of Yg have dwelt since ancient times. The free men of Yg tremble when fools dare to utter the name of Arkanth Mal, witch-king of Galuga, for he is the greatest and oldest of the tyrants of this primeval land. And now, the drunken bards of Tartuun whisper, the witch-king of Galuga seeks a new queen. For his minions sweep across the borders of Tharag Thule and Lamu, slaying men and taking only young women as slaves back to Galuga, the Citadel beyond the North Wind!

I have no idea what definition of “Old School” is being used to describe the XOTH products. It’s not one I’m familiar with. This is another bland and flavorless Swords & Sorcery adventure with no goals, plot, timeline, treasure, motivation, or anything else of interest. If you remove the crap you could reduce the page to just a single page.

I don’t know why I review the XOTH stuff. They have cool names, cool covers, and, more importantly, advertise themselves as Old School and are touted by fans as such. Uh … No. The idea behind this adventure is that some witch-king is kidnapping women and having them brought back to his citadel. He’s searching for a perfect body to resurrect his love witch-queen lover. She lives in a box much like the Ark from the Indiana Jones movie and her show owl familiar is flying around. There’s another evil guy living farther north, he killed the chick. Ok, that’s it. You don’t need to buy the product now. You know everything communicated in the product. Oh, there’s a shit ton more words in the product but it doesn’t amount to anything. Just meaningless description with no joie de vivre.

There’s a town that’s described but it has no flavor at all. It might be mechanically correct but it offers little in the way of action, excitement, plot, or anything else. “The North Gate is where men and women from other towns and villages of Yg arrive to barter their produce in return for the crafted items from southern lands.” Seriously? That’s part of the adventure? You’re willing to tell me that the moat is 10′ deep and the palisade 15′ high but not give me something to expand on and run with? There’s a hunter selling a large snow owl with perfect white feathers. Yup, the familiar. But it’s buried in otherwise meaningless text and not expanded upon AT ALL. Seriously, it’s not mentioned anywhere else in adventure. It has absolutely NO important at all. It’s completely up to the DM find some reason or excuse to do something with it. On and on it goes. Boring and meaningless descriptions, one after another. A bar/tavern with nothing interesting about it. Slave traders. A town hall and trading station. BUT IT’S ALL BORING AND MEANINGLESS. “The front door is brown.” Seriously? Why the fuck do I care? The NPC description are even worse. This being a 3e game the stat block is a quarter page by itself, per person, and then there’s some moronic description. I wish I could better communicate how stupid the descriptions are. There’s a physical description. There’s a description of their job. And there’s absolutely no information at all on using them in the game or anything at all inspiring about them or their job. The output from a random NPC generator would have been better than the descriptions included. There would still be no suggested uses but at least they’d have some character.

The actual Citadel has three levels: the Palace, the Prisons, and the Pits. “The Citadel is dominated by the palace of Arkanth Mal.” … With it’s thirteen rooms. “A frontal assault will be a disaster!” What, you mean from the six low level guards that are present in the place? The rooms as so So SO boring. Meaningless description with no flavor and no inspiration behind them. The prison and pit levels, with ten or so rooms each, have the requite tentacle abomination and the by now familiar boring rooms. The final section, the other evil dudes place, doesn’t even get a decent description. It’s just presented as a general outline. Uh … I’m sorry, I thought I was paying you for content. I see now that I was wrong.

This is as bland as bland can be while still containing the number of words it does. As bland as a 3.x stat block, maybe?

You want Swords & Sorcery? Go get that Blood of the Dragon adventure.

1 Response to The Citadel beyond the North Wind