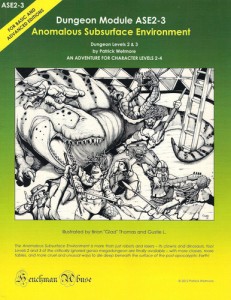 The Anomalous Subsurface Environment is more than just robots and lasers — its clowns and dinosaurs, too! Levels 2 and 3 of the critically ignored gonzo megadungeon are finally available — with more classes, more tables, and more cruel and unusual ways to die deep beneath the surface of the post-apocalyptic Earth!

An overall fine product with a lot of gonzo elements. It sometimes crosses the line from ‘goofy gonzo’ to ‘jokey joke’, and those are the lower points of the levels. That’s not too hard to fix though and if you’ve enjoyed ASE1 then you’ll want this also.

Continuing where ASE1 left off, this massive 144 page booklet covers the next two dungeon levels. Each level has about 130 rooms on it, and there’s a sublevel with another dozen or so rooms, and several large portions of the dungeon levels numbered with sub-parts. For the money you are getting A LOT of content here. There’s an absurd number of new monsters, at least 40, as well as new spells, new magic items, new tech items, new wizards, new NPC parties, and even a couple of new gonzo classes, like robot, insect man, or moktar. Patrick brings the content.

The level design here is as good or better than ASE1. The levels are large with lots of sub-areas and lots of corridors connecting them. This allows for a freedom of movement and exploration that most products can’t deliver because of their small/cramped map style. A decent effort is made to connect levels via multiple methods and non-standard paths. Slides, open areas water features, these are all used to connect levels. There’s also a decent amount of same-level stairs. The map does get a bit dry in places and some additional terrain and room features would be nice to see. If nothing else these do a good job add variety to combat. The map isn’t in Thracia/Benoist territory yet but it’s far FAR better than the maps in most products. It also does a good job describing some features of levels not yet explored/seen as well as having alternate entrances to the dungeon.

The dungeon levels have factions. This is a good thing. A VERY good thing. This isn’t just ‘lair’ factions but also includes ‘named’ individuals like The Bonelord or the Dr. Giggles. The various group operating within the ASE, along with the map complexity, should allow the party to approach their problem with varied methods. It doesn’t have to be a pure hack-fest. You can get new hirelings, maybe get some healing or stay the night. Team up with one group against the other, or go get some help to obtain the Amulet of Power, or whatever. This changes the dynamic of the adventure. Not only is the dungeon a dark and ominous place full of things that will kill you, now you have to be on your toes and on the lookout for potential allies and double-crosses. This makes the play far more varied and interesting. Me, I like to make sure the parties allies visibly and ostentatiously display their wealth. Nothing like turning the murder hobos in to murder hobo’s … now who’s doing the double cross Black Dougal? The second level has The Painted Men squaring off against the Necromatic Midgets and the Trogs. These three groups each know some information about the dungeon. What these groups DON’T have, and need are some immediate goals/problems for the party to participate in. They all want bodies, to eat, and that’s about it. Their rivalry for the level, and bodies, is mostly static. It’s referenced but not shown much. COmpare this to Level 1 of the Darkness Beneath where various encounters are with groups of trogs and crab-men fighting, or of trogs just finishing up a fight, or of an older battleground littered with broken weapons and body parts, etc. That kind of thing give you a sense of what’s going on in the dungeon. It makes it seem like the dungeon is alive and that the groups really ARE at each others throats. Level three has cod-men, goblins, a hinge-man expedition and an incursion by the moktars through a new entrance to the ASE. Again, the various groups know things they could share with the explorers but again, they don’t really have many/any goals past “kill the other guys.” If would have been interesting to have a couple of teasers about their plans to accomplish their dominion. “If only we could take the Birthing Pools!” or “We assault the northern corridors tomorrow.” Just a nudge towards some events.

The encounters are good. Laser attacks. A room that replaces your head with a different one. Giant lakes and caverns full of weird stuff. A door with heads nailed to it. An obvious trap with obvious bait (a cod-man egg.) Turning to any page and picking just about any random room will result in you finding SOMETHING interesting to interact with. I like dungeons having things to play with and explore. I like factions that allow you interact with monsters. I like a dungeon with a decent amount of variety and yet enough consistency to allow the players to ground their characters actions in certain sections. ASE2-3 does all that and it does it well. There’s so much stuff going on in this place that it’s hard to focus on individual elements to describe. Beyond the factions there are others in the dungeon. The Sewage Prophet: an otyugh so old and well-fed that he’s prophetic. The Man From Below is some stranger in a cavern wearing trog hides. Tranitaxin the Bone Lord is running around. And the there’s all of the traps rooms and all of the rooms with freaky-deaky stuff for the party to mess with. The depth and variety here is really impressive. There’s a wide variety of things for the players to have their characters explore with the DM. There should be a very healthy back and forth between the players and the DM as their explore black plates on the walls, globes of glass containing screams, and any of the seemingly ENDLESS wonders of the ASE.

And then there are the clowns and the circus. At some point messing around and having fun and being gonzo turns in to a joke dungeon ala Castle Greyhawk. Not Dungeonland-like but “Gamma World powered by 4e” bullshit. I’m pretty tolerant to this kind of stuff in actual play and I’m not opposed to seeing it in a product … in moderation. When a product TRIES to do this consistently then the problems starts to show up. Or, rather, my problem with a product starts to show. Humor as a byproduct is different than encoded humor which is different than a humorous setting. One of the first areas in 2-3 is a circus with clown-people, a big top tent, circus acts, carnies, and booth games. This is my redline that separates goofy post-apoc gonzo fun from jokey. It’s not too hard to tone down, even while running on the fly, I’d suspect, but it does leave a bad taste in my mouth. Getting ripped off by Castle Greyhawk when I was 18 probably has something to do with this, but, whatever.

I do, however, have a pretty decent tolerance for new items, spells, and monsters. I’ve got no problem with a toilet monster, or a Beard of Bees, or any of the other MARVELOUS new items or monsters. They are well done, fit the theme of the dungeon/setting, and are supplemented by a lot of non-traditional treasure, like silver wiring and the like. This sort of the thing isn’t done enough in adventures. Players are TERRIFIED of new monsters. They never know what they can, what they are immune to, if it level drains or eats their eyes or whatever. There’s a new kind of trapper, this one resembling a curtain … or maybe “sewn together skin parts that are being used as a curtain.” Ouch! Likewise the Sword of Unlife, or a solid silver skeleton contained in a red dehydrated gelatinous cube are the kinds of interesting treasure I’d expect to see in an adventure … and generally don’t. Why would anyone ever put in a “+1 sword” when you could put in “Aidru, Slayer of Men. Continually slowly drips blood because of all the people it’s killed.” THEN you can give it a power. Even “+1”. I’ll take the Sword of Unlife and Aidru, Slayer of Men over a hundred +1 swords. Players get attached to unusual and unique magic items, be it their powers or their descriptions. They have their characters hang on to them long after they are useful. That’s the kind of thing you want to have happen in your RPG.

It’s not clear to me that this COULD be better than ASE1. The first ASE was a decent departure from the bog-standard D&D world and contained so much interesting setting information that it seemed like a bolt from the blue bringing gonzo mana from heaven. ASE2-3 CAN’T have the same impact ASE1 had. It does, however, build well on ASE1 and provide another couple of marvelous levels to the complex. I’m a tough reviewer. Don’t let my nit-picking get you down. If you you have ASE1 then you should go get this also. And if you don’t have ASE1 then you are a tool and need to go buy this AND ASE1.

Seriously though, why haven’t you picked up ASE1? It’s one of the best things ever put out by the OSR. Oh, I’m sorry, are you too busy genuflecting to a 30 year old TSR adventure? Look man, I like S3 and G1 also but they are THIRTY YEARS OLD. Expand your world-view a bit. I’ll tell you what: You go get a _good_ OSR product and we’ll consider it an apology for you never buying a Judge’s Guild product back in the day. Cool?