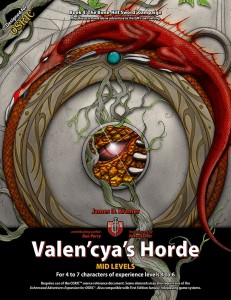 Wild tales spoken in hushed tones over half-filled mugs of strong ale fill the adventurer’s ears of a dragon so ancient, she is said to be literally decaying from old age. And what treasures would such a creature have amassed? Adventurers have long dreamed of the riches that must be held within her caverns located in the volcano know as Adskut.

This thing is large, coming in at around 88 pages. It’s inexpensive, coming in at around $9 at Lulu. Both of those metrics are deceptive. It’s MUCH larger in scope than 88 pages or $9 would imply. This scope and scale are where both the quality comes from and where the adventure falls down. And how can this be? Well Mr. Haderach, if that is indeed your real name, It is completely full of surface detail. It’s the kind of thing that makes up a great setting locale for your group to have an adventure in but then doesn’t provide much in the way of hooks to fire the imagination. Even that statement is unfair since there ARE things scattered around to work with. My overall impression of much of G3 was “just another room with fire giants in it” and that’s my impression of PARTS of this as well. When takes as a whole though you get a picture of a dragons domain. And not the picture that G3 provided, but a much better view of the lair of a powerful creature. A VERY powerful creature. Kramer is seriously a nut job. Take a look at one of the region maps: http://www.usherwoodadventures.com/support/images/geography/centralcontinent.jpg That’s the kind of content you get from the guy. I’m not sure I’ve EVER seen maps that good.

Kramer must be a killer DM in his home game. His content is HARD. I recall looking at Ychyrn, the first adventure in this series and thinking “Son of a bitch! How the hell are characters supposed to survive in this place?!” Yeah, well, while looking over the main lair in this I was left thinking “Son of a bitch! How are characters supposed to survive in this place?!” The adventure is for levels 4-6. The main bad guy is something like 14HD. And is encountered in a room full of minions. TOUGH minions. The players routinely encounter 4HD enemies in groups of 15-20. And the traps! Even a prescient Admiral Akbar is going to have a tough time with all the traps in this place! But what all of this adds up to is a decently realistic depiction of of the fortress of a powerful and long-lived evil creature. The lair is a GREAT depiction of this, with plenty of lead in to work the players in to a frenzy of dread. This entire adventure FEELS like a trip to Mordor. “Holy shit holy shit holy shit!! I can’t believe we’re trying to do this!” *pukes on shoes*

What you get is a little regional setting with some room for expansion as well as a dragons lair. The area around Pelican Bay is described. This includes the town of Pelican Bay and the isles and seas nearby around the main island of Valen’cya. The seas around the main island are divided n to about ten sections, each with it’s own brief description and wandering monster tables. The fifteen or so islands are each described as well, along with their own wandering tables, although all but one are quite small. The main island is divided in to ten or sections, again each with its own description and wandering table. Scattered throughout the region descriptions are small bit that a DM cal follow up on. An old temple at the top of a beak, or a mysterious crypt on a island, or some kind of undersea kingdom or great ocean rift. This is further supplemented by three two-page sections in the rear of the book describing the towns of Usherwood, Pelican Bay, and Aquila. The hills, streams and ponds all have names and hooks are scattered liberally about. “Bob the Miller also secretly supplies the Pirate Guild with information on cargo coming in and out of Pelican Bay” Anyway, the regional sections are done fairly well and are quite extensive. I might like a few more hooks here and there. Or more detail on a village or two or a ship or two. And that’s the issue: I don’t think the regional material knows what it wants to be. There’s not enough ‘things’ for it to be a hex crawl and there’s not enough ‘details’ for it to be something like a village supplement or regional supplement. What it most closely reminds me of is the sea voyage in Isle of Dread, and maybe the hex crawl of the island also … but without the ‘special’ encounters on Dread. What you end up with a landscape with regional color and a sparse population of hooks. That not necessarily bad, but it is a bit unusual.

The main adventure takes places in a cave complex in the main island. This is the dragons lair. The map is large and FEELS large. There are lots of twists and turns and secret passages between locations and terrain features. And the lava. Lava with ledges around them. Lava with steel ropes over them. Lava with stone bridges over them. Lava that splashes. Bridges that are collapsing. Eek! Kramer does an excellent job on the map, but you really need the high-res one he provides on his site. The book version is too small and the detail is illegibly small. This lair feels large. It feels like some place a dragon lives in. I think it helps gives the adventure a feeling of scope and scale. Combined with the expansive overland and sea journeys I think the party will really get the sense they are GOING SOMEWHERE. This ain’t a walk over the kill to kill something in a 5 room hole in the ground. The adventure develops and the party is going to have to actually seek out the dragon and its lair.

The encounters here are a mixed bag. First, EVERYTHING in this is trapped, and in quite a few cases TRIPLE trapped. Ouch! That’s not so much a problem but the various room encounters are. Many of them feel …disconnected? There’s a cave of giant spiders. There’s a cave of hordlings. There’s another cave of hordelings. And another. And another. There’s a cave with a stunjelly. The issue with these chambers, and many more, is that they are just monsters sitting a room waiting to get slaughtered. The stunjelley is “The furthest portion of the cave wall is currently occupied by a large stunjelly.” “Four red dragon hordlings guard this iron door.” There’s a LOT of stuff like that. Then there are the encounters that take four or five paragraphs to say, essentially, the same thing. There’s a kind of … mundane quality expressed in many of the rooms. To be sure, there’s also the lava rooms and the weird armor guy room, and the room of the golden pond, and the room MADE of gold as well. I don’t know, though, they just didn’t make as much of an impression as the great quantity of the mundane. It could be that the party will encounter room after room of the mundane and then be amazed by the non-mundane rooms. Something just feels off about the rooms. There are allies to free and some other folks in the facility to befriend, but there’s really not as much faction play going on here as one might imagine. Everyone seems to fall in to line and not have any ambitions or hatreds of their own. That’s a tad disappointing since it would have made the dragons lair a lot richer and perhaps provide more play options. When you take the entire cavern complex as a whole, instead of examining the individual encounters, you really get the sense that this is the lair of an evil overlord. It feels large and impressive and populated and guarded and like a real place.