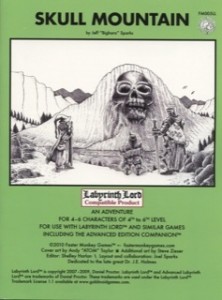 SKULL MOUNTAIN – Dreamed of by thousands.

If you know what Skull Mountain is, from the Holmes set, and know nothing about this product then I suggest you stop reading and keep it that way.

Skull Mountain refers to the sample dungeon cross-section in the Holmes blue box D&D set. That piece of artwork in Holmes is a masterpiece of invoking the imagination. Volcano’s, lakes, caverns, multiple levels, and of course a mountain face carved to look like a skull. Therein lies the modules major issue. The old farts, myself included, have been dreaming of this ting since they were 10-12 years old. Like Episode 1, it’s doubtful that any product could live up to something percolating in a young boys imagination for 30 years. Related, Tom Bombadil looses something when he gets stats and a history. And then you don’t have that part of you anymore since the sense of wonder is taken away. That’s perhaps a bit too maudlin, however I am worried that my sense of nostalgia will get in the way of a review, so keep that in mind.

Two things are evident about the module. First, Jeff has changed the map ever so slightly to allow for a few more stairway/travel options, which is a very good thing. You probably won’t notice this unless you compare the versions side by side. Second, he’s put an incredible amount of thinking in to this. The dungeon that’s described certainly matches the original map, from the island, tower, and domes (3) in the final level to he position of the giant cavern formations on levels 5 & 6. He must have gone over the thing with a magnifying glass. He also has probably put an incredible amount of work in to a backstory, and denizens, which fit the map. The backstory makes sense, as do the occupants.

What we have here is the lair of an ancient black dragon, and as such it is probably the best example of a real dragons lair. These things are supposed to be old, very intelligent, and use spells; generally they are not portrayed that way. Our friend, Mr. Black, finds a cave complex in a mountain that bears a passing resemblance to a skull. He uses his powers to pretend to be The God of the Mountain, cowing a group of bandits in to worshiping him. That tends to be a Naga schtick, but he gets away with it. Over time his cult grows and expands the cavern system, as well as tidying up the rock outcropping so it really does look like a skull now. Eventually a volcano eruption causes some issues in the dungeon complex as well as with the cult. The Survivors on the outside loose their cultural identity and become bandits again, with some clever name evolution by Jeff. The same eruption brings some lizardmen to the dragons attention, and he plays god to them. Eventually he regains a group of cultist followers derived from a splinter group of the bandits. This perfectly explains the layout and names on the Holmes map, as we ll and providing fodder for the creatures and areas encounters in the adventure. The adventure hook is that the bandit/cultists have kidnapped the son of a guard leader in a nearby town that was pressuring them too much. The PC’s are sent in to get him.

Now, for all you prospective rulers out there, let me give you some free advice. If you live near a mountain with a giant skull carved in to it, with a cave system underneath, you might want to deploy a lookout or two and/or make sure your patrols in the area are strong and numerous. Yes, it’s going to cost more, however I believe my own attitudes would be typical of your common citizenry and I would be more than willing to pay a little more to make sure nothing ill happens in that area. It’s just good insurance.

The two major groups in the adventure are the bandit/cultists and the lizardment/cultists. The vast majority of the encounters will be with one of those two groups. Every level of this complex is used by intelligent people so there are no/very few encounters with anything other than the cultists or lizardmen. This means few to no encounters with vermin, which greatly saddens me. In addition the levels proper are quite small. I will admit a bit of disappointment when seeing the level maps however I’m pretty sure that’s ‘Expectations’ talking. Each level is quite small; the largest level on has about five rooms The domes on the bottom have 12 or  so rooms in one of them, but that’s the exception. There ARE multiple ways to get between levels, which is generally a very good thing, however the levels are so small that this doesn’t make sense; you generally won’t avoid an area by taking the back way since there’s not enough room to explore/sneak.

The trick & trap quotient is a little off also. There is a maze full of classic traps, pits, arrows, deadfalls, etc, which is used as a training ground for the priests, and some locked/poisoned chests, however I’, generally looking for more. The trick quotient is less then I’d like also; only a few are around although they tend to make sense in the context of the background. Wanderers are another problem; there generally are none until you get to the caverns own below. Then again, everyone is so close together up above that they should hear any combat going on and show up. There’s only one new monsters that interesting at all, the others being an advanced form of lizardman; advanced in the HD/AC/damage sense. There are a couple of encounters in the module that feel like they are out of 4.0: a dramatic set up n a fantastic location. Otherwise things are pretty straightforward, and I suspect there will be lots of fighting because of the lack of factions and Generic Bad Guy syndrome. There are about 36 encounters/rooms over the first nine levels and about 34 in the tower & domes at the bottom.

The layout resembles that of a lair dungeon. It’s quite small with a couple if interesting features, provided mostly by Holmes. Not a lot of variety, which probably makes sense given it’s size. Everything that is present makes sense in a way that few modules do. I will complain the text and column layout is probably TOO large for me, and while I don’t mind buying the monsters & traps in the text, it would have been nice to bold them to draw attention to them more quickly. This is one of the best dragons lairs I’ve seen described … however I can’t bring myself to think of it as THE Skull Mountain … however unfair that is. Then again, it’s unclear if anyone else’s Skull Mountain can ever match the one your built up yourself over 30 years.