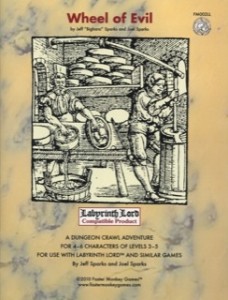 Ok, listen up: Do NOT bail on this review no matter what your first instincts are. I swear to you that this module is awesome. It is about problems that a guild of cheesemakers is having. There, I said it. Still here? Good! I know, I know; “The guild of cheesemakers is having trouble” and “save the cheese in our aging caves” sounds like the worst possible adventure; kind of like the worst dreck out of the d20 era. But the cheese is just the hook, and is a pretty damn good hook also. The adventure is for 4-6 characters of level 3-5.

We have a certain town and surrounding area that makes a good portion of it’s income making cheese. Every year they toil and trouble and then hold a big cheese sale during which they make most of their yearly incomes. Everything rides on their sale, and they have a problem. Now, remember your promise up above to stay with me? Time to test it again: The cave where they age their cheese is having kobold problems.

Ug! There we go again! Kobolds! WTF? Can’t the writers think of something better to use? “Generic humanoid monster/kobold #65423 dies by your shortsword. You get 8 cp and a rusty shortsword.” No! Not this time! I promise! The kobolds here are well done and not just PC fodder because the writer thought he had used too many giant rats. You see, after living for years hidden from the cheesemakers the kobolds now find their food sources infected with deadly mold. Curse you and your Fontina! You will pay! But you see, that’s all backstory. The PC’s only get to deal with a couple of kobold prisoners the town folk have captured. And the one kobold you speaks common does so with a pronounced accent: “Koboldz don’t vant no stinky skveezinks!” and so on. What? A kobold with an accent? And a motivation other than simple mayhem? What’s going on here?!

It turns out that the cheesemakes cave is linked to the kobolds caves, which are deeper in and not described. And both caves are linked to the Evil Ones cave. Ah yes, The Evil One. A creature from before time with alien values, a good touch of amorality, and a lust for dominance. This particular brand of Evil One is a mold/fungi/spore/slime creature from the beginning of time. Hence the tie in with the cheese: he’s trying to taint some of the cheese so that when the towns folk send out their samples, and this BIG wheel of cheese to the Baron, it has the mold masters mind control fungus in it. See! It makes perfect sense! Mold Monster taints human cheese to take over the world. Mold Monster also taints kobolds mushroom farms. Kobolds think humans moldy cheese is the cause. Humans don’t like kobolds destroying their cheese. And everyone lived happily ever … oh no, wait. Everyone has a foul disposition. The towns folks incomes are at risk while the kobolds food supply it at risk. Meanwhile, the Mold Master plots, schemes, and makes more monsters.

This place is CRAWLING with slimes, molds, fungi, ooze, jellies, and other assorted nasties of the ilk. I LOVE it! I’ve always had a soft spot in my heart for the proud & noble Vegapygmi’s from Barrier Peaks. A lot of OSR modules use yellow mold and green slime, so there’s a lot of OSR love for the fungi also. Having a module centered around it is wonderful. All told we get 18 pages, including the 2 map pages in the inside of the front and back covers, and 19 keyed locations in roughly 3 areas of exploration. There are some good tricks/traps, and six new monsters, as well as four player handouts. Background/introductions are kept suitably brief at only 2 pages, which combined with the table of contents and license page means that most of the module is devoted to the keyed locations and the new beasties. The monsters included are suitable unique with nice powers & vulnerabilities. It’s got a possible allied faction, the kobolds, if the party handles things correctly. Remember that cheese sale? I hope the party does. Too much fire/smoke/contamination, or too many rumors getting out and it’s going to ruin the cheese sale, which means less reward for the PC’s, since they are being paid in shares.

I LOVED this adventure! I initially put off reading it because I looked at the front couple of pages, but I was wrong Wrong WRONG. This is a fabulous and well put together adventure. Quite a bit of thought must have in to it on what produces GOOD gameplay, and it shows.

Now, go do a google image search on ‘Slime Molds’ and get ready to run The Wheel of Evil!

1 Response to Wheel of Evil