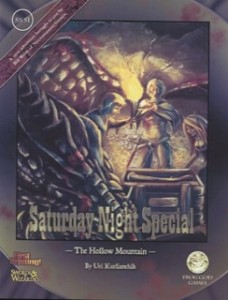 This adventure takes place in a hollow mountain, in a realm of giant petrified mushrooms with a complex carved in to the top of the most mammoth. The groups adversary is The Tree That Sees, one of the young gods first creations, now abandoned & embittered. These are the roots of a GREAT adventure, however the editing & layout of this module (the First Printing) does a good job of making it almost impossible to enjoy.

Through the hooks & adventure start the party learns that some formerly peaceful nomads are now on the war path and conducting raids and capturing hostages … who are not seen again. This takes place in first three columns of text in the module. Short, sweet, and to the point. I love terseness in a background; I don’t need fives of the designers magnum opus in world history. Give me the lowdown, the basics of a hook, and get me going by leaving me with my options open. There is some significant boxed text in the opening encounter/introduction, which I did not like. Again, give it to me tersely and me get on with it. I will note that this is, perhaps, the last clear thing in the module.

Next we need to assume that there’s an overland forest adventure prior to arriving at the hollow mountain. That must be the case since the next section is ‘The Forest.’ Inside the forest lies the hollow mountain. It’s about 12 miles NE of the nomads camp. The nomads camp is a couple of hundred yards from the opening encounter/introduction. That’s it. No map at all. I hope the PC’s know that the hollow mountain is their destination, because no one has mentioned it yet. There’s a wandering monster table, but it’s unclear if it will ever get used. The instructions are to check every 4 hours with a 1 in 4 chance of a wanderer. Note that the hollow mountain is only 12 miles away from the nomad camp. I’m pretty sure _I_ can walk 8 miles in 4 hours, so it’s not clear to me that a party will ever get to make a wanderer check. There being no map and no forest encounter locations then there is no way to really have an outdoor adventure other than to maybe roll once and then declare that the party is at the mountain.

The next section is about the Giant Mushroom Cap. By slogging through the text multiple times I was able to figure out that the hollow mountain is hollow and contains a single large cavern full of petrified mushrooms and that the nomads live in the cap of the largest one. ‘Slog’ is not quite right; That information is contained in the first sentence, but is the ONLY description of the hollow mountain, either of the exterior or the interior. I had to go back and hunt & search to make sure that was the only description. It was. There are no encounters inside the hollow mountain except for the mushroom cap. The description of the mushroom cap notes that some of the water areas are partially submerged, show in light blue on the map. The map is actually in black & white. I _think_ the shading on the rooms keyed #19 & #26 on the map is darker than the others, but I can’t be sure. Good luck.

The mushroom is a mostly linear dungeon. There are at least four factions in the dungeon, competing for the love of the Evil bad Guy, and they won’t come to each others aid, however it’s not clear from the map where they reside. You’ll have to dig through the text and maybe highlight the different monster types in different colors and then note on the map where they live so the appropriate people come to each others aid. Oh, yeah, about the map … it’s keyed wrong. There are supposed to be about 26 keyed encounters on the map however it looks like the descriptions for five of the room were cut out, but the numbering continued. It doesn’t appear to be five rooms in a row; the room labeled “18” on the map appears to be #16 in the encounters, and the room go up to #26 on the map but only #21 in the book. It is NOT the case that five were cut out in a row, it seems to be somewhat random. The last room on this level houses the most powerful & evil of the Tree’s servants, the dragon Mavetofel. No stats are given anywhere in the booklet that I can find.

The next section is level2: The Temple of Roots. It appears to be located in a gigantic cave above the mushroom accessible only through the use of flight. No other location information. This most closely resembles a small six room funhouse dungeon. Well, there are six rooms numbered on the map, but only five in the text. It’s a proving/testing ground of old, with a couple of the tress cultists thrown in. That will eventually lead to Level 3: The Grove that Should Not Be, where the party will find The Tree That Sees. THAT is a pretty cool/bizarre/weird encounter with a creature born when the world was young. I thought it was a pretty cool creature,; lots of random effects and eyebeams from a creature straight out of weird fantasy. Finally, Level E is the Tomb of the High Priest, a two room map. Note, ‘E’, where the previous levels were 1, 2, 3. I _think_ this is a room/level that is an offshoot from the funhouse/testing ground level, but I can’t be sure. It says “Like all Lizardfolk chambers” and ” accessible through a small well-hidden trapdoor in the southern pole.”

I’m mostly at a loss about this module. It has some great ideas but someone, somewhere, screwed up. It _could_ be taken as a kind of “GM’s notes” kind of thing. By that I mean, it resembles a bit how I used to construct my own adventures. Just some ideas and a few sentences, maybe one per area, to make sure I remembers the feel and ideas I wanted to get across. Then someone may have come along and greatly expanded on certain sentences, while trying to tie the others in. Or, maybe they left out a few pages in the printers. The editing is bad enough that I can’t really tell one way or another. In any event, The Mushroom Cap concept is a nice one, and one I may steal for my own game, but the dungeon presented in it is very linear and mostly just a slog-fest of fighting. I spent so much time being confused by the writing and map that I _feel_ I may have missed something, however I’m pretty sure that’s not the case; what’s I’m missing isn’t there to begin with.