Tomb of the Bull King 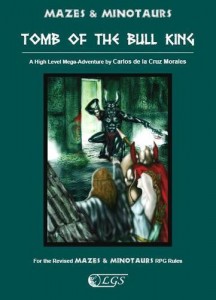 A sinister curse has fallen on the colony of Coristea. Ancient powers have awakened, forgotten secrets have been unearthed and dark monsters once again threaten the land of men. Will your heroes brave the dangers and mysteries of the Tomb of the Bull King?

Holy shit, how have I missed this? This is a large adventure with 245 keyed encounters described over 211 pages that takes place on a greek island. It has VERY strong roots in greek mythology. It’s for the Mazes & Minotaurs game. That game postulates what D&D would look like if Gygax developed the game around Greek myths instead of Tolkein. It’s close enough to D&D that you can it on it fly without too much trouble, but I suspect the core rules (also free) would add a lot to the experience of running this. It’s set in a floor-plan of what looks like the actual palace of King Minos of Crete aka: the original home of the original Minotaur!. It also looks like many of the rooms in the adventure are based on the actual rooms in the palace. The floor-plans, “greek-based D&D” and “actual rooms” are not gimmicks. They all work out really well. This is TOTALLY worth checking out. It ends with a bad ass EPIC mass battle. Sweet Adventure!

You need to go download this. NOW. Looks, I’m even going to give you the link. This is it: http://mazesandminotaurs.free.fr/TOMB.html Click on it. DO IT! DO IT NOW! It is TOTALLY worth it. This is the kind of thing you are looking for when cruising the Internet looking for content. This is the sort of awesome thing that is out there, hiding behind all of the other dreck. Yeah, it’s for a clone that you don’t know anything about. Macht Nichts. The clone is free and it’s close enough to D&D that you don’t need it. [And is one of the more interesting ones, I’d say, just from what I’ve learned about it from the module.] You’re looking at a full on D&D-like game, but based in greek mythology instead of the default Tolkein-land of standard D&D. What’s great about this is that it FEELS like what’s it trying to do, or at least the adventure does. I’m no scholar of greek myth and history. All I know is from pouring over mythology books as a kid and watching Harryhausen films. This FEELS like that. A little bit of the classic greek myth, a little bit of the silly monsters, and a test that communicates both.

The three page into/background feels like a greek myth. Kings with hubris. Brothers loving sisters. Betrayal. All of that great greek undercurrent, all of those classic tropes, presented in a brief little bit of history on the situation. I usually rail about longish intro stuff. Not this time. It moves fast and it does a great job of communicating some classic greek tropes without ever feeling heavy-handed or forced. The hooks try to follow this up but, perhaps, fall a little short. I’m torn here. One the one had they are classics but they seem … just a bit flat? Terse? I don’t know. Oracles, heralds, Hermes relaying a message from Zeus … they all have a bit of greek flavor to them, even though they are just two sentences long. This ‘greek tropes’ show up again on the island when the players reach the main city/town. There are three little flavor encounters presented, each just a couple of sentences long, that serve to set the mood for the palace encounter/meeting/job interview. A street fight between townies and immigrants, a grieving man wailing and shouting omens. Bloody symbols above doorways no one will talk about. This does an EXCELLENT job of creating a certain mood and acting as a build-up to the main event in the city, the job interview with a wounded king. You see, he was wounded by the demon minotaur and his sage says he needs the horns of the beast to be healed (Classic!) and the party is tasked to go get them. I don’t like job assignments in my D&D but this is GREEK D&D. If we ignore poor old Gil then this is the origin of much of our western hero. You get a pass on being stale when you create the trope. Besides, it’s well done. The king asks your names, your family history, to hear tales of your deeds. All of the usual stuff kings do in old stories. Sweet! If you gotta be a hero then you should be treated like one in a non-throw-away fashion, and this does that.

The main adventure is in an old ruined palace in the middle of the island. It’s a pretty sweet map! Probably because it’s THE REAL RIGGING MAP OF THE PALACE OF KING MINOR OF KNOSSOS! You know, of Mr Minotaur and Mr Maze claim to fame? It’s complex. REALLY complex. This one if going to take some time to explore. Several different ways in. Several areas open to the air as courtyards. Lots of hallways, lots of “sub-areas.” I suspect that the party can get to almost any section of the map quickly if they were to choose to. It’s a pretty decent open-concept setting style map. You might think of them as a large number of lair maps laid out and placed next to each other. Google the real floorplan, it’s the actual map used. Some areas have wanderers, some don’t. The wanderers are usually guards of the area you are in, the ‘Lair monsters’ out patrolling.

There’s a pretty strong diversity of encounters between traps, unusual stuff/tricks, and monsters. There are a METRIC FUCK TON of factions running around this place, each in their own little sub-section lair. The idea is that the group will travel around meeting them, interacting with them, killing them, allying with them, hunting them, getting hunted, and maybe going on a quest or two for them. There are prisoners to free, jewels to recover, tombs to find … a WHOLE lot is going on. It reminds me a bit of the Lost City of Gaxmoor … I haven’t read that but The Pretty Girl ran it for a few months and it seems very similar. There’s a pretty good feel that the place has a life of its own and the group is just coming in and getting in the middle of it. It’s a great location sandbox to have adventures in. The very end of the adventure, where the Bull King is met, is the only slightly railroady part. When fighting him the battle has two parts: a solo battle and a mass combat. Not every railroad is bad and this is a good example of a good one. After an EPIC long adventure in the ruins the adventure needs a climactic end and this happens. The Bull King summons his horde from the pits and then the parties allies that they’ve made show up to do battle. The bad guys can have ogres, boarmen, wolfmen, goatheaded demons, skeletons, ophion, harpies and The Beastlord (and his minions). Giant snakes, trog, wildmen, a dragon, griffens, cyclopes, and a bronze colossos can show up to help the party! All the while the shades of the undead erupt from the pit from the underworld and are joined in battle by brave ghostly warriors … While the Judge of he Underworld and The Queen watch the battle from a balcony overhead!That, kiddos, is a fucking payoff! You’ve been in this place for MONTHS of player time. You’ve killed tons of bad guys (which deplete their forces for the final battle) and maybe made some allies (or killed them) or done some deeds (like help a mage get some jewels so he can finish his statue work.) Then, at the end, it all pays off. You had very little idea but BAM! As a player that’s exactly the kind of payoff you want after a hard long game. This is the kind of shit that all of those railroady things try to do and fail at. That’s because there’s no investment in those things. In this the players have worked their asses off and gained some familiarity with the place. When the good ghosts show up that MEANS something to the players because they helped enable it and were not expecting it. Their actions had consequences. Your players are going to remember this for a LONG time to come. And did I mention that the wildmen can ride giant spiders?!?! This ain’t some boring old AD&D thing. This is just as bad ass as ASE1, but in a classical way.

I totally want to ditch my entire campaign now and run this. I’m not sure there is higher praise.

Oh, and you TOTALLY have to put AC/DC ‘Thunderstruck’ on repeat during that final battle!

5 Responses to Tomb of the Bull King