The Slave Pits of Abhoth 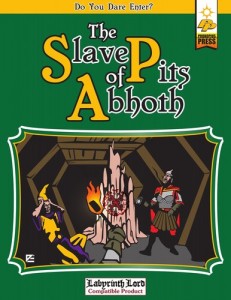 This is a reimaging of the A series of modules. It uses Realms of the Crawling Chaos to give it a different feel and carries over very little from the original series. Crawling Chaos does give a nice alien/weird/Kua Toa feel but the adventure is hampered by a lack of above-ground activity. It tries to be minimalist. It succeeds. Minimalism sucks and lacks flavor. This could be turned in to something very awesome if someone put some effort in to it. Like, say, You, Mr. Home GM.

I’m gonna say, right up front, I don’t know if this review is fair. The designer set out to do certain things. They did them. I disagree with some of the choices made. I don’t think they work.

The A-series of modules, Slavers, make a pretty good tournament module series and a pretty crappy series for anything OTHER than a tournament. Linear, non-sensical, and without a decent set up. G1 didn’t have a set up but it didn’t need it. A1 does. The designer has taken the core concepts of the A series and reworked them in to something that is completely different. Gone are the boring old A series slavers. They have been replaced with Deep Ones (and company) from the Realm of the Crawling Chaos Lovecraft supplement. This works and it works WELL. Gone is any moral ambiguity about saving people from slavers. Now we’ve abominations running about capturing people for breeding, selling them for slaves, melting them, and all sorts of other nefarious purposes. Deep Ones work perfectly, as does the Lovecraft mythos. This should come as no surprise since it worked so well in the original Innsmouth story.

One of the major flaws comes to the top immediately: the surface sucks. There is a very small amount of text, about a page, that describes four locations on e island. There is also about two pages describing a village on the island. The village, island, and a couple of other places, are completely unsatisfying. They lack anything that would allow a DM to run them as anything other than a hack. They are just a collection of place descriptions with monster descriptions in them. Buy this I mean they are in ‘Dungeon Format’ mode. “A small hovel with two halfbreeds in it.” and so on. The players are investigating a slave ring but all you get is ‘monster format.’ There’s no suggestion of conspiracy. There’s no list of personages to be found. I guess that once you get on the island you are just expected to start hacking until you reach the end. That’s a shame. Taking the emulation of Innsmouth a bit further could have resulted in a wonderful town/area setting with an underlying cult activity. Something like N1 maybe. Instead we get next to nothing useful. I know there’s a dichotomy between drop in material and depth but this takes the situation to an extreme. Given that this was a problem with the A series I wish it would have been included.

The dungeon is pretty big, 140 rooms or so. There are multiple entrances to it over the island but ultimately it is just a series of small lair dungeon tied together with linear sections. This is EXTREMELY disappointing. The maps are large and the maps are visually interesting but they remind me much much more of a 3e or 4e era map, the kind of small cramped sections, than it does a full on Old School design. I can understand connecting different section of the island via tunnels but the ‘area’ dungeons are just a collection of small lairs with simplistic design. This makes the description format vert easy: a small map of 5-8 rooms appears on one page and the descriptions appear on the facing page. Nice & neat. And lame. A couple of branches do little to remove the linearity of the original A series. Yes, you can go Right or Left for a bit, but the dead end of the branch looms large. The maps are cool. They look great. They have great detail. They just don’t provide the exploration element a decent map should provide.

The keying is minimal, and that’s by design. And that design fails. You can key minimally but the minimal key has to provide the seeds that allows the DM to run a great run. “The walls of this room are lined with shelves full of tools” is not a good minimal key. Nor is “the wall of this chamber are covered in iconography.” “The icons are in good condition and depict the lives of the followers of St Cuthbert on the Island.” You’ve got to work to pull out interesting things in these. The rooms, for the most part, feel static. ‘A’ had issues but it also had some nice encounters. This seems to lack those sorts of encounters. Just rooms with monsters in them. Cthulhu-esque monsters are nice but that doesn’t make up for the extra bits of fluff that are missing. There’s also a lot of ‘insert your own god here’ or ‘insert some prisoners here.’ I’d prefer to have had the designers in these sections. That would have added some much-needed fluff. I can always replace them on the fly, or planned, on my own while running the adventure. Without that though it seems … empty? It needs more detail to make the rooms come alive. I’m reminded of the ‘The Giants Kitchen’ thread on the therpgsite and how certain edits of that room, while seeming to keep detail, did away with the whimsical nature of the room. The same thing seems to be going on here. The … inspiration? behind each room is missing. That turns it in to just a collection of rooms, all of which run together after awhile. The cthuloid monsters are good, I love new monsters and what they can do to freak out players, and they fit perfectly in this. But, again, they seemingly lack inspiration. They just ARE, with no build up. The build up is missing. Likewise there could have been room for some truly interestnig cthuloid magic items but that doesn’t happen. The mundane treasure is mostly boring (6 gems, 2×50, 2×100, 2×200) and the magic, with a couple of exceptions, is just boring.

The whole thing feels like a bad hex crawl or collection of side-treks instead of a coherent whole. It’s still worth checking out, since it’s free, if only to steal the idea the designer reimagined.