The Caves of Cormakir the Conjurer 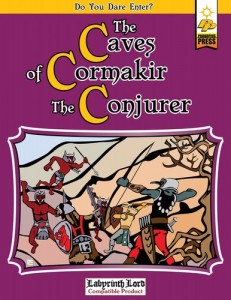 Answering the question: What if the monsters in BASIC/Moldvay were from the Fiend Folio? What if B2 used those monsters?
Here’s a partial answer …

This is a crawl through a 100 room cave and dungeon complex. It is composed of many sublevels with each sublevel having several exits from it, kind of like Rappan Athuk is laid out. It has a strange vibe to it … it certainly brings the weird but it also seems to interweave the fantastic with the mundane quite a bit, in terms of room descriptions. There’s something interesting here but for the full experience a DM is going to have to spend some time thinking about it and working it up. It’s probably worth it. It is freely distributed so you can take a look for yourself.

THis is a strange little beast. The dungeon presented is clearly inspired by B2, and borrows several themes and general ideas from it, but it doesn’t COPY anything in that module. Completely different map and completely different implementation. Combined with the monsters from the Fiend Folio you get a strange view of how D&D could have started out in a parallel universe and the module that would have launched a bajillion campaigns. It’s NOT the dry old B2 implementation that we’ve all seen before but rather something with a much more Holmes/OD&D feel to it. Transformation pools and weird edible mushrooms, strange machinery and the like. This is a kind of feel that I strongly associate with OD&D and try very hard to incorporate in to my own Magenta games. The combination of those elements with the monsters from the Folio creates something interesting … in feel if not in execution.

There’s a page of background here that does a decent job laying out the core of the dungeon. About a third is recent dungeon history that the players might pick up in a town or settlement. Another third is the actual dungeon origins that can help the DM orient the various rooms. The final third explicitly calls out the themes in the dungeon and some guidelines on running it. Essentially, the dungeon is about greed and the climax will see the players being tested for their greed. The idea is that the group encounters several situations in which greed can take part. Choosing greed probably ends up having some bad consequences. At the end the party has learned, through the accumulation of these experiences, to not touch. I groaned a bit when I read it, but hey, whatever. At least there’s a method to the madness. I’m just not sure how strongly that message is communicated or if it can work at all in a BASIC game. It would seem to me that the PLAYERS have to learn over time how a campaign world works. The ‘rules of the world’ need to be consistent so the players can make well-formed decisions. If the dark always holds monsters then the group knows to be extra careful of the dark, etc. This adventure is meant to drop in but turns on its head one of the fundamental features of an older D&D style: Get the Treasure! As such it almost seems to have a style more at home in 2E or 3E games. I’m still not really clear on this though and I’m conjecturing a bit there.

The maps are pretty varied. Just as in B2 we get an initial outdoor map showing a ravine with five cave entrances, some nearer the floor and some higher up, some closer to the mouth and some closer to the back. Unlike B2 there are some hints, from the outside, of what you’ll find inside. Moist air, humid air, loud clanking sounds, low buzzing sounds, etc. The layout the maps remind me a lot of the Rappan Athuk style. By this I mean that each cave is broken down in to sections and each sections gets its own map. These sections tend to be small and have several entrances and exits from them, both like RA. I’m not sure this style works. I understand what they are trying to do but it feels … disconnected? somehow. I like the various entrances and exits and I like the concept of separate sub-areas: this is the fungus section, this is the Orgillion section, this is the wizards lab section, etc. Themed areas are great in a dungeon and I shouldn’t have to repeat myself again on why multiple entrances/exits are a good thing. I don’t know, it just doesn’t seem like the individual parts are a part of a whole. They clearly ARE, with some bleed over at the edges, but somehow I don’t get that impression. That could just be me? This … smallness? makes me think about the place as a small series of Lair Dungeons rather than as a whole … then again that’s what B2 was, Lair Dungeons, right? The wandering monster tables are just a list of Folio monsters that are found in that section of the dungeon or the nearby sections. It’s pretty bare bones and could use a little more work. Given the ‘this is how D&D could have been’ theme this would have been a good place to do a better job at presenting the wanderers. Giving them a purpose or guidelines on how to use them.

The encounters are … frustrating. A high percentage of them have things going on that are great. Another high percentage just have monster listings, boring descriptions, or a combination of the two. Appeals to a “but B2 …” line of reasoning will be ignored. Further, the ‘greed’ theme that is supposed to be going on doesn’t seem to apply anywhere other than a cursory fashion. “You can see gems on the far wall and 10 bugs in the room.” That’s the essence of the first ‘greed’ situation and meant to help inform on the others. This is pretty much the essence of older D&D: there’s a monster in the room and a treasure … what ya doing? If it’s a GREAT treasure and a POWERFUL monster then all the better … greed/xp motivates the players to think creatively. So … uh … how are these encounters different than those? I don’t think they are, for the most part [More on this topic in the treasure section.] There are goodies in the dungeon to play with. Machines that do things in the more dangerous sections. Different colored mushrooms to eat. Pools or water to get submerged in. Carvings and runes to read. At one point the party should be able to see a bridge over a chasm that has no obvious connection to where they are, strongly invoking Thracia hidden areas. This is all super great stuff and there’s a lot more of it. There are prisoners to free, slaves to revolt, and other things to take part in. There’s also a lot of boring old rooms that may have the addition of a boring monster description in it. “This room is dusty and has 3 Norkers.” or “This Sleeping Quarters has hay and straw in it and is messy and has 5 Norkers in it.” There’s a lot of this. A whole lot. I know that the mundane has to be there for the fantastic to have an impact but it feels like a bit much to me, although that could be personal taste. If the goal is an introductory/teaching module then I think some of the wrong lessons are being taught. There’s some save or die and some sections that I would probably give a hint or two about running … like the mushrooms or some of the wall carvings. The wall carvings are a great example. Some are worth looking at to get hints. Some are just flavor text. Some will do bad things to do. There’s generally no way to tell beforehand. I’m pretty sure the goal should be to reward interaction and examination. So while the goodies are present they could use a little more in the way of extra information to help run them. After all, the back and forth between a DM and player is what this kind of style is about. Maybe that’s meant to be implied but I got the impression this was supposed to be a ‘learning’ module. Anyway, there’s a lot of mundane detail that I was not happy with. This is, I think, the section that needs the most work. If I went through this a third time and worked out the hows and wherefores of the creatures in the dungeon and noted where they were on the map (for incursion response purposes) and did some work on adding some interesting detail then you’d have an REALLY excellent module. Something as good as Many Gates of the Gann, one of the classics and best of the new wave.

The monsters are Fiend Folio guys so you know they are good and unusual. They’ve been converted to BASIC style and are all included in the back. The treasures are likewise pretty good although there’s a strong Screw Job component to them. AKA: the greed theme being implemented. Who wants to take 330,000cp back to town?! Who wants to search the garbage room for 3000cp?! Who wants to remove the giant fossilized skull from wall for 10,000gp?! How about getting the ivory table out of the dungeon? Uh … The treasure is far between and massive when it comes up, all keeping with the greed theme. Of course, there’s a lot of monsters the characters are squishy and gold is the primary way to get XP … so the module is working against a core concept of the game. I like where it is going with its mundane treasure I’m just not sure it makes it there. The magic items are a disappointment in contrast. Just +1 swords and rings of blah and potions of boring book thing and so on. None of it is that interesting and thus more work needs to be done to make them, and the more portable mundane items, more interesting and exciting to the players. +1 swords are boring. AIDRU, SLAYER OF MEN is something to take note of.

I should mention also that there is an attempt at a new description style here. There’s no way I’m going to slam someone for trying something new so let’s consider this section more of an academic discussion and less review. The keyed encounters all have 3 columns. The first column has a sentence or so of a brief description. The second has a more in-depth description or details if the room is further examined. The third column has monster stats or perhaps a game effect. All of this is under a heading like “14: Sleeping Quarters.” I get what is trying to be accomplished here. Some combination of a replacement of read-aloud and “expanding depth” in descriptions along with keeping the game mechanics separated. I’m not sure it works. It limits the amount of encounters per page to five or six. It may also be the case that the format works but the examples all suck. 🙂 This gets back to the ‘boring description’ issue I mentioned up above. It’s not clear to me that this works better than a well-written traditional format (of which there are damn few.) I DO very much like having a room title in the number. That helps A LOT with orienting yourself to a room.

If you like making a dungeon your own then this is the product for you; it’s core is very solid. This is one of those products that I’m not sure of and need to think more about to come to a final conclusion on. They don’t happen often but when they do they usually have something interesting going on, just like this one does. Something Interesting Going On is enough to make my cut, especially when it’s free.

1 Response to The Caves of Cormakir the Conjurer