WGH5 – Lords of the Howling Hills 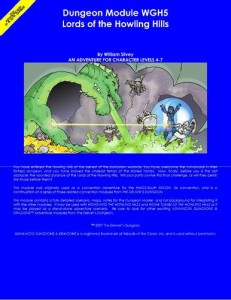 You have entered the Howling Hills at the behest of the barbarian warlords. You have overcome the humanoids in their fortress dungeon, and you have braved the undead terrors of the storied Tombs. Now, finally, before you is the last obstacle: the vaunted durance of the Lords of the Howling Hills. Will your party survive this final challenge, or will they perish like those before them?

This is a smallish two-level dungeoncrawl. The party is sent to kill a lieutenant of Iuz. It’s a pretty straight hack that will turn in to a pitched mass battle. There’s a book of infinite spells, a green dragon, and an 8th level wizard at the end. It’s the largest crawl in the series. It’s also the most combat heavy and the the most boring. It’s another ‘tournament module without a scoring system” design.

The party is finally nearing the end of their quest to save the cowardly Wolf Nomad barbarians. They are too busy/can’t handle things themselves and thus the party is sent to kill a lieutenant of Iuz, the titular Lord of the Howling Hills. In practice this means a two-level dungeon hack against a supposedly intelligent foe. That’s the first problem. The group is supposed to fighting the intelligent guards of a fortress but they don’t really act in a coordinated manner. It’s more like each room is its own little pocket dimension and everyone outside of it is unaware of what’s going on inside of it. There are a couple of throw-away statement in the (brief) introduction about the inhabitants reacting if they hear noises but that’s as far as it goes. It’s much more likely that “if they hear sounds they prepare for battle and await the intruders.” What kind of reaction is that? Everyone inside is supposedly well trained. The text says so. And yet a coordinated response if helping out the guys in the next room is mostly out of the question. An Order of Battle would have been a very welcome addition.

The two level maps are simple linear things with a couple of branches. There’s none of the complexity that would encourage exploration or creative play. This then is one of the major faults of the module. The ONLY way you can approach it is through a straight hack. Sneaking, disguising, etc, are not going to help because it’s just a straight up linear design. That’s quite disappointing. The dragons lair, on level two, has the standard “illusion covering a hole in the ceiling” design so the designer can put a dragon in the dungeon and not worry that room is 10×10. Lame. There are also these weird thick black lines on the map I never figured out. False walls maybe? I don’t know. The wandering monster chart for level one is just a collection of the ogrillions, kobolds, and orcs that make up the guards of the place. Level two is weird though … It’s got oozes, giant rate, centipedes, carrion crawlers and other vermin, as well as two guard patrols. What’s up with that? It doesn’t seem to make any sense.

The encounters are a combination of combats and traps in text that is WAY too long. Two lengthy paragraphs per room, in addition to the read-aloud paragraph, is pretty common. This is way too much detail. “They weapons they are most likely to grab are broadswords and short-swords at he DM’s discretion.” Uh … .thanks. They rooms make frequent mention of “authorization” but no examples are given that would allow a more creative play style. It’s just enter room, be bored by read-aloud, hunt for the room contexts in the text, enter combat, next room. The details offered in the rooms don’t add anything to the encounters. Telling me that the creatures will grab short-swords or broadswords does nothing. I can easily do that, or better. I’m looking for some spark of creativity, something interesting going on in the room, to liven things up for the players. I don’t need yet another collection of rooms with monsters in them. I need some inspiration seeds that is going to delight my players and excite me to run it. There are some weaponsmiths who use the still-hot weapons on the players and that’s about a close as this module gets to something interesting. Oh wait, you say you LIKE an endless amount of rooms full of 3HD orcs and kobolds to slay? Then have I got the adventure for you!

You know the drill. No new monsters to freak the players out. Just work-a-day hacking of older stuff. And not even interesting older stuff. Book magic items. Boring coins, gems and jewelry that are uninspired and have no detail. It’s like the module is just going through the motions.

These kinds of adventures make me bitter and angry. As if I was betrayed by the one I love. Fuck you AD&D! Sleeping around with rules lawyers and uninspired dreck! We had such a good thing going in 0E but oh, no, you had to have more! You had to have a regimented play style. Yeah?! You want your regimented style?! Well it leads to 2e bitch! Screw it, I’m going to go sleep with your mom, BASIC.

1 Response to WGH5 – Lords of the Howling Hills