WGH4 – Tombs of the Howling Hills 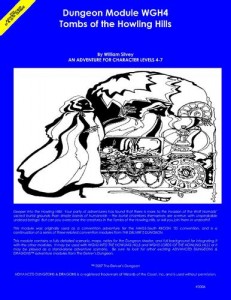 Deeper into the Howling Hills! Your party of adventurers has found that there is more to the invasion of the Wolf Nomads’ sacred burial grounds than simple bands of humanoids – the burial chambers themselves are overrun with unspeakable undead beings! But can you overcome the creatures in the Tombs of the Howling Hills, or will you join them in undeath?

This is a small dungeoncrawl in a small tomb complex that is also occupied by an Evil High Priest. Undead and Black Orcs abound, as well as a bit of vermin and quite a few traps. The map errors are very frustrating. There’s an interesting bit or two but nothing really to distinguish it.

The cowardly Wolf Nomads, the guys who have kept Iuz at bay all these years, are too wimpy to protect their own hallowed dead. The party gets sent in to clean ’em out. On the plus side this description, errr … a slightly different take on it, is presented in only half a column of text before the adventure jumps right in to the meat. Yeah! I LOATHE long and drawn out introductions. It could be tighter still, and while clearly a mostly-linear tournament module it has no scoring system and so it’s on on to the hack! Although … for all the text there’s no real mention of what the goal is. Clean it out? Looking for clues? No idea. Not an issue for a free-standing module but I don’t see how it could serve as a tournament module with some kind of goal?

The map for the tomb is one of the most confusing things I’ve ever seen. No, let me correct that. The map and the descriptions of the rooms don’t seem to go together at all, which makes the entire thing confusing. This begins at the very first room. There’s read-aloud text that describes a room. The floor sags in the middle at the far apex lies a metal container. There’s a skeleton slumped in a niche with some vessels. If you come within 60′ of the skeleton it does something. So far so good, right? The read-aloud describes an obvious trap and if triggered the middle 20×30 section of the floor collapses in to a chasm below. Ok, no problem. Oh, and the room is 10×10 on the map. WTF!?!?! It makes non sense at all. Room two is described in the text as a Meeting Room with stout wooden doors on either end and chairs, crates barrels, etc in the room. That’s CLEARLY no the room on the map, with one door, an alter, and some weird fire symbols on the map. There’s a collapsed corridor that doesn’t look collapsed. There’s a room full of pillars with throned undead people in between each one. They rise from their six thrones to attack … but there are eight according to the map. The last room is some kind of chasm that’s nigh impassable. Not really an issue except when you factor in the first room has that skeleton that kills any evil creature that passes through. That means there’s no way in or out of the tomb complex for the people that live there. Pits and platforms are described that don’t seem to appear anywhere on the map, in spite of the map rooms having a lot of internal detail like columns, pentagrams, alters, and so on. I can’t figure it out. There’s no wandering monster chart.

The encounters are pretty standard. Undead in tombs bursting forth, and orcs guarding rooms, etc. A couple stand out as being more interesting. That very first room, for example. It has a haunt which possesses a character until they find the dead skeletons holy symbol and return it to their body. That’s kind of a nifty little thing to give a player a little more freedom and/or a change of pace for the evening. A little mini-quest with an (obvious) short duration and not a longer-term screw job. I’m a sucker for the classics and the dungeon has a good one: a pile of stuff around a corner with Magic Aura cast on it … and a blade trap for those going around the corner. That whole ‘bodies on thrones rising to attack’ is a nice little thing also; like I said I’m a sucker for some classic elements. Those are standouts because they differ from the usual “bodies rise and attack” routine that is otherwise present in the dungeon. The EHP, Zarkon, gets no build up and so he’s just another raving cleric summoning a demon when the party runs in to him. That’s too bad; a little more work to rearrange things and some hints of his presence could have been dropped and tension built up for the Big Bad. There’s also a really bizarre encounter at the end with a group of escaped slave: wererats and kobolds, who each want to kill the other. There are 8 3HD wererats and 5 1/2HD kobolds. And the rats can summon a nearby rat horde to help. But they are afraid of the kobolds because they have silvered their weapons. Uh … Like I said, a lot of the module just doesn’t make sense.

There’s no real coinage/gems/jewelry to speak of, which is fine in a tourny module but not really acceptable in a game system that requires coins to advance. The magic items are all book items. That’s quite disappointing. How much effort does it really take to give some flavor text to a book item? It adds so much.