Challenge of the Frog Idol 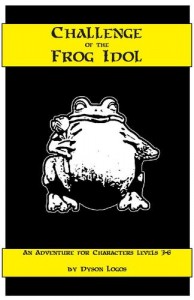 The Frog Idol has stood in the Black Mire for ages untold – an idol of an ancient and forgotten god who now only manifests through this ancient rock in a forgotten place. However, with the conquest of the dwarven citadel of Kuln by the giants, adventurers have been seen again in the city of Coruvon. And from Coruvon, the Black Mire is always in sight.
This is a hex crawl in a swamp. It’s terse and is PACKED with enough flavor for any DM to work with. It would be well worth having even if it were not free. This is mostly a great example of what an RPG adventure should contain What Logos has done in this module is amazing. He tosses out history, background, and flavor as if it’s second nature. It’s not presented as a mass of text that hits you in the face but rather it’s all integrated in to the adventure, mentioned in passing, which causes your mind to race and has you screaming “I WANT TO KNOW MORE!!!” That, my Swedish friends, is good content.

The introductory text is minimal and the largest portion of it is quoted above as the publishers blurb. Read it again. Frog idols? Ancient and forgotten gods? Conquest of a dwarven citadel by giants?! That background text brings the noise and it does it in only three sentences. There’s not much more to the introduction. “The party arrives in Coruvon. Each member gets to roll once on each of the following three rumor tables.” Uh … TIGHT. The rumor tables deal with the city, the fortress of Kuln, and the Black Mire Swamp. The city is where the players swamp, the swamp is the focus of this adventure, and Kuln is, in this adventure, the parties ultimate objective. The module is 23 pages pages and the city gets a good three pages of description. Single column large font description, so it’s overly long. What’s interesting are what’s been chosen to be described. What’s been chosen to be described are the INTERESTING things about the city. There a section on the racial makeup of the inhabitants which might as well come from any product … except it mentions “…only a scattering of dwarves who live in quiet shame that they are not either trying to re- claim Kuln or were slain defending it.” BAM! That tells the DM a lot and gives me loads to work with. How about the small economy section? “As such, just about everything except for fish, prostitutes and cheap beer and wine commands a higher price here than elsewhere.” Exactly what I need to know to run the city. And those are not even the good examples! There’s a section on the Arena, the garrison troops, and the Red Lantern district that are REALLY interesting. This one sections of the adventure exemplifies what makes this a good product. It’s terse and vivid. As a DM my imagination races. Why? What’s up with that? Who is he? I can fill ALL of that in on my own on the fly, I just needed a push. The designer gives you a rocket-assisted shove. I’m seriously impressed.

The party picks up the hook in town. They are contacted by the Oracle and asked to seek out her husband, the Frog Idol. He knows how to get past the giants in Kuln. The group will journey through the swamp to find the idol, do a fetch quest for it, and then get an amulet. Pretty standard shit. Remember that “terse and vivid” thing I commented on earlier? That’s what sets this apart. The oracle is a pure white woman, a living Alabaster Statue, served by hunch-backed lizard-men messengers who was once the bride of the Frog God. Uh … that’s something you don’t see every day. Mr Frog God/Idol wants some old tokens from his marriage: a rose and a basket of amber. Hmmm, ok. There’s a giant island made of corpses in the swamp that’s rules over by the Zombie Master who’s dungeon inside is made of bodies which continually grab and reach for people walking through it. Uh … There’s a tribe of trogs that is describe more as being degenerate humans than reptilemen. Pretty good imagery there even measured upon the standards of this module alone. Even the McGuffins are cool. A GIANT iron rose, 10 feet tall. HUGE chunks of amber. The basket is the size of a boat. When it’s good this module is among the best ever.

And when it’s bad it’s typical module D&D nonsense. It’s a hex crawl with 6 mile hexes, about 18 by 18 hexes. The wandering monsters are just a table with some generic swamp creatures on them. The magic items are all book items: +1 shield, potion of healing, etc. There is a single exception and that one item is nice: A potion of mage blood that you throw like oil and gives targets a -2 to their saves against the next spell cast them. Good Item. The amount of mundane treasure seems a bit light considering the level range and just isn’t interesting at all:”silver necklace set with sapphires.” There’s a tacked on section at the end that details an old dwarven guardpost on the road to Kuln. It adds nothing to the adventure, is boring, and feels tacked on at the last minute.

One of the very nice things about this adventure is that you can drop in anywhere. Your group needs to go [insert place] and are worried about it? Well then, how about a statue contacts them and sends them to a frog idol who will help them if they help him? It’s PERFECT for just dropping in on the fly. Get it?!?! Get It?!?! Fly?!?!? Frog God/Idol?!?! Fly??!

It’s free. Go download it. Bask in its glory.

5 Responses to Challenge of the Frog Idol