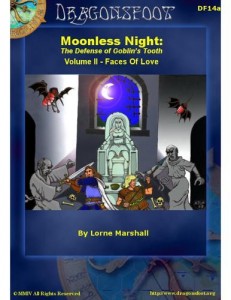 This is a railroad tavern murder mystery that ends the way these things usually do: with the villain hiding out in the dungeon. This time it’s a doppleganger behind things. There’s tons and tons and tons of backstory and read-aloud. There’s very little monetary wealth and therefore XP. It does a couple of things right, so I’m going to cover that first so you don’t have to read the rest.

First, there’s a magic sword in the adventure that the players can find. It’s a good item. Multiple bonuses, speaks, has extra powers, gets a decent physical description (albeit in a different location), has some local mythology surrounding it, nice flavor text ability on the sword (it’s a goblin-slayer and ‘salivates’ when used against goblins, shedding droplets of water that fizzle loudly in to stem. Cool!) It’s a REALLY good write up of magic sword and is EXACTLY the kind of shit that drives players wild when they find it. Power Fantasy, Ho! I’d prefer it if it also had some kind of drawback, but I’m not going to bitch too much. It’s one of the best magic items I’ve ever seen written up. This is the kind of thing that excites players and makes them giddy.

Second nice thing: The sword is hidden in the dungeon WITH A CLUE TO WHERE IT IS. It’s hidden somewhere that is pretty obvious, once the players figure it out. That’s kind of cool. “Oh! THAT’S why that thing is special. Duh!” The clue is the good part though. Not the exact clue used but rather the fact that there IS a clue. Something the players find gives a hint that there is something hidden in a part of the dungeon the players have already hidden. That’s the kind of stuff I like. The place is not just a collection of rooms but has a kind of … mechanic? to it. One room impacts another. You have to backtrack. THings in one area lead to the discovery of things in a a different one. It only happens once in this adventure but it IS a nice impact.

Third nice thing: There’s a brief couple of bullet paragraphs on conducting a barroom brawl. Mugs of ale, punching, benches, buckets of scum, and mutton legs are all covered. All of the classics. Nice!

That’s it for the parts I liked. This thing is, otherwise, a 2E abomination.

Two pages of DM backstory that explains the emotional state and background of the doppleganger. Half a page of read-aloud to describe a tavern brawl starting. Half a page of text that describes the need for the DM to railroad the party and presents a variety of solutions to that age-old demon of all plot bullcrappery: the pesky ‘Party Free Will’ problem. The brawl is a pretext to get two NPC’s to appear to hate each other and have them both get out of the tavern so one can die in a field a few moments later. This sets the second one up as the murderer, since he’s got no alibi. The doppleganger is counting on the patsy to get hanged for the crime so he can woo the barmaid that he thinks he’s in love with. Of course, he could have just killed the other suitor outright but then there would be no plot.

So dude 1 that snuck out turns up dead and witnesses saw dude 2 kill him. They go through a whole ‘verified by magically lie detection’ shit THAT I ABHORE. This is the ‘magical society’ 2E view of D&D village life and I hate it. I hate the way it tries to explain things. I hate the way it tries to set things up. I hate it when magic is commonplace in society. It devalues magic. That should be the realm of the party and vile sorcerers. The magical lie detection reveals everyone is telling the truth: the witnesses did see dude 2 and dude 2 is telling the truth when he says he didn’t kill the guy. Oops. Sherlock Holmes time for the party; they get to question everyone. Too many pages later the DM is just encouraged to tell the party “No one has mentioned Myathas. That’s unusual. Maybe you should go investigate his home.” That has to be in there because the whole thing is so convoluted that even Poirot couldn’t follow it. They go to the guys house. Ohs Nos! It’s guarded by the town guard! And they won’t let the party in! The party goes back to town to complain to the Reeve, only to see most of the guard come back for the night. Yeah! They can now to back to the house! Only to find 2 militia guys there guarding, who defer totally to the PCs. IE: there had to be a way to telegraph that the guard captain was evil/obstructing, even though that is completely meaningless to the adventure.

Hey, you know how a bunch of older editions had henchmen & hirelings in them? And you know how it was pretty much a staple of survival to hire a bunch and take them with you to the dungeon/adventure? Well, the designer thinks that sucks. He thinks you should be a hero. Heroes don’t treat the two henchmen the party just received like the henchmen they are. Heroes don’t make them accompany the party. Heroes don’t send them in to the home first. Oh, and if the party does then the DM is directed to have the monsters inside NOT attack the guardsmen but rather direct the kobold attacks on the party. WHAT. THE. FUCK.

Inside the party finds a DIARY! Yes, that old staple of crappy design makes an appearance here. And while fucking around the house the doppleganger has kidnapped the bar maid and taken her to his dungeon lair. A dungeon lair with such a bad reputation that none of the guardsmen, militia, or baronial guard in town will pursue. What evs. The room descriptions for the farm range from half a page to a page each. More lengthy read aloud. A wilderness travel adventure to the dungeon in which the DM is encouraged to go easy on the party so they arrive at the dungeon at nearly full strength, etc. The dungeon is full of read-aloud and lengthy DM description, maybe 3 rooms to the page on average. They don’t really have anything interesting going on. The second level has some ‘Tuckers Kobolds’ action before the battle with the doppleganger.

The party receives a grand total of about 300cp from completing this adventure. Good luck leveling.