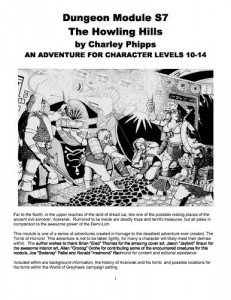 Far to the North, in the upper reaches of the land of dread Iuz, lies one of the possible resting places of the ancient evil sorcerer, Acererak. Rumored to lie inside are deadly traps and terrific treasures, but all pales in comparison to the awesome power of the Demi-Lich.

This is a short 11-page module that channels the Tomb of Horrors. It is just about as close to the Tomb as you can get. Sequel. Preqel. Whatever … it’s another Tomb and it’s related to the first since it Acererak designed it to be a false tomb. 21 rooms, linear layout. Demons summoned if you go astral/ethereal, false doors, mosaics on the floors, ceilings, two false entrances and a real one. It’s all here. If you want to play the Tomb of Horrors 2 then this is the module for you. I hate Tomb of Horrors. I recognize it for what it is and the role it plays but FAR too many people think that the thing is the ‘right’ way to design and run an adventure.

Given a page of maps, an intro page, a new monsters page and 1.5 pages of background, this thing is pretty terse even though all of the rooms are essentially complicated set pieces, just as with the original. The journey to the tomb and background are about as detailed as the Gygax version. What is different, or perhaps what I don’t remember, is the wandering monster table for encounters on the way to the tomb location. This chat is NOT messing around. 30-120 orcs. 1-10 hill giants. 20-80 gnolls. Patrols of 150 soldiers. That’s some bad ass encounter tables right there. Several of the encounters are expanded upon briefly, which is I prefer to just a single line entry on a table. The context helps me run it better.

I’m not sure what else to say about this. It’s the Tomb of Horrors. There are some mechanisms I don’t agree with. Pits with a 100% chance you fall in. One monster, undead, has an amulet that does the whole “-6 levels to turning” thing. I hate that. Just bump his level or make him a Vampyr or Vampire Lord, or Demon Lord or something. But don’t just throw in a stupid gimp for the players. Likewise, perhaps the tomb should be extra-dimensional instead of just declaring you can’t tunnel in to it with spells? I don’t know, that seems lame also. Otherwise the encounters and layout and rooms channel the spirit of the Tomb perfectly. “A light mist of acid dissolves your gear” but you don’t notice it until it’s too late. A page long backstory of an NPC that leads to some other hook for further adventure.

It’s the Tomb. Do you like the Tomb? Do you want an adventure like the Tomb? Would you like to expand on the Tomb? Then this is for you. Just please, dear lord, do the D&D world a favor and never tell anyone you think the Tomb is good. It has a purpose but that purpose is limited.