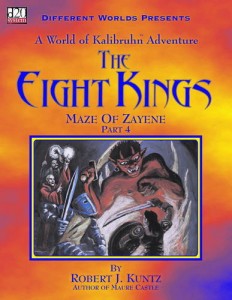 THE EIGHT KINGS have fooled the people of Ersille. Not only did King Ovar rule, he ruled eight times over (give or take a court wizard), created anew each day by the Wizard Zayene. he was a complacent king, but set upon evil ways, for his (or was it their?) minds were controlled. you see, the real King Ovar was taken prisoner by Zayene some time ago. And now, instead of wanting Ovar dead, the good people of the Kingdom want the old codger saved! What’s a regent to do?

This is a huge mess of a 3e module. Long stat blocks and mountains of descriptive text conceal one of the best wizard labs ever created. The place is chocked full of weird stuff and big red buttons all begging for the PCs to play with them. It’s like Tower of the Stargazer taken to 11 … if you can wade through the padded descriptions. At it’s heart it’s an exploration of a wizards laboratory while trying to track him down and kill him.

The map and keying for this is quite unusual. While there might only be 14 rooms there are at least 42 keyed locations and many of those are broken down in a, b, c, d, etc … entries. This means that most rooms have multiple keyed entries in them, each of which usually represents some interesting thing that the party can interact with. The map proper is just a linear little thing with a branching offshoot every now and then. It’s not really capable of supporting exploitive dungeon play as that term is usually used. The monsters don’t wander and anything the party releases doesn’t really get a choice in chasing someone down. Instead the exploration elements come from the interactions with the various things in the rooms, of which there are MANY.

The various chambers are full of different things to interact with. A model of the solar system. Pools of liquids. Crystals to shatter and play with. Curtains to look behind and walk through. A wall of skulls … the list is long and impressive … but not nearly as long as the MASSIVE amounts of text required to explain the various elements. For example one room has an alter whop’s description is one keyed entry and takes up a page. Then there are five pits in the ground, each with it’s own specialness, which describing takes up about a page and a quarter. The same room has two curtains in it which take up abut two and a half pages. Then there’s The Curtain of Eyes which takes up a column of text and another alter which takes up a half page. This is a pretty good example of a decent encounter room in this module. There is A LOT going on in the room and a whole lot to interact with. Some of it will help you and some it will harm you. Some of it works with other elements in the room and other elements in the dungeon while others don’t And it’s all got a certain style to it … this kind of weird magic thing that one seldom sees outside of a Lamentations product. Most of the devices and encounters would be very much at home in a LotFP product, especially one of the lighter products like Stargazer. Almost all of the creature encounters have the PCs doing something to trigger the monster. ‘Releasing the demon/devil’ is a frequent possibility in this one.

There’s a decent assortment of unusual creatures and items to discover as well. Drops of lava to grant abilities and a few new interesting monster types that fit in well with the wizards lab motif. The module is dense and the path forward somewhat straightforward but with each chamber being FULL of things to interact with. It’s a decent high level module and that’s a very rare thing, but it has FAR too many words. The the mage-in-residence was a recurring villain in a weird magic kind of OD&D campaign then this would be a great place to explore near the end. Either before finding him, or with this being the last battle-ground, or as an encounter after the party finishes him off and is cleaning up his various labs.