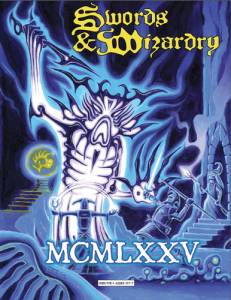 This is a wilderness adventure, following a treasure map. It’s very tough, as wilderness adventures are wont to be. It is treasure poor, very deadly, and might be considered a teaching module because of the encounter descriptions. You might imagine that someone recorded a hex crawl journey and then made a D&D adventure from it, in spirit anyway. It has many charming parts.

Ok, let’s get this out of the way. I’ll say again: I think this adventure is charming. Some people are going to think it’s boring. I think those people drive mini-vans because they are practical, have lost the will to live, and don’t know what joy is. Joy is the very first time you ever met a weird monster in D&D. You didn’t know what it did. It was menacing. You were scared of it. You say the gleaming pile of treasure. Joy is fields of flowers and fairy dragons. This adventure is a flower field full of fairy dragons. You can look at it as just a list of common encounters with too much description, but then you would be a member of the Technocracy.

This is a pretty simple adventure. The players are just following a trail on a treasure map, having pre-prorgammed and random wilderness encounters along the way. It’s fairly linear in that respect; there’s not really a wilderness hex map to explore. In fact, there’s not really a map at all. The GM map is more of a diagram with no scale on it. While the designer points out how many miles a day one can travel it has no bearing on the adventure since the ‘map’ has no scale.

The wandering wilderness encounters are very detailed and vary quite a bit: Environment effects, strange goings-on, and monsters encounters. The text that describes these has a decent amount of verbosity, to the extent that 36 wandering encounters take up three pages of text. This isn’t exactly pay-per-word 3e-era bloat but rather a kind of authors voice coming through. You get a pretty good sense through this text of how the designer runs his own D&D games. This same sort of descriptive text is used in the pre-programmed encounters as well. I think they, far from being boring and samey, have a certain degree of charm to them that’s communicated through the text length. And let’s be clear, 12 encounter descriptions per page isn’t exactly a Dostoyevsky level of detail. The text does a decent job in communicating what it intends: this is the how we played the encounters in 1975. Why the fuck do I sound like I’m defending this module? I’m on the defensive for some reason and now idea why. Anyway, I think it does a good job given that the purpose of the module is to communicate to newer players how things were played in an earlier time.

I like the encounters. There’s a giant rat sitting on a log that begs shiny objects from the characters and trades shiny objects from its collection. There’s a giant beaver in a dam that can be friendly. There’s a nest in twisty tree roots near a river that has a fairy. Give it liquor and offerings to make friends or capture it and force the location of its pot of gold! That one encounter does a decent job of describing both the charm of the module and why I like fey. It’s on the longish side for this adventure, coming in at just under 1/4 of a page. In that text the designer does a great job of communicating the flavor of the encounter. A kind of rats nest is described as being contained high up in some tree roots, with fishing hooks and the like in it. The whole things is described wonderfully, much more so than I can summarize, and give you an instant feel for what the place looks like. This evocative, and brief, description allows me as the DM to expand the encounter description as I need to since Bill was able to so completely communicate the flavor of the place, without droning on. The creature , a leprechaun, is briefly described as well, at least his personality. It’s classic fairy leprechaun: likes offerings, like to drink, pot of gold, helps or hinders the party depending on how they treat him, and most probably is completely ignored by the players since he remains invisible. Well, unless the party leaves a lot of booze in which case he gets drunk and becomes visible. This is a CLASSIC fairy leprechaun. The players will recognize it and come up with all sorts of plots to get his plot of gold, or be kind to him, all drawing from the tales and memories of their youth. THIS. That’s it. That’s D&D. You get to experience the wonder and glee of whimsical encounters. It’s not a monster. It’s just a thing living out by the river trying to catch some fish who likes his booze a little too much. And the players know that .Not because they’ve read the fucking monster manual, but because that’s what EVERYONE knows about leprechauns. That’s what the encounters in this module are. They communicate the very first time you played D&D. Not everything is out to get you, not even the ogre who’s cave you break in to. There are weird things to marvel at, like strange obelisks and parts of giant broken statues.

WIlderness adventures can be tough. The standard wandering tables in the old DMG had you meeting hydras in the wilderness. It didn’t care what level you were. The designer claims that this adventure may be a push over for characters over first level. Bill Webb is fucking crazy. This adventure will kill MUCH higher level characters. There’s a 6 HD dragon. And a Vrock. And the kobolds are CLEARLY of the ‘Tucker’ variety. The party is going to have to be ON. THEIR. TOES. or they are gonna DIE. The treasure here is good, though sparse. The coinage is sparse and a lot of the treasure is mostly ‘other’ goods. A fine cloak. A crystal decanter. A nice broach or cup, that sort of thing. There’s a decent amount of it, all low value. The party had better have brought a cart; they are gonna look like Sanford & Son by the end of the adventure. There’s a decent amount of scroll treasure that I think is well done. A torn up magical scroll you can put back together, A cluster of scrolls all having the same spell, and so on. It seems real. There’s a couple of other magical items as well that are non-standard and wonderful. This is a tough-ass adventure for XP though. Bill describes an alternate XP system that provides even LESS xp than the minimal amounts S&W gives you. Combined with the low treasure totals, even at the X marking the spot, the players are gonna have rough time in the XP department.

Danger, Wil Robinson! Bryce Pet Peeve Ahead! The worst part of the adventure is the introduction, which is a kind of three page designers notes. It’s meant to be a description of how they played in 1975. It’s interesting to read and does a decent job communicating that style of play. He also comes off as a die-hard grog who is talking down to newer players. It’s ok to like a certain style of play and to prefer it. It’s less cool to condescend. A lot less cool. Bill comes off as just another quaint old geezer who everyone puts up; kind of like your un-PC older relatives at a family reunion. That’s too bad. I’d like to think it isn’t on purpose but I see a lot of this sort of behavior online and it drives me nuts. Old dude is Old and is using it to justify his condescending behavior. Maybe this is why I am on the defensive on this module? Idk.