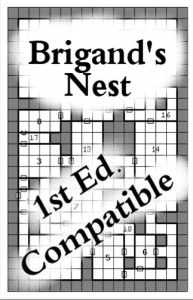 The village of Ragentop (population 405) has become the subject of a series of raids by Brigand’s who descend from the nearby hills. They have raised a bounty to pay the brave souls who rid them of this menace.

This is a 1-page adventure that folds up to fit in your shirt/back pocket. It also costs $.99. It’s not worth it. While it shows promise in a couple of areas it comes off as Just Another Boring Adventure. It also suffers from Generic map Syndrome. It’s too bad; the concept of one-page dungeons is a good one and there are hints of good things in this dungeon … but just hints.

The background flavor is actually kind of neato. There’s a village and it gets raided by bandits. The self-styled king of the village has organized a defense force and had a palisade built The villagers flee in to a palisade that they constructed but the bandits then raid and pillage their farms. The king has taxed everyone till he’s raised 1000 gp in order to hire some people to clean out the bandits. Enter our murder-hobos. That intro is done in just a small number of sentences and creates a GREAT vibe to run the adventure. It creates a nice flavorful set up that a DM can run with and expand to fill in as needed. That’s the kind of intro I like and the kind of detail I like: just enough to get my own imagination going. Unfortunately this all ends right at the entrance of the dungeon. The walls are rough hewn sandstone. The doors are all mismatched, coming from a variety of sources. The door in is a rough and sheavy one set in to a hill side … That’s all GREAT. And that’s also where the interesting bits stop. It’s a terrific start though, ad the one-page format enforces the terseness that I prefer.

What follows are eighteen rooms that must have been written by someone else. The room descriptions are all boring as hell. A small kitchen is described. Nothing special about the description, or particularly evocative. The leaders room has the leader in it, along with a locked chest and an old desk with a barrel chair. The treasure room has two chests with gold and silver in them and some wall hangings. The entire dungeon is sooo different from those short intro pieces. It seems like it’s trying sometimes: water drips from the ceiling in one room and in the treasure room there are wall hangings. There’s a lab with various scrolls and flasks littering the place. It’s like there’s an attempt in each room to add some flavor to get the DM going but it’s all so … bland. It’s like some kind of formula was followed. “Each room must have one thing to anchor it.” That’s great in concept but in execution it didn’t turn out so well. The anchors for each room need more work.

The map is a poorly laid out thing that looks like it was randomly generated: various rooms densely packed and connected with hallways. It gives the appearance of being an old school map but it doesn’t convey any of the charm. And  I don’t mean that hand-drawn charm stuff, I mean the whole thing looks more than little generic and boring and computer generated. All of the rooms look square. The layout is uninteresting. The hallway placement is … strange, and not in a good way. These show up now and then and I wish I knew how these were generated or what to call them. Actually, you can get a good idea of the layout from the cover picture attached. It’s just … bland.

The core idea of a one-pager is a good one. It enforces a terseness and the yearly contests have proven popular. The background is not bad at all either. But the core adventuring concept at play, bandits in a hillside, just isn’t that exciting. The whole thing feels like drudgery. Like the adventurers are just putting in another day at the office. I like more interesting things going on in my adventures … even if I DO prefer humans to humanoids.
This is available on DriveThru.