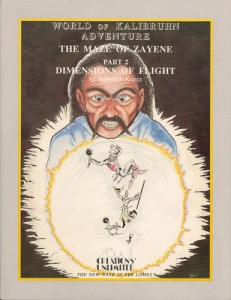 The assassins have become the pursued and the intended victim is now the victimizer. The characters have failed to assassinate King Ovar. They now flee for their lives, for four keys, for their only future in the world of the sane. Through desert climes, up mountain peaks not of the world, to a land with blue and black snow, and onto a not so happy Happy Hunting Grounds — they flee, and fight!

This is part two of the Maze of Zayene series. In part one the characters tried to kill the king and were transported to the court wizards strange and wacky dungeon maze. They were faced with a door that needed four keys and must travel to four different pocket dimensions to get the keys. Let the fetch quests begin!

Three of the four pocket dimensions are very similar in feel. The party must travel through four hexes along a linear path, experiencing three encounters along the way before reaching the main encounter. The main encounter will have a small and simple dungeon attached to it. The party will get the key in the dungeon and then move on to the next pocket dimension. Two of the areas start out with a mass combat. Fifty orcs, four ogres and two stone giants or one hundred nomads. The outdoor encounters are generally nothing special although they do tend to be a bit better than the throwaway encounters found in many of the newer products. But that’s not saying much.

The mini-dungeons are a different matter. They around thirteen encounter areas each but this is a little misleading since many have sub-areas or other features, such as lots and lots of statues. Statues with terrified looks, weird witches, and bizarre experiments are the specials here. There’s a nice library encounter with the required “lots of books that each do something different” thing that Kuntz likes to put in and that I like to see in modules. I love putting the big red button in front of players and I love the idiosyncratic rules that tend to be encountered in these situations. The worst of these mini-dungeons is the last, which doesn’t really have a dungeon attached anyway. Basically the characters encounter a powerful entity who tells them they each get a boon. They need to not do this and ask for the key otherwise they are doomed to be stranded in this ice realm forever. That seems more than a little dickish to me. Essentially two of these three places are just throw-aways while the middle one, Baal’s Realm, offers quite a bit of interesting encounters.

The last of the pocket realms is also interesting, although in a different way. The party end up in the Happy Hunting Grounds and quickly find a small village/inn. The guests are jolly but standoffish. During the night the party are warned that THEY will be the prey during tomorrows hunt! This should lead in to a kind of chase through this dimension with the party fleeing and the hunting group following. There are several encounters, a friendly werebear, demonic stags, evil knights out of Monty Python, and finally a demonic fox who has the key. Only … he wants to trade for it. The mage’s sight, the fighter’s sword arm, the paladin’s right leg or the priest’s tongue. Refuse? Then no key for you … forever! Again, quite a dickish thing to do to the party especially since they are in the middle of a module series with no real opportunities for extended rests. I hear tell that wishes flow freely in some games and are saved up for events like this … but it still seems like a shitty thing to do to the party. Letting the party get in to a bad situation by themselves that they have to Wish the consequences away seems quite a bit different than purposefully putting them in a situation meant to drain a Wish. The chase scene is also a little uninspired. There could have been some mini-mechanics presented or some additional ideas on how to run the chase/hunt. As written it’s pretty uninspiring.

The best parts of this module are a couple of the mini-dungeons. I suspect that’s the designers strong suit. While the Happy Hunting Ground has potential it turns out that the main event is less than inspiring. The linear wilderness encounters in three of the dimensions and the dickish DM moves in two of them leave a pretty bad taste in my mouth.