Prisoners of the Maze 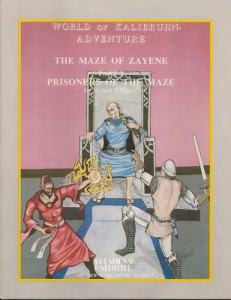 Four characters are a number complete — complete with a mission so insane, so daring, that terming it an assassination hardly satisfies the imagination. Are the four volunteers who would lay low King Ovar assassins? Or are they heroes? If they are the former, how are they better than the madman they are assigned to kill? And if they are the latter, will their heroism be enough to overcome the trials of…

When Goodman says something has a first-edition feel I tend to think of modules like this one. A silly set up and a mix of combat and puzzles in an environment that makes little sense. This module delivers that old school feel, which is not surprising since it’s written by Kuntz and was published in 1987.

The party is sent to kill the king and just as they are about to do so they are teleported to the kings prison maze/dungeon. Thus they don’t have their usual assortment of exploring goodies but are armed and ready for trouble n the funhouse before them. Funhouse? Well, mostly a funhouse. It’s hard to justify the existence of anything else in the dungeon unless you call it a funhouse and the hook/introduction is a pretty standard ‘stuck in the funhouse’ type hook. These are fairly common in tournament stye adventures and have a long tradition. Of course, this module is part one of four and thus is NOT a tournament module …

The map for this thing is … well I don’t know what it is. At first glance it looks like one of those authentic old school maps where every square inch of the paper is covered in rooms and corridors. The mere glimpse of one of those things, after days and days and days of the sparse maps/linear maps in newer products, can send ones heart all aflutter. Looking more closely though the map is not all that great. It’s a fairly linear affair with a couple of branching corridors … until you factor in the secret doors. There must be 15 or so of them. Some are at dead ends and others are just spaced in a random wall section in a corridor. An experienced group of old school players should be ready for the doors and get some decent enjoyment out of it. The wanderers are a motley bunch: xorns, beholders, grells, gorgons, giant rat hordes, red slime, 4-40 gnolls, bubbles, red slime a couple of NPC’s and a friendly ghost! In all there are about 14 different encounters to be had with at least 2-4 of them having some good role-play elements to them.

The encounters are a combination of puzzles and set-piece combats. Lots of levers to pull, lots of statues to interact with, lots of freaky stuff to play with and lots of hidden goodies. The spikes at the bottom of a pit trap can be used to open a secret door … or searched to find one hollow with hidden loot. There’s an entire art gallery room with a CRAP LOAD of pictures, like 39, to interact with and a number of sculptures beyond that. It’s a trap! Run away! Or, go ahead and push the big red shiny shiny button … there’s lots of them to push … go ahead. Push One. What could it hurt? Bet you’ll get some loot … And in fact you CAN get some loot, and some decent stuff at that. Or you can die in fire and and summoned creatures … exactly the way these sorts of things are supposed to work! The creature encounters involve caged animal keeps who release their wards, a bas relief full of different types of oozes and jellies, animating statues, (Duh!), animated stuffed monsters, a doppleganger in a mirror, and a mock jury trial with skeletons, wraiths, death knights and an insane judge. In other words, none of this shit makes any sense at all while at the same time being wonderfully old school. This is all supplemented by a decent variety of new creatures and new magic items, both of which Kuntz has a talent for. The price paid for all this is more than a little extra text for each room description. It’s not uncommon for each room to take up at least a third of a page if not more.

This adventure is not crap; it’s full of interesting and inventive ideas. I just have absolutely no idea how to run this thing outside of a tournament environment. The ‘Mad Kings Maze’ thing combined with a mock jury and hidden treasures, etc, make this a real hard adventure module to rationalize in to a game world.

1 Response to Prisoners of the Maze