A Challenge of Arm’s 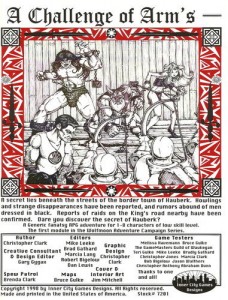 Abandoned gold lies outside a bordertown at the entrance to a peninsula known only as the Finger of Death. Strange forces are at work within the town, and the true power lies not with the guardian militia posted there. A strange smugglers guild known as the Hand serves a one-armed man with no name. Will you answer his challenge?

I picked this up at the 5 buck chuck booth at GenCon. The cover spoke to me. “Old”, “Idiosyncratic” “Chris Clark”. I recognized Clarks name as one of the guys in Eldritch Ent and I had played a game he GM’d at GaryCon this year. Face paced DM with the capability to handle a LARGE group. I picked on Matt Finch by locating one of his early works, The Goblin Fair, so I thought this early work by Chris should be fair game also. Only today, after looking the thing a few gazillion times, did I finally notice that Gygax was involved in the module also. My version has him listed as a creative consultant and design editor although an earlier version has “Developed with the assistance of GARY GYGAX” boldly listed on the front cover so it stands out. Hang on, gotta take my hypertension medicine. Yeah, I know, I just started it like four days ago. I can’t believe it. As if Krystal, Beluga, cigars and slovenly lifestyle could do it to you. Or maybe it’s the reviews? Nah, it’s probably all the BULLSHIT at work associated with running 10% of the Internet, or rather the morons that go along with it. What’s worse, people who will never make a decision or people who bitch and moan and throw out ideas because of VERY nice corner cases?Anyway I don’t want to seem like one of those old coots who hang out on forums and blogs and bitch and moan about everything and have “grognard” or “curmudgeon” in their names and hate new ideas, younger gamer …

ARG!! I can’t do it! I can’t write like this! Jesu Christo! Even TRYING to pad things out I can’t pad the shit out enough. How the hell did Clark every write this thing? It’s page after page after page after page of words Words WORDS. Every single detail of this module has about nineteen gazillion words associated with it. I know, I know, I’m sometimes prone to hyperbole, but oh man, that paragraph above is just ONE paragraph. Now tack on two or three more and you’ll understand the size, density, and detail of even the most common of keyed entries in this module. The most common! I can’t handle it! My eyes glaze over. I just don’t care anymore after awhile; I want the current room description to end. I’ll do anything to make it end (well, except stop reading … ) The module has about 80 pages, three more of dedicated maps, and like 18 more just for illustrations to show players. That should be your clue that something puzzle this way comes. Wait, hang on, here’s the best part: the adventure has 17 rooms in it! Yup, 80pages for 17 rooms. Ok, that’s unfair, there’s also a town with 47 buildings described. But that doesn’t matter because it’s just flavor text. A million pages of flavor text but still just flavor text. That’s unrealistic. And never ends. Yes, unrealistic. I like fungus men and white dragons that shoot leaser beams form their eyes in spaceships and _I’M_ calling out something as unrealistic.

The first thirteen pages of this adventure are background information. Wait, no, the first four pages are a short story (what’s that withering sigh sound that Sideshow Bob makes? Maybe it’s called ‘Withering Sigh’?) that is then followed by only NINE pages of background information. I’m gonna be real honest with you here: I didn’t read it all. I skipped the short story. Look man, I’m generally willing to fall on the grenade for you people and buy these things, read them, and review them but I am NOT going to read a bunch of short fiction. I don’t care, I don’t care, I don’t care! I’m happy for you that you wrote something fictiony. You’re better than me. But I prefer Analog & Asimov and don’t want to have to wade through amateur fantasy. Ok, I mean, I didn’t. I skipped over it. And then ranted about skipping over it. But I don’t want to read your fiction and I don’t want to read none pages of background material for a module with 17 rooms in it. I shall rewrite it, hang on. “The town has a thieves guild that operates under the tactic approval of the king. The leader is called The Arm and the guildmembers are called The Hand.”Hmmm … less than nine pages I think. Yeah, I’m being an ass here, but seriously man this is just WAY too much background. Verbosity is seldom an effective communication technique.

We can now begin the adventure. The teaser encounter is a page long. The players find some dead bodies on the road. That’s it. One page for all that. But wait, there’s more! Each encounter had three separate description. THREE! The first is when you just look around, the second is when you look more closely and the third is for when the players look closer still. Then there’s the italic text. All of the DM text (of course there are large amount of read-aloud text. Silly you!) is in italics. Not the read-aloud, but the FAR more numerous DM text. It’s VERY hard to read and to pick out things in it. Masses and masses of text in italics interspersed with normal text that it meant to be read aloud. A whole page. Devoted to finding ten dead bodies. A whole page.

Encounter one is one page long. Encounter two is fifty or so pages long. Hmmm, I do not think that word means what you think it means. The first part of this section details the small town which is the fluff for the adventure. The town has about 50 or so buildings, about 45 of which have a keyed entry associated with it. There are also roughly 200 thieves in the town who report to the guildmaster. The town takes up sixteen pages. Everyone is either in the service of the guild or paid off by the guild, with just a few exceptions. Most of the exceptions know of the guild and approve of it. The others are nobodies. The townspeople are boring, don’t interact with each other, and most of them report back immediately to the guildmaster. The town exists for one reason: to drug the party and make then unconscious. Note that I said the party, not the players. Seriously, the entire point of the place is to knock out the party. Once Ko’d they get taken to the secret lair of the guildmaster. There he questions them and sends them to his Training Grounds. Wait, WHAT?!?! Yup, it’s a fucking training grounds adventure. The most lazy of all adventure types. “I don’t care, I just want to put in some cool rooms.” Yeah? Guess who else doesn’t care.

Ok, time for the adventure. The party is sent in to the thieves guild training ground that’s under the town. Yes, I know the town only has 50 buildings. Shut up, we’re finally at the adventure. The party will now take an absolutely positively linear path from their start to the end room while TEETH GRITTED TEETH GRITTED ‘proving themselves.’ TEETH GRITTED TEETH GRITTED. I will now transition this review. Let’s pretend that the first 42 pages did not happen and you’ve just been handed a tournament module for a game you’re running. ‘Good King Despot’ was sold out so you had to grab this one. It’s a decent tourny module. Well, there’s still WAYYYYYY too many words, and the whole italics thing is hard as hell, but there are a large number (17 or so …) or puzzle rooms for a party to work their way through. You;re gonna love this. “You descend the stairs and see a 30×30 room in front of you. Packed in to it are 50 unarmed men, the greediest men in the world.” Yes, it’s stupid, but in a fun goofy kind of way that one-shots SHOULD be. There are a couple of traditional riddle rooms, a couple of goofy rooms like the one above, and quite a few more subdued puzzle rooms. Rooms with a monster and some kind of obstacle or gimmick that lets you get by the monster. There’s one additional problem in this section; the NPC. ‘Brain Fry’, a trusted associate of the The Arm, is sent along with the party to observe them. You know those DM’s that have a favorite NPC, or worse, their own player character, join a party and favors them? Something similar goes on here. He darts ahead. He begs the party not to kill certain people/monsters. He helps up defeated monsters and tell them “don’t worry buddy, help is on the way.”

So, rip ouf the illustration section of the book, recopy the 17 room encounters in to a format that’s terser and easier to read, and kill off the NPC and you’d a decent tourny module for your next local con! Good luck!

1 Response to A Challenge of Arm’s