DCC36 – Talons of the Horned King 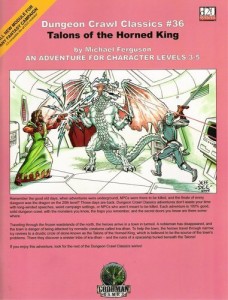 Traveling through the frozen wastelands of the north, the heroes arrive in a town in turmoil. A nobleman has disappeared, and the town is danger of being attacked by nomadic creatures called kra-dhan. To help the town, the heroes travel through narrow, icy ravines to a druidic circle of stone known as the Talons of the Horned King, which is believed to be the source of the town’s problems. There they discover a sinister tribe of kra-dhan – and the ruins of a spaceship buried beneath the Talons!

Check out that cover man! There’s a frigging dragon shooting laser beams out of its head at two adventurers and everyone is obviously in a spaceship! I wouldn’t normally review a DCC module but that is SOOOOO COOOOL!!!! It’s too bad the module SUX … 🙁 There’s a reason I wouldn’t normally review a DCC module and that’s because they suck. Other than some older art styles, technically anyway, they don’t tend to have an Old School vibe. ANd yet I continue to get suckered in. At least the marketing side of Goodman knows what sells. There’s enough of them that one or two must not suck; maybe one day I’ll discover them.

Back on target. The idea here is that there’s great face buried in the snow and ice with metallic towers jutting out over it that resemble a crown and a clawed hand. Hence the name, Talons of the Horned King. A meteor flew overhead recently and since then the gentle snow apes have gone berserk and are killing folk. In addition some noble kid took his flying machine (Really? A flying machine? 2e/tinker gnome nonsense.) in that direction and disappeared. It’s not too bad up to the flying machine nonsense. Comets and berserk snow apes could be cool, as long as there’s Saving the World involved. But of course, it turns out that IS involved. Thus begins the players journey in a straight line to their goal.

I’m not kidding, it’s a straight line. The adventure starts with the party going through a canyon. They can’t fly there. They can’t climb the walls. They just trudge along in the ice and cold having encounter after encounter until they reach the open spot where the face/ship is. I’m pretty sure this is the absolute minimum effort required to write an adventure; anything less and you’d have to call it a setting or sandbox. Straight line. First fight some Snow Orcs that jump out in ambush. These are just like regular orcs but they have the word ‘arctic’ in their name. Kill a second group of orcs. Navigate a bridge the orcs trapped. Fight a polar bear. Climb over an obstacle. Kill some snow apes. Then, finally, something interesting happens. There’s a tree house with a decrepit hag in it that can provide some Oracle-type visions for the party. I always think of that scene in Conan, or Hawk, then things like this show up in an adventure. It’s pretty cool, but it’s also WAYYYYYY too long; an entire page of text is devoted to it. DC’s of hut walls, DC’s of metal chests, a quarter column of stat block text for her and her cat familiar. This is the style of 3E, and it sucks. It’s impossible to find anything in the text. Instead you get mired in all of this useless trivia. Anyway, after the witch there’s another unavoidable ambush before the party gets to the adventure site.

The site around the face has nine keyed encounters. Snow apes, orcs and snow drift men make up three. Nothing interesting in those, just hack jobs. Theres an encounter with a frost giant skeleton that is described well and an Iron Spider that hints of things to come. The spider in particular is an interesting enemy and the area around the face cal some cool/weird visual fluff going on that add a little to otherwise vanilla nature of the encounters.

Inside the ship there are nineteen encounter areas. The map is essentially a long central corridor with a few rooms and side corridors off of it. Nothing too interesting there. There’s a few loops but they seem cosmetic and out of place. There’s a 10% chance of a wandering monster every 30 minutes unless the party triggers the security alarm, in which the rapid reaction of the inhabitants change the percentage to 20%. Huh? Perhaps there’s a good reason they are loosing their inter-planer war …

There are some prisoners that can freed in the ship but for the most part it’s pretty uninteresting and nothing like joy to be found in Barrier Peaks. Enter a room, kill the monster, move on. There’s a decent airlock/trap encounter and a nice illusion encounter and a garden for the party to mess with, but otherwise noting interesting to interact with in the rooms. There are a couple of interesting monsters: a snow worm with a mini-missile launcher grafted on it and a dragon that can shoot laser beams … those are both pretty cute. There’s also a WIDE variety of futuristic weapons, armor, and gear to loot, probably too much. More accurately, there are too many batteries for the weapons and gear. There are about 55 batteries for the weapons and like 35 grenades. Barrier Peaks had a decent number but it was A LOT larger.

The whole thing is mired in boring encounter and rooms with EXTREMELY length descriptions that do very little to add to the ambiance. Sad Face.

1 Response to DCC36 – Talons of the Horned King