SW1 – The Secret of Redscar 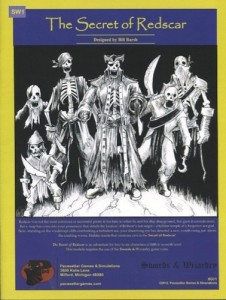 Redscar was not the most notorious or successful pirate in his time so when he and his ship disappeared, few gave it consideration. But a map has come into your possession that details the location of Redscar’s last target—a hidden temple of a forgotten sea god. Now, standing on the windswept cliffs overlooking a turbulent sea, your discerning eye has detected a cave mouth rising just above the crashing waves. Hidden inside that ominous cave is the Secret of Redscar!

Pirates! I HATE pirates! I LOATHE THEM! They rank right up with smugglers as stooopid enemies. Fortunately this adventure has no pirates in it. The cover shows pirates. The blurb talks about pirates. But no pirates. Kind of anyway. Yeah! What it does have is a pretty interesting little OD&D adventure. It might work well as a stand alone or as a sub-level to a megadungeon.

TREASURE BATH! Er, I mean TREASURE MAP! These were a solid staple of adventure gaming once upon a time. A simpler time, when fighters were known as Fighting Men and murder hobos roamed the land in search of gold and magic. As time passed the venerable treasure map lost its place. Adventurers were now about Saving the World and Doing Good instead of a pretext for getting together with your pals, drinking some beer, and reclaiming lost treasure. I miss treasure maps. I’m glad to see one appear as the hook in this adventure. Hiding a treasure map in the last haul is a great way to get the players involved in the next adventure. Anyway, the players find a treasure map that the pirate Redscar once briefly owned. Following it takes them to a sea cave where the adventure begins. This all takes place in two and half pages of introductory text. There’s a lot of background presented in that section which is duplicated in the adventure of not needed. It does lay out the various factions in the caves (Factions! Yeah!) but otherwise there’s a bit too much text here. The factions are great through! There’s a wide variety of opponents, they make sense and work well together. The dungeon is small, eighteen encounter keys in an ‘L’ shaped map that has corridors & rooms branching off of it with no wandering monsters. The map is overly simple and some vermin on a wandering table would have been a nice addition. Gotta drain those party resources and keep them from camping out!

Onward! The dungeon has roughly four areas. There are the natural caves that have some opportunistic inhabitants: a sea troll and sea ogres primarily. While the encounters are rather simplistic they do work together. The troll comes to the ogres aid and the ogres to the troll. In addition the ogres sort of launch themselves out of their pool like missiles in order to knock people over. That’s kind of a neato little effect. This section also has a great little hidden treasure feature. VERY old school and very cool to see it. I like the kind of variety that brings up. A hidden spot so classic that its guaranteed to bring a wash of nostalgia when/if the players find it. Dungeon dressing indeed!

The next section has some skeletons guarding a temple. These are the pirates, or what’s left of them, cursed for all eternity to guard the merman temple because of their desecration. Yeah, it’s just some skeletons pirates, uh, a lot of them that can’t be turned, but I still like it! The whole “can’t be turned” thing is getting old though. It brings up one of the great dilemmas in D&D. Undead are classic D&D monsters and skeletons are the most classic of all but they are completely ineffective against a party with a cleric. Either you have to put in a boss undead at the high end of the clerics turning power or you have to make them unable to turn for some reason. This goes back at least as far as module B2 where the undead wore amulets that made them harder to turn. I wish there was a better solution. Oh, there’s also a nice bit of warning in this area: the corpse of a mind slayer being eaten by tiny hermit crabs! Oooooouuuuu, Gross! And a decent warning …

After a bit of excavation the party will break in to the lost city that the temple was a part of. The chief opponent here is another mind slayer and his minions. There’s likely to be a big ass battle in the city streets. There’s also a nice little obscure treasure for a thinking party located in a secret wine cellar. There are two other encounters in this section to finish things out. One if with a demon and the second is with a sea serpent. The demon encounter takes up an entre page of text and is WONDERFUL. It’s a classic OD&D demon encounter, or what I think one is anyway. There’s foreshadowing. There’s a bound demon. Everyone KNOWS something bad is going to happen if you fuck with it. Someone is going to fuck with it. The dungeon dressing is great, the special text is great, is hugely evocative, and it screams classic D&D. The sea serpent finishes the module off and is just a big boss fight. But oh man, the demon encounter! The wizard in Tower of the Stargazer is one of my favorite parts of that module and this completely outdoes that. Very 70’s. Very cool.

Mind Slayers, aquatic ogres and sea trolls are not exactly new monsters. The Blood Urchins are though, or at least obscure enough that I don’t recognize them. That’s nice and should cause the players a good little freak out when they show up. They have missile weapon also which should cause the players to retreat and think up some plan to destroy or bypass them, which is a nice little addition to the usual hack and slash. The mundane treasure is pretty mundane, coins and the like for the most part although there are a couple of items, like silver chains, that the party can strip off the walls and steal. I like a good variety in mundane treasure since it makes things a lot more interesting for the players. I’ve also found that a party is much more likely to keep/wear/use mundane treasure when it actually gets a description. Go Figure! The magic items are a mix of boring book items like sword +1 and potion of healing and more interesting book items like a rope of entanglement or horn of blasting. There’s a nice dagger +1/+3 vs humanoids that glows red when humanoids are near. Now THAT’S a magic item! I suspect the party will keep that for a long time to come, even when they find ‘better’ items.

It’s not the weirdest module I’ve seen this year and it’s not the one with the most OD&D feel but it does a pretty decent job of creating an OD&D feel. I’d not hesitate to use this as a sub-level to a megadungeon or use it as written and expand upon it to create a larger environment for exploration. There are plenty of potential hooks to helps the DM do that: mind slayers, dwarves, mermen temples, lost cities, shafts in to the earth. I’m pretty sure I’m going to keep this one.