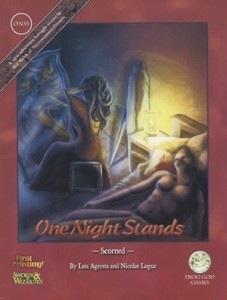 The PCs arrive in the bustling town of Whiterush and are hired to help solve protect a caravan from bandits. However, there is much more going on in the town than meets the eye and the PCs are in deeper than they originally thought.

Are you a fan of the noble and misunderstood orc or did you cleanse the earth of the women & children in the Caves of Chaos? How your players react to that issues will probably dictate how you all receive this adventure. It’s event based. It’s short and probably linear. And it has honorable orcs.

The party is hired by a merchant to go stop some marauding orcs. They’ll hide out in his wagons with some of his men and when the orcs attack the party can get to work. The other mercenaries are assholes of the highest order. When the orcs attack the party gets to see them use blunted arrow, bolas, and subdue tactics. They also call off their attack when there’s a chance some wagon rider might get killed. The merchants other guards hack down the caravans own drivers, apply poison to their blades, and all sorts of other EVIL things. Oh, and the orc leader is a 1/2 orc woman who’s pregnant. Oh, and the merchants reinforcements that arrive later include a snide bat-humanoid. Hmmm… maybe all those rumors in town about the merchant being a jerk and mysterious and the sudden marriage of his daughter to the local lords son and his thuggish troops on every street corner, taken with this behavior by his men, mean he’s EVIL and we should help the orcs!

The party is meant to join forces with the orcs and retreat back in to the woods to their lair. Or they can track the orcs to their lair at which point the orcs will negotiate with the party and try to get them to join their side. If so, then the next day the orc camp is attacked by the merchants men and fight #2 begins. From this the party can learn of the impending wedding ceremony and the plans to run the wedding party boat over a waterfall, killing almost all of the guests and immediately leaving the merchant and his evil daughter the new rulers of the land. Bonus Points there for Classic Villainy. That’s it, three encounters. Caravan ambush, orc lair attack, and riverboat battle.

The module tries to insert ome orc culture and role-play in to the parties visit to their camp. Cooking orc falls in love with someone who compliments her. They make jokes at the parties expense. They pretend to be offended and all laugh, etc. They also live in a giant tree top village over an idyllic lake. It’s got a bit too much cultural relativism for my tastes. You can explore gender issues, sexuality, and cultural identity all you want in your game. I want to burn down the orc village and hear the lamentations of their women … well, before I slit their throats.

In contrast the bad guys the merchant hires are a nice crude bunch of jerks. They get too drunk. They fart and make crude jokes about the party doing it. They scowl. They obviously use poison. They hack down innocents. Those are my kind of guys! How come I can never find NPC guards like that when my guy is hiring in town? The town proper is a bit too refined. A nice eatery, but only two inns. A craft store. Real, a craft store run by a halfling. I shit you not. In a two inn town! With a paddleboat riverboat for the wedding ceremony! A bit too much for me. The NPCs are really well done, as long as they are not orcs. The townspeople come alive, as do the real villains and their men.

The worse sin is probably the event based nature of things. After the party get to certain part of the boat then the roof will be torn off X rounds later. X rounds after the defeat of the last bad guy then the boat will go over the falls. I understand wanting to heighten tension but this is all a little too much. I would have preferred a timeline and general locations rather than a railroad counted in minutes.

Somewhere in here is the basis of a great adventure. A REALLY evil merchant, toughs who run the town, crude and barbarous orcs with an alien and offensive culture, and needing to ally with them for some reason. You could pick that stuff out and have a pretty good time in vegas with it!