Dusk of the Dead 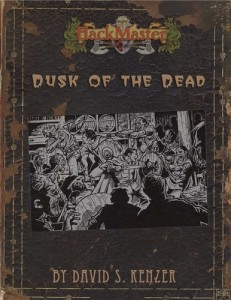 The long hours on the road have left you yearning for a good night’s rest at your favorite way station. Decent food, a clean bed and live entertainment have never sounded so good – especially so with those storm clouds looming on the horizon, mounting winds and periodic raindrops heralding some fouler weather to come. The warm glow of a fire and a hot meal will be welcome, but where is the wait staff?

This is the second of two Hackmaster modules I picked up at GenCon. They didn’t seem as jokey as their initial releases and I knew Hackmaster was trying to go legit so I thought I would pick it up and see how it compared. This is the better of the two.

If the Caves of Chaos scaled up to a higher level and the evil temple was a major force in the campaign world then the two page backstory in this module would fit perfectly. Some Evil High Priest is destabilizing the region. He killed a bunch of humanoids, blamed it on the keep to rile up the humanoids, destroyed an isolated inn, diverted the keeps patrols, etc. Nice Going EHP! This adventure deals with one part of that plan; the party stumbles upon an inn they’ve visited before only this time it’s full of bodies. This works best if the party has visited the place before, maybe on their way back and forth to the caves. It also raises one of the central problems with the murder hobo lifestyle: forming attachments is not a good thing. Getting married? You can expect problems with your wife. Buying a house in town? Expect it to be burnt down. Like the village? There’s an orc raid coming. There’s degree of continuity and a feeling of consistency in the game world when these sorts of character/environment relationships are established, which is a great thing. And then the DM takes a ham-handed approach to making the players/characters care about the latest bad guy. Why form an attachment when you know that the DM is just going to kidnap/kill them? Why, it’s enough to make someone turn to murder hobo’ing!

The players walk right in to the inn, as they usually do, and are confronted by a scene of chaos. Soon hordes of zombies start lumbering in to the main room and the adventure begins. The inn is built in to a fort type structure with small outbuildings living the edge of the fort walls. It’s actually not a bad little set up for an inn/way-station, and it’s a good little pace to be surrounded by undead. The adventure is a combination zombie & mystery so atmosphere is important. It’s dusk/night, rain is falling and getting heavier. The players are most probably outnumbered/gunned by the zombies. They are scratching at the doors and windows trying to get in. Most rooms have scenes of gore/struggle in them, some quite grizzly. There are lots of rooms/areas with zombies locked in. Sounds of combat attract zombies from nearby areas (an order of battle! Yeah Kenzer!) It’s still not quite clear to me that it’s enough. It feels like there’s some atmosphere missing. Maybe what I’m looking for is a few more tips on how to keep the pacing going and keep the atmosphere strong. Horror requires a good DM.

The encounters are pretty good. These range from the initial set piece attack on the common room when the characters first enter the inn to barricaded stairways and a PTSD survivor who nags and annoys until she gets what she wants and then goes catatonic. Most of the encounters provide some additional details when searched, or even a clue to where some treasure is. Drag marks on the ground actually lead to something. The designer also seems to know how skills work. Searching generally finds something without a skill check: a dropped club, or a blood-soaked pouch. There’s lots for the players to do, search, and find as they explore the devastated way-station, almost all of which relate to details of the attack.

There’s a nice one page section at the end dealing with consequences. What would happen if the players flee, or what happens if they loot X or turn in Y or burn down the inn, etc. I appreciate this sort of detail. It helps beginning DMs get in to the campaign mindset and helps turns episodic adventures in to the kind of longer ‘story of the characters’ that I think makes a good campaign. It also helps reinforce that the world exists outside of the actions of the players AND that their actions have consequences.

So, no new monsters. No new magic items. Real aloud text. LONG room entires. Nothing weird. But then again, this is not that sort of adventure. The zombies here are much more screen zombies than the standard D&D zombie which is a great thing. We get i to ruts, I think. “12 zombies attack” instead of the flesh-eating gore that’s common to all zombie media. Making monsters monstrous is a very good thing indeed.

We’re having a Halloween meetup this year. I think I’ll convert this to D&D and run it for the event.