In the Realm of the Elm King 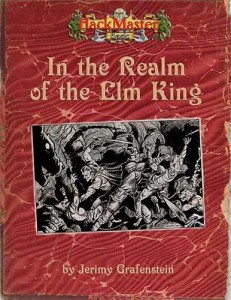 Though decorated for a festival, the village atmosphere seems ominously muted. Vendors relax in the shade but seem preoccupied with inner thoughts, showing little interest in you or the coins you might spend on their wares. You see no dancing and hear no song, and small groups of people only mutter as you pass, staring back at you with sad, deadened or suspicious eyes. You wonder what recent troubles hang heavy over this place…

I wouldn’t normally review a Hackmaster module but a couple of things came together to change my mind. I know Hackmaster is trying to go legit, especially with their Basic book, and at first glance this module didn’t appear to be a joke product. I was right, it wasn’t a joke product; it just isn’t very good and few redeeming qualities. Or maybe I’m missing the joke and you’re supposed to LARP the adventure.

After wading through WAY too much backstory and introductions, five pages worth, the adventure finally shows up. It is a travesty. Make a Current Affairs skill check to find out that a young girl has gone missing. Make a second check to learn that she was not the first child to go missing. Role-playing? What’s that? I wonder what happens if the party fails the check? There’s no adventure? Oh, no, wait, there IS an adventure if they fail their check. They get to go clean out the giant spiders from the cellar of an old lady. I am TOTALLY not shitting you. An actual ‘clean out windows basement’ quest. Someone didn’t try very hard did they? There is one interesting thing associated with this: if the party claims the spiders were the cause of the kids disappearances then there will be a big celebration. And then another kid will go missing and the villagers will be bitter and resentful of the party. That’s a nice little bit of added flavor, and something that also shows up in … Blood Moon RIsing, I believe. Anyway, the DM relents and allows the party to go on the adventure. This means wandering around the countryside and having some random encounters. Well “random” would be a better way to mention it. There is no wandering monster table but rather six encounters that “the DM can throw at the party.” Only two of these are at all interesting. The first is a wandering group of farmers on the road that are waylaying people as they search for the kids. That’s a nice bit to include, although it feels a bit isolated from the context given in the village. The second is a dead goblin that fell off a cliff and broke his neck. Again, a nice bit of flavor. Anyway, the party wanders around the woods being bored until they find some clue to ‘the Elm King.’ Going back to the village exclamation point/quest giver reveals that there was a guy named the Elm King around these parts awhile back. The old woman that lives nearby may know more. A quick hike to her home and some role play lets the party discover that her son is the Elm King and he hangs out near The Red Spur. A half day journey back to the village to find the location of The Red Spur. The party then has to make 18 wandering monster checks on the day and half trek to the Red Spur. Well, not checks. Essentially the party rolls to see which monster they encounter every 2 hours on their journey. They WILL encounter a monster, you’re just rolling to see which one. A table is provided, and we’re instructed that no duplicates should be used, so if a duplicate is rolled then just re-roll. Fine. The table has six entires. A half day in the party will have fought all six encounters on the table and then have nothing for the next day. The best of the encounters is probably the butchered body of a bear. I like these kinds of clues and the like that indicate that something is around and that the party is not alone in the world. It gives a good sense of time. Next up is a seven room encounter at Red Spur Gorge. There are some caves and passages here but none of it is really relevant. It’s just an opportunity o hack down 24 kobolds before killing The Elm King, a bugbear. It’s boring.

The old woman is throughly evil and could make a good addition to any game on an ongoing basis, but the village is boring with not much going on. The mundane treasure is nice enough: a bear paw, an upside down dwarf skull holding coins, wine, linen tableclothes, etc. The magic treasure is lame though and is just normal book stuff. The adventure would have been a bit cooler/creepier if the Elm Kings forces had been bandits instead of kobolds and they KNEW their leader was a fearsome bugbear and that he and his mate ate children live to jump start their fertility. Those are my kind of bandits! But alas, it is not. The adventure is really VERY basic. It has a couple of nice things to lift but otherwise ranges from Boring to Bad.