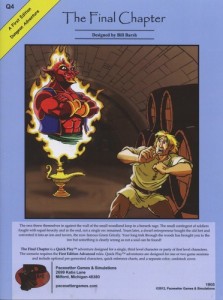 The orcs threw themselves in against the wall of the small woodland keep in a berserk rage. The small contingent of soldiers fought with equal ferocity and in the end, not a single orc remained. Years later, a dwarf entrepreneur bought the old fort and converted it into an inn and tavern, the now famous Green Grizzly. Your long trek through the woods has brought you to the inn but something is clearly wrong as not a soul can be found!

Pacesetters Q line is their quick-play series, meant to be finished in a single evening. This, their latest, is the most interesting of the line so far. It is set up so that the party stumbles across it just as the hook events have finished. Thus the party finds things in a very unusual state with some things going on around them … or not.

The idea here is that someone in the inn has found an old broken efreet lamp that was hidden in the inn. The efreet comes out, severely weakened, and then makes its way to the main room. Upon seeing an efreet everyone there does the sensible thing and flees. The efreet leaves to find some jewels needed to repair its lamp then the party shows up, less than 30 minutes after the inn is abandoned. I love this kind of In Media Res thing and this is not a bad set up. A recently abandoned inn with only a few signs of violence is going to be quite the puzzle for the party. I could have used more of this, with events unfolding around the party as they stumble from place to place, but then again this is a quick-play adventure. There’s really only two other events that take place: the efreets return to the inn and his death curse, neither of which really count towards the In media Res feel. Anyway, the party will find some clues in the inn. A geni lamp in the basement next to a dug up floor tile. An old diary. A new diary. A very good map of the forest the inn sits in. From these the party will learn the history of the lamp and what’s wrong with it. Three jewels from the lamp were hidden and three areas of interest are mentioned on the map and in the journals. Exploring them will eventually turn up the three jewels, which the party then needs to destroy to destroy the efreet.

There are a handful of encounters provided. Former guards return to try and loot the inn while the party is investigating. There’s a skeletal THING at a mass grave site. Mushroom men now inhabit the small cave where the orcs once laired. There’s a fair amount of text provided for these encounters and yet its going to take a decent amount of on-the-fly DMing to pump these up. The thugs will need to posture and negotiate and threaten and maybe ambush in order for their character to be revealed. The skeletal thing will need some good flavor texting from the DM to convey the actuality of what is happening, and the fungoid men will need some weirdness added to them to help convey the strangeness of the cave they inhabit. Despite the length of text on the bare bones of these encounters are provided. There’s nothing wrong with that … I think I’m more commenting on the length of the surrounding text and yet the lack of specifics. There’s a definite nugget of OD&D in here. The thugs are just humans looking to make a buck. The skeletal THING is a kind of non-standard skeleton monster. The Mycanoids, well, they are a little unusual to encounter in adventures and mushrooms always bring that OD&D groove. Likewise the magic items are not just book items. Well, they are and they are not. A sword of humanoid slaying, a javelin of piercing and a ring of shooting stars are present. Book items but not “Sword, +1” book items. I like the extra flavor that these sorts of non-standard things bring to a game. While they are no Oracular Skull they are very cool things that players would probably treasure.

Not quite as gonzo, weird and whimsical as I prefer but it does a decent job for what it is, a one night module, while providing a flash of that OD&D feel.