F1 – The Fane of Poisoned Prophecies 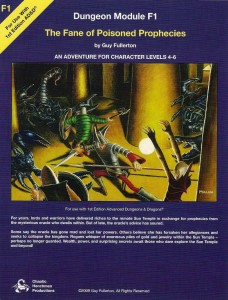 For years, lords and warriors have delivered riches to the remote Sun Temple in exchange for prophecies from the mysterious oracle who dwells within. But of late, the oracle’s advice has soured. Some say the oracle has gone mad and lost her powers. Others believe she has forsaken her allegiances and seeks to collapse the kingdom. Rogues whisper of enormous piles of gold and jewelry within the Sun Temple–perhaps no longer guarded. Wealth, power, and surprising secrets await those who dare explore the Sun Temple and beyond!

This adventure has quite a few great ideas. It’s a little verbose in places which is a distraction as you try to figure out what is being described. The module feels a lot like a transition module between OD&D and AD&D, or maybe a bit like the old Judges Guild modules except quite a bit more coherent. A mashup between The Fantastic of OD&D and the more hardcore realism that I associate with AD&D.

It takes about two and half pages to get past all of the introductory text and in to the adventure. This is pushing my tolerances for what I’m willing to sit through. To be sure, it’s not all backstory. Introduction, Notes for the DM, player character levels, scaling, hooks, normal temple operations before the ‘issues’, a section on the invaders and the finally a section on pseudo-magical things to be found in the adventure. It’s not the usual masturbatory fan-fic type background information but it’s more that the entire section could be tightened up a bit. It IS a pretty sweet set-up though: There’s a magical stairway to the moon! That, in and of itself, is a pretty cool thing to set your adventure around. It has that kind of fairy tale element that I’m so fond of (or maybe it’s a folk tale element I’m fond of? I should figure that out one day.) I’m going to ignore logic here and say that it’s an appeal to elements of our shared past and that when some of those elements show up in a game, especially at the beginning, it does a fantastic job of setting the mood and getting players in right mind-set. Anyway, silvery magical stairways to the moon are BAD ASS … and then the bad guys enter. I normally don’t care about spoilers but this time I’m going to keep the secret: it’s not spoiled on the cover pic or in the front/rear text so I’ll not spoil it here. The bad guys in question are just a normal old D&D MM monster and yet they make TOTAL sense coming from the moon AND they contribute to that fairy tale feel by coming from the moon. How cool is that? Some generic old D&D monster gets new life in a totally non-canon way that make perfect canon sense and appeals to the folk/fairy stuff that I love. Nice job Mr. Fullerton! One more thing: I gained some insight to dungeon motivations in this adventure. Why do dungeons exist? Why do people go in to them to adventure? None of it makes any sense and most modules have some token throw-away reason or explanation which we all accept so we can have fun. I got a new idea from this one though, a Classical idea. There’s an oracle in this dungeon, and a somewhat accurate one at that. That’s a REAL good reason for people to enter a dungeon. Lots of people, from kings to beggars, want answers and the oracle can provide them. That’s why people go in. That’s why treasure exists (offerings) and that’s why the dungeon still exists. Very Greek. There’s no relation between this module and that statement, other than they both have oracles, but I think you build an entire megadungeon around there being an accurate oracle in the bottom of one. Need I remind you the value of a module that inspires you and gets you excited?
Moving on, there are honest to goodness places to explore BEFORE you go the main adventure site. I count eight different sites around the main Sun Temple, most of which have seven or so different areas to explore or interact with. These sites are full of clues to some of the puzzles, and the bad guys, in the main temple. They do a great job of foreshadowing the main enemy. Thee are allies and enemies, things to be avoided and tasks to accomplish. This FEELS like a real place that had something unfortunate happen to it. One of the best parts of Stonehell is the outside area, level 0 so to speak. These sorts of ante-chambers to the main dungeon do a fabulous job of setting the party up for what’s to come. The main dungeon has 32 keyed encounters. The map has a decent amount of detail and could almost be a section pulled from a real megadungeon map. There are some loops, and it has a nice 3-dimensional feel to it because of steep stairways. There are a decent number of statues, pillars, and intelligent secret doors on the map, as well as multiple ways in to the main complex, two of which should be immediacy obvious. I REALLY like the multiple entrance thing in dungeons because of the variety of play it supports. A solid effort well above average. The wandering monsters tables for the dungeon and the countryside are small but they utilize the monsters found in the adventure. For example, giant flies encountered are the ones from the giant fly encounter in the module. Bad Guy encounters are from those in nearby rooms, and so on.

The actual encounters are a mix between puzzle, social, and combat. I’m pretty certain that a combination of social skills and attention to detail could allow an experienced party to negotiate most of the temple complex without having to get in to very many serious combats. The social elements is mostly with the invaders of the temple, the ‘Bad Guys.’ They are a lazy good for nothing lot and are willing to negotiate with the party. Thus not only can the hero parties just lay in to them but murder hobo parties can talk to them and work out a deal or two for fun & profit. The magical temple guardians are where the puzzles mostly come in to play. A smart group that pays attention should be able to avoid or bypass the guardians and get quite a bit of loot in the process. I’ll point out one of the interesting encounters in the wilderness. There’s an old winery, abandoned because of the troubles, with two hill giants camped out in it. They are slowly working their way through the wine supply and thus are often drunk. They also scattered some caltrops outside their main room/lair! Once again we see the appeal to the fairy/folk tale, this time with drunk giants and wine. That’s combined with a decent bit of intelligent monster actions in the form of the caltrops. Given time these guys will probably wander away when the wine runs out. That sense of time passing and the world moving around the party isn’t as present as I would prefer but there are some references to it. Former temple workers, the drunk giants, and the wandering monsters form nearby rooms, for example. The exploration of unusual items tends to be rewarded as well: there IS treasure in the bottom of wells and sticking your hand in a mouth DOES get you something. There actually COULD be a secret door at the bottom of that cistern, etc. I really appreciate these intelligent inclusions of the classics, all of which have some twist to keep them fresh.

The module does rely too heavily on book magic items and monsters. I like to see new magic items and new monsters because they bring a freshness to the game. The players don’t know what to expect when they encounter a new monster and that communicates the feelings of fear and apprehension that they SHOULD be feeling in a dungeon. Likewise magical items have to be new & fresh in order for magic to seem mysterious and fresh. Sadly, there are no new magical items or monsters in this adventure, although creatures from the Fiend Folio do make appearances. There’s also that verbosity and attention to detail which detracts form the main adventure and cause my eyes to glaze over. “Rooms walls are only 10 fete tall, and ceilings gently dome to 15 feet high at the apex. Hallways are only 8 feet wide, with 7 foot high walls, and arched ceilings that are 8 feet high at the center. Doors are 6 1/2 feet high, 3 feet wide, and 3 inches thick.” etc etc etc. There are several text blocks of this type located throughout the keyed encounters. It amounts to a great deal of detail and explanation to pick through to find what you want. Tastes differ here but I prefer a more terse format with less detailed data. I think a bit of this is an attempt to explain the ‘why’ behind certain things. IE: “X radiates dim magic thanks to a Nystul’s magic aura but it has no magical function.” or the details of how a certain secret door works. Something like “at the bottom of one of the indentations is a button that when depressed will emit a click and open the secret door on the north wall.” I’m used to seeing this abstracted away or handled in a less verbose fashion.

I don’t keep most of what I review but I think this one has enough merit to stay on my shelf.

2 Responses to F1 – The Fane of Poisoned Prophecies