CLA4 – The Ruins of Ramat 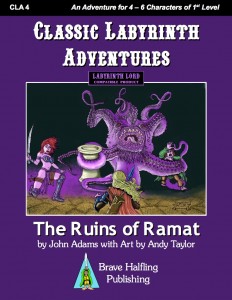 A little girl comes running and crying into the center of the village. When questioned, she sobs that she and her dog were playing just outside of town by that old stone building on Witch’s Hill, when a giant, clawed creature came up out of the ground and took her dog. The girl is obviously completely terrified and her dog, which never normally leaves her side, is nowhere to be seen. You and your companions volunteer to look into the matter. After all, local legends say that vast amounts of treasure lay under the darkness of Witch’s Hill. The village elders agree to let you and your party investigate the incident; indeed they almost seem relieved to do so.

This is a very basic and very traditional first level adventure. The dungeon is pretty small, just 17 rooms or so, and is laid out in a giant square corridor with rooms intersecting it or branching off of it. It’s a pretty basic design that is augmented by a pretty basic wandering monster table: normal rats, giant centipedes, giant bats, and skeletons. That’s some pretty basic monsters … probably too basic. I generally like my wanderers to be doing a little something when they are met. Gnawing on a body, pooping on the parties head … SOMETHING. The dungeon entrance is a slick and moss covered rubble stair that enters in to a rubble chamber with sunlight filtering through the hole in the ceiling and a giant spider in the room. That’s one of the most interesting room in the dungeon. The place is full of vermin, spiders mostly, and undead. And by “full of” I mean 9 skeletons, a shadow, a huecuva, some bats, and two tentacle monsters awaiting some japa^H^H^H^H PC’s.

I find it extremely difficult to write reviews for products like this one. I gush incoherently about great adventures and I tear in to the ones that set my teeth on edge, but these sorts of “generic dungeon crawl” adventures are the hardest to write about. I don’t consider myself a very imaginative person anymore but even _I_ could come up with this adventure on the fly. It’s just not a avery interesting place to explore. The environment is not evocative at all, giving the DM very little to work with in order to fill it out with detail. It feels like …drudgery, I think … some kind of 9 to 5 in a job you don’t particularly like dungeon. I want a friday night adult pool party dungeon, full of liquor and loose women. I want something that makes you fantasize and gets your imagination going. Something that the party gets excited about adventuring and makes then scream or dare each other to ‘Sit in the chair! Sit in the chair!’. [I knew damn well I was gonna sit on that throne at Rients’ GaryCon game.]

1 Response to CLA4 – The Ruins of Ramat