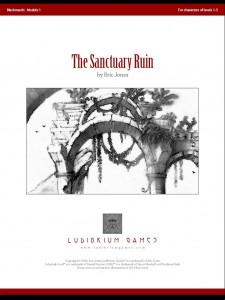 The Bleak Tower, seat of the Margrave, liege of the border province of Blackmarch—the stage is set for a classic dungeon delve, unexpected villains, and a place for adventurers to rest and recuperate not without its own mysteries.

This is the third adventure, of three, that I’ve reviewed from Lubidrium Games. The first two, Ironwood Gorge and Kingmaker, were quite excellent. This one is a more basic but VERY well done for what it is; you can see many flashes of the designers talent in it even though the adventure is more mundane. If you don’t like mushroom men and gonzo and instead prefer orcs and goblins then I certainly recommend this adventure.

It’s set in and around the Ironwood Forest near the Bleak Tower. The tower, and it’s inn, is meant to be a home base for the party while they explore the environment. The home base is quite confined, consisting of the front door of the tower, which the party are not going to get past, and the small inn. The inn has four characters described: the innkeeper, his wife, the smith who lives out back, and a provisioner who hangs out in the common room. These re not in depth description, just a sentence or so in most cases, but they do convey a great deal of information and I found they really helped me get a good picture of the NPC in my mind. This is invaluable in playing them in a game and the ability to do this in just a couple of words or sentences is a rare talent … the designer is to be lauded.

The adventure is in four parts. There’s an initial encounter on the road before the party gets to the tower. There’s a wilderness journey to some ruins, with a single programmed encounter in the forest and lots of opportunity for wanderers. There’s the ruins themselves and then finally there’s the power behind it all.

The initial encounter has the party stumbling across some goblins on the road who have ambushed a wagon and killed most everyone. It’s actually hard for me to think of something much more basic than this in an adventure. And yet … the designer does a great job describing what’s going on. They goblins are having a jolly old time roasting the flank of a donkey on the road while a dead dwarf peppered with arrows lays nearby. The leader has himself set up on a big old chest and I can just see his pot belly hanging out while he smacks on something, his face and hands greasy with meat, while the halfing in the chest underneath him squirms to get out. That’s some GREAT imagery, done with a bare minimum amount of words, that really helps my imagination when running this encounter. This encounter leads in to the inn at the tower, with its included rumor table, that will lead the players to try and find the Ruined Sanctuary.

Part the Second is the wilderness adventure to the ruins. Following an old dirt track takes the players through the Ironwood Forest for 35 miles. At a movement rate of 30 miles per day and a wandering monster check of 1 in 6 once per hour, that means roughly 6 random wilderness encounters before the party reaches the ruins. This would mean encountering 2 2hd toads, 10 goblins, 1.3 3HD giant spiders and 1 5HD cockatrice, long with one of those encounters repeated. Ouch! And thats in addition to the one static encounter at some mini-ruins on a hill with 8 goblins and a MU. (Which, again, has a great but short description associated with it. One day I’m going to deconstruct how he gets such good results from such short text.) Anyway, the wanderers feel a little heavy to me. Normally I’m ok with some heavy hitters on the table but I also like a good variety and a four entry table loaded down with heavy encounters seems a little rough to me.

The ruins have some stairs going down … along with a secondary entrance i the party searches well. I LOVE dungeons is a second entrance; it gives the party a chance to sneak around and try and be quiet before going all hack and slash and variety keeps the dungeon and interesting. The map has 20 encounter areas and is a mix between worked stone and natural caverns. The map has five or six loops in it and is quite well done for being such a small one. There’s a natural underground river, a bridge over it, tunnels that go over and under others, collapsed tunnels that the DM can expand with their own content, pools, chasms, obstructions, mini-stairs … I’m quite pleased with it. I like the extra detail provided by the multi-level terrain features and rubble; these help me run interesting combats and also break up the monotony of Just Another Dungeon Corridor. The loops help the party avoid combats or come at rooms from a different direction, as well as allowing the party and the monsters to ambush and be ambushed … and in this dungeon, flee for their lives. The goblins have the front door locked, which is going to to be the first challenge for the party. Beyond this there are A LOT of goblins present, and in several rooms the goblins are going to have the upper hand, tactically, if the party just hacks in. There is a crazed NPC in the dungeon, as well as hidden rooms you have to swim/wade through to get to, and great rot grub encounter. (I LUV rot grubs!) At some point in the adventure the dungeon is going to be raided by orcs also! This kind of stuff is BAD ASS. It makes it feel like this is a real place in the real world …. things happen outside of the actions of the party. Another example is how the goblins react to the party. If the party makes a decent incursion and then leaves then the goblins gather some poison mushrooms and poison the inns well, making everyone sick. What?!!? Monsters counter-attacking the parties base!?! Unheard of! And absolutely wonderful! Further, the orcs are smart ad tough and they use fire well. It is suggested that they be introduced by a flaming goblin that comes screaming at the party in the direction of the entrance … another example of great imagery introduced through terse writing.

The fourth act is taking care of the powers behind things. It’s short, deadly, and can catch an unprepared party with its pants down, to murderous ends. The treasure seems a bit light for a gold=xp game, and while there is a bronze cup and/or gold necklace thrown in, there not a great deal of variety in the mundane treasure. What little magic there is mostly book items, with a single new items thrown in. I do like my magic items to be more wondrous than book, as I feel it adds more mystery and wonder to the game.

The adventure feels more 1E than 0E, what with its goblins, orcs, and the like. This makes it very hard for me to get excited about it. I read another review of this module which indicated something to the effect of this module getting a lot right, unfortunately a lot of first level modules before this one also get a lot right. Well, that guys wrong. Not a lot of modules get things right. Most are garbage, even most of the TSR stuff. This module absolutely gets it right. I wouldn’t hesitate keeping it around, even in a 0E game. The ruins/inn would make a great location in a sandbox game, and might replace the goblins/orcs with bandits/raiders in order to emphasize the weird more.

It is seldom the case that I like everything a publisher puts out once they’ve got multiple modules for sale. Ludibrium is the exception. I can heartily recommend picking up all three of their modules. They are PDF, so they are inexpensive as well.