The Blasphemous Brewery of Pilz! 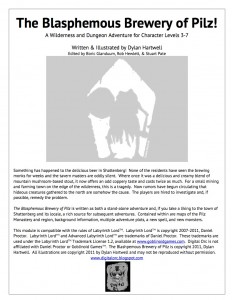 Something has happened to the delicious beer of Shattenberg! None of the residents have seen the brewing monks for weeks and the tavern masters are oddly silent. Where once it was a delicious and creamy blend of mountain mushroom-based stout, it offers an oddly coppery taste and costs twice as much. For a small mining and farming town on the edge of the wilderness, this is tragedy. Now rumors have begun circulating that hideous creatures gathered to the north are somehow the cause. The players are hired to investigate, and if possible, remedy the problem.

This is a strange little adventure in an imaginative little setting. First off, this is as much a campaign setting with hooks as it is an adventure. This is a raid on the Brewery but there’s also a few other little things that can be done and hints of a nifty campaign world. The designer has loads of imagination when it comes to adventures ideas and strange things but the adventure is pretty basic. At the asking price this module is probably worth it just to raid for ideas.

The town of Shattenburg is very briefly described, in a couple of paragraphs, and has a slight WFRP feel to it: mining companies, multi-ethnic society, town institutions … this sort of reformation germany thing is totally not my style at all, but hey, whatever floats your boat. There’s a small ten entry rumor table it’s from this that the various adventures generally get their start. Something weird turned up in the dwarf silver mine … and a small eight entry description of the mine is given. The old elf sauna cave is overrun … and the three parts of the cave are described. You get the idea; small adventure seeds with a description of several attached. Unfortunately the locations, as well as the core adventure in the brewery, are all quite small; just a couple of rooms for most and about eight for the main adventure. The maps are linear and the actual encounters/room are just not that interesting.

What IS interesting though is the flavor text surrounding the various things. The nearby elves are real jerkfaces, capturing and torturing many humans. They perform weird rituals on them. Their sauna cave is full of erotic murals. It’s a nice non-traditional view of elves. The core monster for the adventure, the Burpees, looks a bit like Bullywugs but have continually churning stomachs that create large amounts of gas and are continually surrounded by a cloud of, uh … gas. When hit by a weapon there’s a 66% chance they will explode, knocking away the attackers weapon. There’s also a nice Hold Person spider in the sauna caves. There is mushroom paste beer, a Jabba the Hut halfling, and the Loknar, complete with ‘disintegrating good’ power. The whole “dragon crime lord hires Burpees to take over brewery and start another revenue stream” reminds me a lot of the Wormy comic. I LOVE this kind of Wiz-World environment.

What this amounts to is an atmospheric setting that concentrates on general guidelines rather than specific details. We are given the name of a town and several important factions but not much else. We’re given several adventure seeds with lots of surrounding fluff and atmosphere but hen few details of he adventure. In many ways it reminds me of the format of a hex-crawl but with expanded details on a couple of the hexes. The actual adventure sites, in the Burpee controlled monastery/brewery and the spider sauna/caves, don’t have that OD&D feel I’m looking for although the surrounding atmosphere certainly does. Actually, I may be wrong there. The adventures take place in recently populated areas and so the OD&D groove I’m looking for IS included, just in a different way. Pulling bricks on fireplaces, giant fossils in the wall, smells of rotting meat, etc. It’s just that the environments are too small to support a very rich experience.

1 Response to The Blasphemous Brewery of Pilz!