The Inn of Lost Heroes 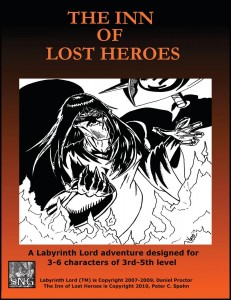 Everyone loves a good barroom brawl. But what happens when the fight gets out of hand and innocents are harmed? Witness the innkeeper’s wife Evelyn Mortigan. When her entire family is killed in a fire caused by drunken adventurers, she utters a curse with her dying breath and returns to torment all those who would practice the adventuring trade. Can the characters escape her wrath, or will they be forever trapped in the Inn of Lost Heroes?

It’s interesting that this module and The Grind Gear both came out in the same year. Both deal with the same theme: tavern/inns that hate the murder hobo customers that they serve. Where The Grinding Gear seemed like a typical adventure, and a bit forced, this adventure module presents the idea in a much more robust manner. It has some strong imagery, strong horror themes, and like most good horror modules (and there are very few of those) it could be swapped out pretty easy to almost any time period or genre. It’s a pretty interesting adventure if your players can get it in to it.

The characters visit an inn. There’s a boisterous crowd inside. A fight starts .. and then all hell breaks loose. The characters, and most of the other people in the inn, have actually entered a cursed inn. The Charred Hag was once the innkeepers wife, loosing her family in a fire to the very customers they served, and after hanging herself and cursing the place now traps and kills groups of adventurers. The inn shows up in various places looking like any normal inn inside and out, and then suddenly things change. The inn exists in three forms: normal, ash, and burning. The normal inn is the one the players first visit. It may reappear several times during the adventure. The ash inn shows the inn after the fire, covered in a soot and ash. The imagery the designer uses to describe it paints the perfect scene of quiet horror. Many of the rooms have different or additional descriptions for when the inn transitions to ash mode. Finally there’s the burning inn. This depicts the inn during the fire that killed the tavern family. along with the chief opponent: The Burning Hag.

There are a series of encounters provided for the normal inn and for the ash inn. The normal inn encounters are essentially foreshadowing. Encounters with the ‘living’ versions of ghosts that may be encountered later, or with other adventuring parties the party may meet later. There are A LOT of these available for the DM, 14 or so, so there’s a wide variety to pick from. This is also where the only railroad is introduced: for the adventure to take place a fight has to start. Several of the encounters encourage a fight to break out. If it doesn’t then an event is provided to make sure one does break out. That essentially starts the adventure and is the only railroad present. Once the party goes in to the ash world there are a different set of encounters provided. These range from ghostly images of past events to encounters with other adventuring parties also trapped in the inn. There’s also 18 or so random wandering encounters that the party can have in ash world. These are great! Packs of mad adventurers tearing living horses to pieces in the stables, or minor hauntings, or chance encounters with potential allies. The entire list of encounters is wonderful; very few feel like complete blow offs. In addition there is a full write up in the back of all of the NPC’s and the factions that the party will or may encounter. I love that kind of content; I think it really helps a DM transform an adventure from Normal to Excellent. Having just a bit of inspiration for NPC interactions between themselves and between the party can do so much to really bring the adventure to life. The way the adventure plays off of stereotypes is nice also: fellow adventuring parties in the inn, the buxom wenches, the stranger in the corner, barroom brawls, etc. We get to really see what impact the murder hobos have on the rest of the world …. but it is in NO way shoved down our throats as a morality play. This reminds me a lot of my best campaigns, where the characters interactions with the world around them had a real and noticeable impact. In this case it was a DIFFERENT set of murder hobos, long ago, that triggered these events.

This is certainly a non-traditional adventure from an OSR standpoint. It is essentially event based, but manages to not railroad the party, for the most part. It plays with common elements from D&D but doesn’t shove a message at the players. It takes places in a dream-like world where the hag is in charge, but again it doesn’t railroad the party because of it. It’s as if the party is trapped in a pocket dimension and must find out how to escape … while occasionally meeting their fellow inmates and jailers.

This is a great adventure. It’s very atmospheric and does horror right. It’s more like a haunted house adventure than a dungeon crawl, but it does haunted house right. It’s not the type of adventure (dungeoncrawls) I generally go looking for but it is of the highest quality. I don’t own/keep many printed modules but if this one was available in a print version I’d have it that way. I strongly suggest you check you check it out.

3 Responses to The Inn of Lost Heroes