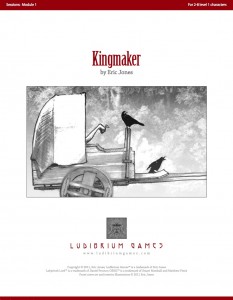 Tragedy has fallen on the Kingdom of Ambarge-the King is dead; long live the King! But the kingdom’s woes have only just begun, for the crown prince, the King’s sole heir, is nowhere to be found. The fate of their kingdom rests on the deeds of a handful of wayward pilgrims that walk a solitary road in a remote land.

Linear! Plot! Great Adventure! Huh .. what!?!? Yuperoo kiddos, it turns out you can do linear, and you can do plot and still have a great old school adventure … for certain definitions of ‘linear’ and ‘plot.’ The party meets a caravan on the road. The master has a sweet gig from some passengers and wants to hire a little extra help. It turns out that the passengers are the deposed prince of a nearby kingdom and his sorcerous mother and that there is a witch and her mercenaries looking for them. This then is the adventure: guard the caravan until it reaches its destination. Simple. And like many of the best adventures, good things come from simple beginnings. Yeah, the plot hook isn’t the best, but compared to most caravan guard missions this adventure is a Picasso.

There are some preset encounters on the road. There are some triggered encounters that go off when something else happens. And then there are the NPC’s. The NPC’s are really what the adventure is built around. There are eight or so that make up the caravan and each gets a good paragraph that describes their demeanor and personality. This is all you need to have a great bunch of NPC interactions during the encounters and during the rest of the trip. They each have motivations and goals. The enemy NPC party gets some descriptions also, although there are only three unique personalities and the remained are generic mercenaries, but even then they get a small write-up on what they want and how they will react to certain situations.

We must now discuss a tricky situation: plot. There are nine pre-set events on the road. A rook flies over. Bandits attacks. Berry bushes. The mercenaries show up to visibly trail the party. The group comes upon a plague cart and a group of locusts attack. Another merchant is met, a dragon shows up to eat a horse, and then finally, the final ford before the caravan comes to its stop. I’ve mentioned all of them so you can make up your own mind if they qualify as plot. These are not odious and could really, in most cases, be counted as pre-rolled wandering monsters. The underlying story, and I use that term loosely, is not enforced on the party. Essentially the story elements show up in three of the events. The rook tells the witch where the party is. Then the witches mercenaries show up visibly trailing the party. Finally, the mercenaries make a final attack at the ford if they haven’t yet been wiped out. So, is it a story/plot/railroad? Well, technically, Yes. It’s also handled very carefully and I don’t feel that at any point the party is forced in to some story line.

Mixed in with these pre-set encounters are some triggered events. For example, the first time the party kills one of the witches men she will send people to parley with the party. Or, what the various caravan members do when the situation becomes dire. Or, perhaps, what happens if the witches situation becomes very dire. These are great. Essentially it expands the motivations and reactions of the NPC’s

This is a great little adventure. The encounters and triggered events are good enough on their own but what really makes them great are the way the various NPC’s react to them. Just about everyone is, in the end, looking out for number one. Like many good dramas the action elements are just ways to encourage social interactions between the actors. There are no interesting magic items, new and interesting monsters, or vast sums of treasure. There is a great adventure in here, and while it technically has a story and railroads the party I don’t think it violates the spirit of the OSR and perhaps even shows how they can be used in a positive way.