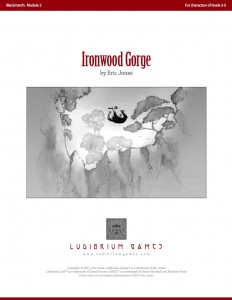 Along the Old North Road lies the lonely Margravate of Blackmarch. Vile orcs, once a memory in the region, have returned in strength, bringing an end to decades of relative calm. The humble garrison of Bleak Tower, an outpost on the march, is likely to be overwhelmed. Who will deliver them?

This is a GREAT module. No, seriously, it is! I cheated ahead and took a quick glance at the other two modules in this series and the designer/publisher, Eric Jones, seems to be able to produce quality work time and again; a rare quality. It doesn’t have that OD&D feel that I prefer but it is an excellent instance of a Basic/1e module and would be an excellent replacement for, say, B2.

The environment is pretty simple: a small outpost on the edge of civilization is now once again threatened by the forces of chaos who are headquartered at a gorge nearby. Sounds a bit familiar eh? But this product does things that never did. The settlement comes alive with the NPCs present, there are lots of events and reactions from the humanoids, the gorge feels like a real place, and the wandering monsters can easily kill the party. All surrounded by a great deal of local color.

There is so much going on in the home base that I’m not sure where or how to start. Basically, the place comes under a light siege just as the party shows up. The inn, outside the tower/keep, gets attacked and probably burned down, while the small settlement flees in to the tower for safety. Light siege might imply too much … raiding attacks may be more correct, except the orcs DO raid the tower once in awhile. This is wonderful, it puts the party right in the thick of things from the beginning and makes the threat from the orcs very much real and tangible, but just something people talk about. It gets better though: the orcs react to the party! If the orcs get their noses bloodied or the party disses them (camps outside the tower, etc) then them come back in greater numbers. This sort of thing extends further. If the party sends for supplies then there’s a good chance the wagons won’t make it in because of the orcs. Also, as the party raids the gorge the orcs will respond by raiding the tower. This is absolutely wonderful. The parties actions have consequences and the humanoids are not just waiting around to be slaughtered in their caves. This sort of back and forth (the Chicago way?) should make this setting absolutely come alive for the party and also almost certainly freak them out as they now have to take the orcs reactions in to account.

The tower environment is great also. First, the maps looks like those maps out of the old MERP supplements, which have always been near and dear to me. Beyond that there are a great selection of rumors and characters and backstory floating around the tower, not all of which are explained. The lord is a vampire. The chamberlain killed the lord. There is a ghost on the upper floors. Etc. The NPC’s in the tower are almost real people and have much more character than most that you find in products. They have goals and motivations. This is a great prompt for the DM to help run the place and make them seem like real people to the party, and to have them react to the parties actions and initiate actions on their own. Once again, this helps bring the setting to life.There’s also a great appendix in the back with some pre-gens in it that could be used as hirelings or as rival adventuring groups to be found in the gorge.Not just stat blocks, these folks each have a sentence or two that does a great job setting up their personality and quirks. To quote one of the entires directly: “Equipment: crowbar and a small sack full of dry mushrooms on which he is able to subsist for long periods. Bogring is a terror in a melee, stabbing furiously with a dagger in each hand. He hears a running ballad of his exploits perpetually in his head.” That’s great stuff for the DM to work with!

The orcs are hanging out in the Ironwood forest at Ironwood Gulch. The forest has 9HD ettercaps in it. It’s got cockatrice in it. It’s got scouts and refugees in it. It’s WONDERFUL! There are challenges the party can’t overcome and people/creatures in the forest that the party can talk to and get a different set of rumors from. There’s lots of animal-like encounters and the humanoids only consist of a couple of types of orc encounters, which doesn’t water down the term ‘monster’ … too much anyway.

The caves in the gorge are where the monsters hang out. Unlike B2 the gorge feels more like a real place. Ledges that run up the sides of the gorge, rock slides triggered by loud noises and fireballs, and a snaking river at the base with a giant pike in it “ready to greet anyone who suspects a concealed passage behind every waterfall.” There are multiple entrances in to the caves: multiple on the right ledge, multiple on the left left ledge, sinkholes at the top of the bluffs … this is great because it not only lends an air of authenticity it also provides the party multiple ways to approach the caves and for the monsters to react in many more ways than a single entrance would allow for. The caves split up in to roughly four regions: North upper, north lower, south upper and south lower. Each has multiple entrances, as previously noted, and many sections of ledge on the outside of the gorge at connected with crude catwalks. The cave maps are well done, with about 50 areas on the upper level and another 30 on the lower, with a small sub-level having a few more. There are a decent number of loops in the maps that allow the monsters to ambush and for the party to sneak and avoid things. There are natural elements, like pools and sinkholes, as well as rough terraces, stairs, status, secret doors, and class pits/deadfalls. The wanderers in the caves are pretty good also. It tends towards scavengers and vermin, with some orcs (their house after all) and potential rival adventurers. I miss adventurers on the wandering table. They seemed to be a mainstay in the past and seemed to trickle out somewhere. I think they add great variety to an adventure, either through roleplaying or a potentially more varied combat. Some of these have notes associated with them which I like even more … zombies that are likely to attack anything, or the rushing sounds of bats, these things liven up what could otherwise be a tedious encounter.

On to the actual encounters. The caves are home to the orc tribe which has a couple of factions within it: the shamans and the warlords. The party can play off the factions if they are very good, and will need to take care of both leaders to end the orc threat. There are also a group of ogres that keep to themselves, but could be hired by the orcs to either protect them from the party or to make a final push on the tower, depending on how things are turning out. Oh, and the ogres like to try to throw small creatures (halflings, etc) from their side of the gorge to the ledge on the other side! An impossible task, but oh so fun to let the party spy a game of this in progress! There are a decent number of natural traps, deadfalls and springy tree spikes (whats a better name for that trap?) for example, to hound the adventurers. There are lots of natural elements as well, such as empty caves with dripstone columns and a twinge of sulfur in the air. Fungi, scavengers, dead adventurers, clefts in the caves, orcs building a trap, a harpy looking for a lair … there’s a wide but intelligent variety of encounters in the caves and many of them change over time. The orcs setting the trap won’t be there next time if the party doesn’t stop them … but the trap will be. Or the harpy looking for a lair will bring back her kin the next day to set u pa lair if the party doesn’t interfere. These are excellent encounters since they give the feeling that time is passing outside of what the party is doing. The party can also find potential allies in a group of lost dwarves hold up in a worked stone section of the caves, cut off from their homeland and rescue. There’s a group of orcs nearby plotting to take them out … and another group nearby with a doppleganger in it who’s up to no good. There’s just SO MUCH going on in here for the party to interact with … not plot, not story, but hooks for the party to take advantage and roleplaying and creative play opportunities. This realizes the full potential of the Caves of Chaos: fewer humanoid varieties but a much richer environment to play in.

There’s a smatterring of new monsters and new magic items and this brings up perhaps the worst part of the products: it uses standard items/creatures. Orcs, ogres, trolls, etc. +1 shields and so on. These new magic items and creatures are nice but are too few and far between. I much prefer more personalization in both my magical and mundane treasure: a bit more description or history and something more unusual than “+1 sword.” I think the additional personalization of magical and mundane treasure add a lot to the game by making the players more attached to the treasure and by making the setting seem less generic to them. New monsters play a similar role in that they keep the game fresh and keep the players on their toes. I still remember that time 30 years ago when I figured out we had to burn the trolls … that can only happen once with trolls but you can reintroduce those same feelings through new monsters with special attacks and special defenses for the party to wonder and freak out about. A decent part of the magic & mystery of D&D comes from those magical item and monster discoveries. Those are, however, relatively minor points. This is a great adventure module and a worthy addition to anyones collection. I don’t keep a lot of what I review but I’ll be keeping this one, even though it does have a 1E feel than the OD&D feel that I’m looking for … it does what it does very very well.