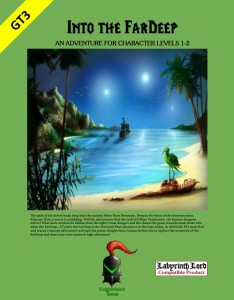 The path of the delver leads deep into the ancient Bitter Root Mountain. Deep in the heart of the dwarven mine, Kharnos Dzin, a secret is unfolding. Will the adventurers find the trail of Gilban Pembrooke, the famous dungeon delver? What dark motives lie hidden from the light? Great dangers and the chance for great rewards await those who enter the FarDeep…

This is the third in a series of three modules that detail the exploration of an old dwarven mine in the search a missing retired adventurer Gilban Pembrooke. It’s also the shortest. At the end of the last module there was a big set-piece battle atop a giant waterfall/chasm underground. This adventure starts with the characters following the chasm/waterfall down to the next part of the dungeon.

Maps are a real problem with this adventure. Whereas the last module has confusing relationships between the maps this module instead doesn’t have many maps. There appears to be be between two and three maps that were left out. The Treasury of the Gods, the Cavern of the Comet, and the relationship between the two don’t seem to be shown anywhere. In addition there are clear references later to hex numbering and what’s in specific hexes, but no hex map to go along with it. I _think_ you can get along without the missing maps but you have to work at things to figure them out and make things work right . I don’t like work. That’s why I review modules. The three maps that are present are very very simple ones. Basically they show a trail running alongside an underground river with maybe six or so numbered areas on each map. One of those is essentially a tactical battle map. There is a teeny tiny regional map as well. I’m talking 1/4 of of one column on a two column page tiny. It’s supposed to show some encounters on a regional map, I think, but I can really only read ‘1’, ‘2’, and ‘3’ on it … there may be other numbers but the map is too small to make out much of ANYTHING on it.

It’s really hard to figure out what’s going on. I’m pretty sure you climb down the waterfall, explore the treasury. Come to the banks of an underground sea and build a raft. Somehow go down a river. Come up on the hex crawl. Explore some islands. off the coast of the hex crawl and then fight pirates. I think. The encounters seem to be few and far between and are mostly straight-up fights. There are some potentially friendly plant people to interact with and some elemental islands with riddles and some interesting stone statues. All of this leads the party to the pirates which they can slaughter and thus rescue Gilban. I really wish I could provide more information, but I;’m not sure I can. Uh … cultists rush at you. And there are some traps in the lands of the plant people. Most of the adventure seems to be made up of some small wandering monster tables that separate the spare ‘wilderness’ encounters. Of course, without a map, scale OR EVEN AN ACTUAL TABLE you’re left with a heading titled: Random Monsters, with a few entries under it. There’s another good seven or so magical items presented, along with a few new monsters of no special note. The magic items are nice though, I appreciate seeing them. I like the stange and unusual since I feel it lends an air of magic and mystery to a game. A good example are ‘Tear of Palandria’, a tiny fragment of of moon of Palandria. It’s glows blue-white in the presence of the cultists and causes them pain. That’s nice, as is the bracelet that grows in to a shield and the Pitcher of the Gods.

I think this is supposed to be an incredible journey in a fantastic underworld environment. The missing maps and a generally disorganized layout make it very hard though to even figure out what is going on.