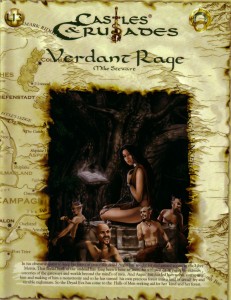 Druids: Hack ’em on sight or kill them while they sleep? These amoral guys seem to be mainstays of wilderness adventures. Who can blame a DM for throwing a few in?! Just like a doppleganger, you never know when that ‘friendly’ druid is going to hack you down at night and claim that the ‘balance needed to be restored.’

This is a small wilderness adventure with 18 wilderness encounters and ten more in the druids tree. The hook is lame: a dryad shows up in town and begs for help, Seems the local druid in the nearby forest has gone mad after reading a book and is now ‘very bad to everyone.’ This being a typically ruled D&D town, the local lord doesn’t believe her and runs her out. Oh, well, until he calls on the party to go stop the druid because he’s too busy. Oh, the Dryad is being escorted out of town my four female guards, you know, just in case she tries to pull any of her dryad tricks. My problem here is the overuse of the usual tropes and the inclusion of the magical economy elements, namely, that the local lord has a contingent of female guards. This very much smacks of 2e and laziness in design. You have to be a do-gooder to want to go on this adventure. Then again, it’s only a hook and the DM can replace it.

The wilderness encounters are mostly an excuse for the party to mix it up with the typical sylvan creatures: pixies, nymphs, satyrs, treants, etc. The good and shy creatures are generally infected with something that makes them insane and evil. This turns what could be some very unusual motivations and interactions in to a straight hack fest. There are generally no allies to be found in the forest, the sylvan creatures being so insular that, even though they know the druid is evil they won’t do anything to help the party. Everything comes off as a little unoriginal and straight-forward. Move from place to place and hack the forest dweller until you find the tree. Then move around the tree from place to place killing people. There’s some graves to explore, and a shipwreck that can provide a little variety, however there’s a distinct lack of interesting things to explore or play with in the forest.

The magic items are of the typical boring book variety: +3 scimitar, Deck of Many Things, Liber Mortis, etc. Wait?!?! What??!?! Yup, there’s a Deck and an artifact level book. So, yeah, the mundane treasure is pretty boring, 200 sp and 50gp in a chest, for example. The magic treasure could be overpowering and a campaign-killer is the DM is not ready for it. There are a couple of new monsters in the back, lesser undead, bullywugs, and so on. Nothing too interesting.

The starting hamlet is the most interesting part of the booklet. There are eight or so places detailed and most of them have some quirky inhabitants or things associated with them. MARKOONNEN THE MIGHTY is the local wizard, who’s in to letting everyone know how mighty he is. The blacksmith has a habit of shoddy work and the tavern has a MILF/daughter love triangle waiting to happen, with a jealous and burly husband/father waiting to crack some heads when it does happen. It’s hard to justify the module based just on this.

This feels like a very basic adventure. The wilderness exploration element is going to put it above many other, linear, adventurers, however it doesn’t really offer much in the way of new and interesting content or ideas. It feels a lot like something that a you might throw together in a few hours the day before a game. Clearly, a lot of effort went in to it, but it doesn’t feel like polished or original effort.