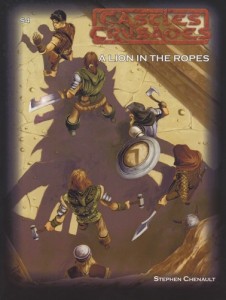 This is a VERY well done non-traditional module, at least for the OSR.

During a terrible downpour the party seeks shelter in a small village they come across. The village is locked up tight and refuses entry to the players, sending them to a small church nearby. There the players are met, fed, and bed down. While there they hear of a series of terrible killings that have plagued this area. Locals suspect a dreaded Charon Fiend is responsible. The local manor lord, once a hero, is now too feeble to do much more than sleep. The party, presumably, helps track down the killer. Uh … if they do if they want to go on an adventure tonight, anyway.

This module is a strange beast. It’s probably a mystery/investigation module, since the party has to track down what is killing the villagers and stop it. These sorts of adventures are VERY difficult to pull off at higher levels. Mid-level PC’s usually have access to spells that DESTROY secrets. Find traps, find the path, ESP, Augery, etc: it’s impossible to keep a secret from a mid-level party. This is on purpose of course; dungeons & tombs get much more deadly from their traps at this level of play and the party is expected to use spells to find them and get past them. Unfortunately this makes it VERY hard to get away with murder/your-dastardly-plot. Except of course when the party is low level and doesn’t yet have access to those spells. Thus in this module we get the layers investigating the murders of the villagers. Some night watches and tracking soon leads to a glimpse of the beast and it’s lair, where, it’s finally revealed that .. it’s actually an escaped lion still in his head stock with ropes attached. A stupid ass villager mistook it for the dreaded Charon Fiend. Hmmm, and hey, didn’t the party hear about an escaped lion from a local traveling circus they met beforehand?

That evening a band of humanoid raiders attack the villagers. Inspired by the parties heroics the villagers beat them back and the humanoids attack the tower of the decrepit manor lord. The players head off to lift the siege. Returning to their church lodgings they find their friend killed … The lion was not responsible for the killings, but rather some unquiet dead. The players hack them and, hopefully, put them to rest. Game over.

While there is a timeline and some misdirection I can’t really point to this as being a railroad. There are a great many things in the module which add to an overall atmosphere of dread and melancholy, combined with triumph and loss. I’m not sure I’ve ever seen another module handle the issues so well. The party triumphs over the lion and the villagers, inspired, put up a hellacious defense when the raiders attack. This is a nice little bit; it makes the characters actions that day seem to have beyond the simple act of slaying an escaped circus lion. That’s the kind of thing that good campaigns are built upon. The humanoid raiders move on to the old mans tower, which is merely a diversion to allow the unquiet dead to kill the parties ‘friend’ back at the church. When the party returns the dead possess the statues of saints and even a figure from a stained glass window to attack the party. These dead are prisoners abandoned and left to die, unburied, and now can’t rest. Occasionally you’ll run in to a module where the dead rise and cause trouble because of their murder, or not being buried, but this module does a much better job at describing their plight that I’ve seen before. The people and monsters in this adventure act like real real people could, or a monster may, instead of just being random beings of destruction for the party to *hack* for gold and xp.

I do have a few suggestions if you should run this. First, there’s a traveling circus that starts the adventure. I HATE these things; they always seem out of place in D&D modules and there’s always a reason for them to be there. I suggest that, as a player, anytime you meet a circus you immediately state “I kill everyone in the circus.” No matter how much fuss it causes you can be certain that you’ve just saved yourself some trouble. In this instance the circus is innocent of the usual crimes against humanity, however they do provide a clue: that a lion has escaped. There are now two possible outcomes: the party will be clueless because they never pay attention to anything anyway, or, they will immediately chime, in chorus “it’s the lion” when confronted by the Charon Fiend story. MAYBE with a little prep work a few sessions before this one you can get the circus clue in, otherwise it’s too much of a risk of ruining the adventure, IMO. My wife is a MASTER of this kind of stuff when she runs a game. Clues are dropped weeks if not MONTHS in advance. If gives the campaign world a real sense of continuity; things seem to make sense when what’s happened before has meaning to whats currently going on.

Then there’s also the issue with the humanoids attacking the manor lords tower. I have issues with this on two points. First: Why humanoids? Why not just human bandits? You don’t have to have orcs and goblins in an adventure to make it a fantasy. Human bandits generally work just as well if not better. This way there’s a real sense of anxiety when the party meets actual ‘monsters.’ Don’t dilute the word by just tossing some throw-away humanoids at the party. Second, this is really just a diversion to get the party out of the church so the unquiet dead can make a kill. And by ‘make a kill’ I mean, of course, horrifically murder the monk they’ve made friends and bonded with. I know this is a classic technique but man, it gets old. The party ends up feeling like those guys in the WW2 movies: Nah replacement kid, I don’t wanna know your name, you’re just gonna get bumped off by the Jerry’s anyway. Relatives, wives, girlfriends, kindly innkeeps; anyone kind or memorable gets killed off. I don’t have a solution here. In that same vein, the characters investigate the murders because they are the Good Guys. That’s not the strongest hook but it is probably the most used one. You’ll have to come up with something else.

Finally, the DM is going to want to take a close look at the various people in the villages. They are not really described very well, so a little work to develop some NPC backgrounds, quirks and the like should go a long way in helping to being the villages and region to life. When the villagers make their heroic stand against the raiders it’s going to help if the party can put a name and face to them. This adventure s heavy on atmosphere so having the villagers be real people will go a long way to making it feel more real.

This is a quiet little adventure with a strange feel to it. It reminds me a lot of the same feeling I got from Bill Barsh/Pacesetter Games ‘The Thing in the Valley.’ … I’m not sure what that feeling is. A kind of slow burn? Pacing and atmosphere is probably more correct. It’s almost like the feeling I got from of the Ars Magica supplements, especially ‘A Winters Tale.’ A kind of melancholy perhaps. This adventure is not breaking any new ground, is a little wordy in places, has a boring hook, and needs more village/region data personality. It is also one of the best horror fantasy adventurers produced and is worth having.