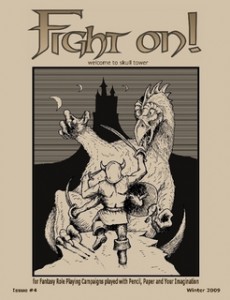 I’m working my way through the various issues of FIght On! magazine, reviewing the adventures. The rest of the magazine tends to be chock full of great thing from the OSR and feels a lot like the early Dragon & White Dwarf.

House of the Axe
by Calithena
4th-10th Level
Arduin!

This adventure details the ground and upper story of a ruined home of a dead wizard, along with the basement and dungeon level. There are about 65 or so encounters in all, with most being in the basement and ground floors. The adventure has that quirky and idiosyncratic feel that I’m looking for. All of the rooms contain a pretty lengthy description and a section of boxed text, neither of which I prefer, however nearly every room has something interesting going on. In this way it very much resembles Tegal Manor. There’s an old ghost who floats around with a random chance of screwing with the party. There are many and varied In Media Res rooms where the party stumbles upon a recently slain body (or bodies.) There’s a great assortment of new baddies to learn about that should keep the party on its toes. The magic items, and to a certain extent the mundane treasure, all have a pretty good description attached to them. In fact the most valuable item in the adventure will only be obvious to smart players, exactly the way things should be. This is a great adventure with perhaps three things that could be better. The textual items are a bit long for my tastes; I’ll need some strong highlighting to run this. The second floor is also a little too gimmicky for my tastes. The core gonzo element of the floor is a little too … direct? for my tastes. Finally there is not really enough interaction with the creatures, other than to hack them: the intelligent beings jump to attack immediately instead of some much more interesting party interaction. Otherwise the party is going to have a great time playing the various rooms and getting themselves killed over and over again, in the grand tradition of Tegal.

This adventure also appears, somewhat revised, the Raggi module Death, Frost, Doom. Raggi does a good job of invoking a certain type of feel in his work. A kind of weird horror that not too many others, if any, have captured. They also tend to be linear deathtraps. This adventure is no exception. The party encounters a ruined tower in the middle of an idyllic glade. Properly preped, they know that tower holds something. There are just five levels to the tower, one room per level, and only four of them really come in to play, along with a special door and the doors guardian. The adventure is short, deadly, and has no treasure to speak of. It’s more of a lesson, and the author admits as much, that not every place the party explores is rewarding.
Arcane Vault of Isis
by Matthew Riedel
High to very-high level party

This is a linear dungeon with 18 or so encounters. The party hears of a strange stone structure that has been revealed by a recent sandstorm and plunges in to explore the depths underneath it. The dungeon is pretty relentlessly linear and presents several other tropes that I generally have problems with. The undisturbed tomb has living creatures in it. They don’t pop out of stasis, but it still strikes me as being out place. It’s full of constructs that attack relentlessly. What else can you put in a tomb except for undead? That’s why tomb explorations tend to be boring as hell. It’s all set piece traps and constructs and undead. It has an egyptian theme and a magnet trap, both of which are turn off for me but may work out better for you. The party ends up fighting a dragon and maybe a stasis wizard and maybe a band of priests that show up. I found the whole thing very unsatisfying, but then again I’m looking for a lot more whimsy in mu dungeons and VERY much don’t like linear tomb crawls.
Fungoid Gardens of the Bone Sorcerer
by Geoffrey McKinney
Carcosa

This section of nine pages details some points of interest in hex 2005 of Carcosa map one. “Carcosa” is all you really need to know though. It’s wild, it’s wooly, it batshit crazy and it’s wonderful, although not quite the whimsical that I prefer. The hex has a scientific outpost for aliens, a group of barbarians that ride dinosaurs and hunt sorcerers, and assorted other strangeness. The core of the text is taken up by describing the 27 room cave system of the Bone Sorcerer. It’s a cave system with a map that adequate although without any real interesting features. The encounters, however, will be remembered for a long time to come for any players that stumble through here. A lake of green slime, caves of bones, giant fungus forests, chthonic beasties, and a certain moral ambiguity in its presentation should lead the party in to some interesting hijinks. You know, Gamma World has always suffered a bit from the lack of a campaign setting. ASE1 and Carcosa could be the setting GW needs.

The Darkness Beneath Level 4: The Mysterious Crystal Hemisphere
by James Maliszewski
Level 4 characters

This is level 4 of the community megadungeon, and by far the weakest. While the previous two entries have been stellar this one lies somewhere on the lower end of mediocre. The eleven pages describe 50 or so encounter areas, however the first two pages are full of background. That’s probably the first indication in any product that its going to be problematic for me. Only Stonhell comes to mind as a product that had a longish introduction and didn’t disappoint. Then again, it had 20 or so maps so it’s introduction size, relative to the product, was short. Two pages of introduction for one small dungeon level …. that’s not short. The idea is that a portion of an alien spaceship has materialized inside a larger set of caverns. This divides the level in to caverns, spaceship, and “stabilizing chambers” where the materialization is not quite complete. Nice idea. Different wandering monster tables are given for each area however they are all over the place. Trolls, dopplegangers, and owlbears in the stabilizing portions with giant ticks, cave bears and spiders in the caverns. The differentiation in creatures makes no sense; it just seems like it was randomly thrown together. The non-spaceship parts of the map are generally very simple, with a lot of linearity. It’s also confusing. Hand drawn is a nice touch but it needs shading to denote solid spaces from passages. The spaceship has a little more variety but again the lack of shading makes the map confusing. The chambers themselves are … well, boring. There’s just not much going on. The cavern creatures attack on sight, and viscously, with only a couple of exceptions. This in spite of their troubles with the spaceship. There’s not enough factions at play in this space, which is a lost opportunity. The players could be teaming up with the trogs or trolls or even the spaceship to work against the others or play both sides of the street. The room descriptions are more verbose than I would prefer and seem devoid of any sparks. Standard giant spider room. Standard beetle room. Standard collapsed chamber. Oh, there is a bad save or die trap that seems to come out of nowhere. It should have had some kind of warning, bodies or bones or something. The aliens in the ship are just mind flayers in uniforms, which brings to mind the Barrier Peaks illustration; perhaps that was the inspiration. The adventure is probably too high for a party of 4ths, given the frequency & high numbers of 6HD creatures sent against the party by the ship. This level is supposed to expand on the brain parasite found on Level 3 in the Crab Spawning Grounds, but it does a poor job. The mystery and bizarreness is removed. This feels too much like standard high fantasy “explanation” based exploring.