Fight On #5 – Warrens of the Troglodytes 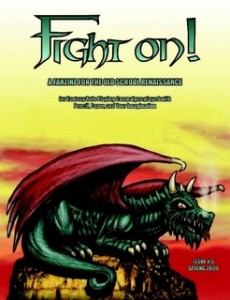 I’m working my way through reviewing the adventures in Fight On! magazine. The magazine itself is great and is chock full of ideas that should your creative juices flowing. Check it out!
The Tomb of Ixtandraz
by Lee Barber
4th-6th Level Characters

This is an interesting little dungeon. It doesn’t have as much meat as I’d normally prefer, only 17 rooms or so. This is generally not enough to get something interesting going that can sustain play. This one though is a little different and appeals to me in an unusual way. It may be because it’s in a burial mound; I’m SUCH a sucker for those. It starts gimmicky enough: the tomb of the archmage Ixtandraz has been found and the party gets ahold of a map. In it’s swampy location the party comes upon a lizardmen village at the base of the mound. Inside is a wonderful assortment of oddity and an excellent selection of OSR elements. The map is … hard to categorize. Despite having only 17 rooms AND being a burial complex, it manages to be interesting. Lots of little features, corridors running over others, flooded sections, interesting secret doors, mini-tunnels, etc. I was pretty pleased with the variety the map presented. The rooms are nicely done as well. Statues that turn and open secret doors, clues in paintings, small environmental modifiers to combat from rubble & water and so on. There’s a goofy table of wine bottle effects which include things like ‘coated in blueberry jelly’ and ‘STR reduced by half for 2d10 rounds.’ I LOVE it when dungeon have things for the party to play with and the wine bottles more than satisfy. There’s also a goofy little ghost cat named Norbert that could become a hanger-on. Why don’t more published adventures have this originality? This is the kind of stuff that a campaign thrives on and I’m continually amazed more of it doesn’t show up in print. It doesn’t appear that any of the monsters, except maybe the lizardmen, are standard; everything has a little twist. I like this because it keeps the monsters scary; the players never know what to expect. The magic items are also an interesting allotment. They are all non-standard in some way, even if it’s just a little adjustment like “of returning” added on to a magic weapon. No generic crap in this dungeon! This would make an excellent little adventure for an evening of play or a con; it’s a great introduction to elements of the OSR.
Black Blood
by Gabor Lux
3rd level characters

RedRum! REDRUM!
This is a kind of investigatory adventure set in an old home that starts with an excellent hook. the party, having arrived at a major city by ship, is greeted by deserted streets. Well, except for a detachment of the city guard which informs them that all three of the city gods have issued the same omen: the strangers who arrive this evening will destroy the town and anyone who succors them. A bribe is exchanged and the ships captain anchors in the harbor … until getting second thoughts about “succor” and kicks the party off the ship. In the empty streets of the town they meet a strange woman covered in blood with a dagger and a wild look in her eyes. This leads to the Villa of Severius and it’s 42 or so rooms of adventure. The hook is excellent and will certainly lead to some great roleplaying opportunities. The villa is two stories with two basements and the maps interesting enough to sustain play. In the grandest tradition of Weird Fiction, the house proper is will be mostly an investigation as the party travels from room to room. This builds from emptiness, to clues, to gruesome body finds and finally to creatures and more gruesomeness as the party enters the basement levels. This would probably make a great Call of Cthulhu adventure and could be dropped in to almost any other game system or time. To me that means it works for what it’s trying to do: create a weird fantasy adventure. The only problem is perhaps that the NPC along for the ride, which adds so much flavor, is likely to get massacred or left behind early on by the party. The NPC is critical not only for raising tension but also for a single secret door. Without finding that door the party will be lost. There’s not a lot of magic items in this but what there is nicely done and fits the tone of the adventure. For example, a silver cross with a few charges that allows the holder to turn undead as a cleric. The creatures are either nicely weird or undead, both strange and new and good ol zombies. This would make an excellent halloween/christmas adventure and/or serve as a nice change of pace or interlude, although there’s a very real chance of death: the wizard behind things is mad an 9th level. Guile over brawn gang!

This isn’t really an adventure, but rather a brief encounter in the wilderness. The party is stopped by some orcs who plead with them to rescue their children. The kids were locked in their cave after a red giant came crashing in and kicked them out. The feverish fire giant s really the only opponent, and a smart party will attempt to ignore/bypass him. This tactic only has a 1 in 6 chance of failing, unless the party is full of idiots. The rest of the small seven room cave complex only has one surprise in it.

The Barrow of Therex
by Erin Bisson
1st level characters

This small five room barrow that is in the process of being looted by goblins. The portion they haven’t reached yet contain a few undead. There is some nice historical flavor to the barrow with enough fantasy to make it interesting, especially in the grave gifts category. The few magic items are both interesting, detailed, and non-standard. This is a nice little adventure for a 1st level hex-crawl encounter.
The Darkness Beneath Level 2 – Warrens of the Troglodytes
by Calithena and D. Bowman
Level 1-5 characters, depending on GM cruelty/kindness

I’ve loved two of the three previous levels of this community megadungeon and was happy to see the trogs finally get their level. These are caverns and the map that supports them is windy and full of natural features. While there are several small loops present there is not enough alternate passages for my tastes. I wish more were done with the multiple elevations that come from the numerous chasms, sinkholes, slopes, and terraces that are present. The 40 encounters are supplemented with two small sub-levels that add an additional eleven or so encounters to the mix. The core of the encounters on the this level are going to be with the trogs, in their various forms. And therein lies this levels largest fault: it feels RELENTLESSLY trog. It’s not, but it can feel that way. It’s actually a nice cavern system with some native inhabitants. Gas Spores. Giant Badgers, a Dragon, etc. There’s also a major ally to be found: the Mole Men! These guys are essentially co-inhabitants and are completely random in when they will appear. I LOVE the mole men, especially as potential, and very weak, allies. There’s a good assortment of ‘creatures in the pit’ and ‘fungus gods’ as well, but the whole ‘trogs everywhere’ feel is hard to escape. I also wish the magic items had some more detail. While there is some variety in them, there are also too many “+1 spear” and even one instance of “they all have +2 daggers”. The later is a travesty in my eyes. Overall a decent above-average level but not enough interesting things in the “not creatures” category. Of course, an above-average Fight On! adventure like this is also better than at least 80% of other modules, and it’s quite a bit better than the Mysterious Crystal Hemisphere in the last issue.

5 Responses to Fight On #5 – Warrens of the Troglodytes