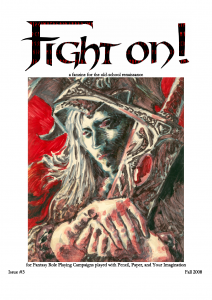 I’m working my way through Fight On! magazine reviewing the adventurers. I’m skipping over the rest of the magazine, and the hex crawlish sorts of things. The magazine in general is very good and compares well to the early days of Dragon and White Dwarf.  The general content is excellent. This issue also includes several regional/hex description sections and level 5 of Hell by the same author who presented the first four levels in the 1980 Judge’s Guild supplement Inferno.

The Darkness Beneath, Level3 – Spawning Grounds of the Crab-Men

This level won first prize in the Fight On! adventure contest and now seems to be expanding it’s reach. Level 1 appeared in issue #2 and Level 2 claims to be appearing in issue #4. This level has SO much going in it’s 13 or 14 pages that it’s going to be hard to mention how it all interacts. First there’s the Crab-Men. These are primitive cavemen who worship a demon crab and use this level for their bizarre rites. Ceremonies which turn them in to various crab monstrosities. A large part of the level is devoted to them and the various types of ‘real’ crabs which hang about as well. But wait, That’s not all! Also lurking about the crab section are an ‘insane’ crab monstrosity/humanoid named Crazy Clonk. He’s under guard by crab men who release him upon intruders, but only reluctantly because he’s a pain to get back in his pen. You see, he picked up a glowing-red sword which is now dominating him … Oh, and the giant crabs that roam around are really just animals and can turn on their crab-men handlers at any moment. DId I mention the elderly hill giant whose cave reeks of dead crabs and butter? He moved hear in order to enjoy his favorite food, hot buttery crab, in his retirement and offers a bounty for each the party brings to him. That’s the kind of quirky good natured fun that a lot of modern products are missing. Note also how various factions of the dungeon are presented. Not every encounter has to turn in to a fight: the party can talk to the giant, manipulate the giants crabs or the ego-dominated Clonk. All of that is just in one section of the dungeon. There are other sections with a crazed sorcerer and his Speci-Men, which could easily turn in to a great recurring villain because of his twist. That section has factions as well, with hive-minds, alien intelligences, and sympathetic ‘monsters’ who have their own goals and motivations. This wonderful environment is supported by an interesting map with 54 or so encounters that has several distinct feels to it, from caverns to seemingly inaccessible areas to standard dungeon halls. The wanderers generally support this same environment, with a variety of special events and encounters offered to make the journey more interesting, such as trog raiding parties, loose experiments, and battles in progress. The magic items and treasures fall in to either a mundane category or a Kick Ass Flavor category; it would have been nice to see more individualization in all of the treasures. The textual descriptions are a bit long, with eight or so rooms per page described each with a longish paragraph. This is a little longer then I’d like to see because I find that length hard to pick apart during play. It’s also nothing that a highlighter can’t fix. In the best tradition of module writing a great deal of the history and background of the level comes out in these descriptions which IS the correct way to present this information. This level fits in well with the overall megadungeon environment and is a rich and full flavored (buttery flavored?) place to adventure in. It’s one of the best efforts of the OSR and I strongly recommend it