Demonspore – The Secret of the Shrooms 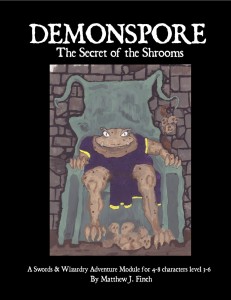 Established in the subterranean cyst left by their dead god, a zealot band of Shrooms, a race known for bizarre projects and subtle objectives, have now been working for decades on the strangest task in their strange history.      … They are growing themselves a new god.

Yeeeehaw! This is enough alien and bizarre stuff in these modules to drive a bucket of eels through! This is an OSR module done right. I love it!

This is one awesome ride in to the idiosyncratic depths of the OSR. The encounters and environments in this module are unlike those that many of us have to come expect, even i nan OSR product. They are, however, the very core of what I consider to be the OSR. The modules contains two adventures: Throne of the Toad-King and Stone Cyst of the Shroom Priests. Throne can be used as a lead-in to the Stone Cyst or they can be easily used as stand-alone pieces. Both modules have some pretty tenuous hooks; we’re talking G1/G2 territory here. There’s the briefest of ideas of how the party could stumble upon the halls of the Toad-King and then a brief note in the adventure that can link it up to the Stone Cyst, much in the same way G1 had a small note in it that linked it to G2. There’s a slight reliance on rather generic magic items that’s a toad disappointing. (Get it! Get it! Toad! Hahahahahaha!) There are more than a few freaky items to play with, but there’s also a pretty large quantity of mundane magic. Maybe those items make the freaky stuff all the more freaky, in contrast? Maybe, but I don’t think so. Other than those two points the modules are as close to my platonic ideal of OSR as I’ve seen.

The halls of the Toad-King have about 43 encounters in them. They are situated in a kind of natural stopping point in the underground world and so the toads are somewhat used to getting visitors. In fact, the party can pay the sentries and stay for up to a week in the visitors quarters! Unfortunately the once-proud race of the toad people has fallen in to Chaos. Our toad friends are being corrupted. The party could approach this as a hack-fest or try to loot the place while they are visiting. They can also get approached by a (friend?) in the halls who wants them to look in to something for him. This is a great set up; the party is not forced in to a linear combat of room after room, they can instead venture around “peacefully” and get themselves in over their head! Perfect! I don’t usually like humanoids but I’m making an exception with the toads. They are given enough style and depth that they actually feel like distinct people. They go about their lives with their buckets of eels or fish guts and are pretty close to having a real culture presented; without the Harn-like exposition that is generally provided by authors trying to do this. The detail of the toads is mainly presented in the encounter text, which is exactly where I want it. There are a couple of pages in the beginning that describe the general lay of the land in the halls, but no real lengthy exposition to suffer through. There’s also an excellent wandering monster table. A great many could be described as events instead of monsters, and combat is seldom forced. They are very interesting though in a way that lets the DM expand on the nuggets provided to bring the encounter to life. That’s exactly what I’m looking for in a wandering table.

The halls have multiple opportunities for the party to find some allies. This can add heaps of fun to a dunegoncrawl: rescuing prisoners, intrigue with people you may not be able to trust, and mini-quests to gain allies. This is yet another example of “Stuff to do in a dungeon besides kill things.” The more of that “stuff” then the more likely it is that the adventure is a good one. There always has to be the threat of the Wrath of the Dungeon coming down on the parties heads, and thus the tension of the party trying not to screw things up enough to make that happen while grabbing as much as they can. Along those lines there are also a pretty decent amount of things for the group to do while in the dungeon. Lot’s of things to talk to and, notably, an alchemy lab for the players to push their luck in. “I drink from the fountain. What happens?” should be a staple of every OSR adventure. The map is better than average with a couple of different options to choose from at any given point. In addition it has a lot of variety: a lake, river, tunnels, and so on. It’s quite a bit more interesting than almost every other map and almost qualifies as a good megadungeon map. There are several new monsters besides the toad-people, including a pretty cool toad hydra. I don’t usually comment on art, however Jason Shultis did the interior art on tis and it is PERFECT. I can’t image the creatures any other way.

The second adventure, Stone Cyst of the Shroom Priests, takes all of the good qualities from Toad-King and amps them up. The map is made much better by adding a third dimension to it. It’s also larger, containing about a hundred rooms/encounter areas. There are more new monsters, more weird things to play with, and the weirdness/whimsy dial is turned up to 11. Just a description of the main shaft, a weird greenish lava lamp like environment, is more of an evocative environment than most people will have seen in a published product. Once you add in the Green Brains, the Shrooms proper, and all of their various fungi and other creations … wow, the party is going to have a majorly good time in this.

This is one of the finest products yet released for the OSR. Go buy it now.

15 Responses to Demonspore – The Secret of the Shrooms