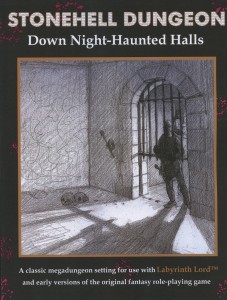 Beware All Who Enter
These Benighted Halls of Stone.
Within Lies No Solace
Nor Any Comforts of Home.
Toiling For Our Crimes
We Must Dig Where We Dwell,
With No Freedom or Mercy
In Our Vast Stony Hell.

-Inscription over the entrance of Stonehell Dungeon

This is certainly one of the best works to come out of the OSR. It’s a megadungeon and it’s close to perfect. The dungeon was once a prison and now, hundreds of years later, has evolved in to something else. The place _feels_ like it has history. There’s about an eight page section in the beginning that describes the history of the dungeon, an overview of what’s going on today, and how to integrate it in to a campaign. I wasn’t that excited when I first saw the length however I must admit that it works. The concept of a megadungeon has always been a bit implausible and now 40 years later we have to examine everything through the lens of what has come before. This one works. The history makes sense. Not just enough to get by but enough to make Stonehell feel like a real place and completely plausible. This extends as well to the creatures found within the dungeon. Not only the vermin and oozes but also all of the other creatures. Why are there cannibal berserkers? Because they are the descendants of the former inmates. Why are there kobolds? Because they were the former slaves and ingratiate themselves as servants to whoever is in charge. Why are there undead? The tombs of the former dead inmates. Why are there hobgoblins? They are setting up an advance base in order to take over the dungeon and invade the human lands. Why are there ogres? They are bachelors who’ve come up from a tribe lower down, having a great time drinking, gambling, working out, and living a life free of their pesky ‘betters.’ My clumsy descriptions don’t begin to do justice to the realism and plausibility of the humanoids situations. The key point here is that everything works together.

I should talk a little about the general layout. There are six levels presented if the surface ruins are included. Each level has two pages of introduction most of which is made up of a large map. There’s also a small introduction and a list of monster stats for the creatures that appear on that level. The map is divided up in to four sections and each section is then detailed separately. Each of these section also has a two page introduction which details what’s going on in that section. Then there are two pages which contain a large map of that section, a wandering monster table, and the encounter descriptions for that section of the dungeon. This is a near perfect format. It allows the encounter descriptions to be short and to the point. The entire thing is very similar to the one-page dungeon format. Just to be clear, each level is composed of four full maps, each maps having 40 or so keyed encounters on it, for a total of about 150 encounters per level. This takes place on each of the six levels. And that’s just the first half of the megadungeon! There’s supposed to be another booklet that details the next six! The maps themselves are wonderfully complex. Lots of cool design features, lots of stairs up and down, slides and pits that deposit you on different levels, and so forth. There’s lots and lots of room for the party to ambush and be ambushed. I LOVE these sorts of maps. They all have a different feel than the others as well, which is a pretty major accomplishment given the quantity.

The encounters are excellent. There are lots of things to play with in the dungeon, potions and labs and temples and other things to get in to trouble with. The creatures are all  generally doing something when encountered. Getting ready to go raiding, beefing up the “larder”, and so on. Oh, there are guard posts and the like as well, however the encounters are all done in such a way as to bring them, and the dungeon, to life. You really get the feeling that this is not just some static place but is a real living and breathing environment. Something like “Southern Guard post: Signs of regular traffic. Smells of cooking. There’s a 50% chance that the guards in room #25 are watching this area.” or “Dank Room: Mildew on walls; musty stench in the air; broken furniture sprouting sickly mushrooms. Empty.” These encounter descriptions are short (remember, you have to fit 40 or so, along with  nice large map and wandering monster table on two pages!) but do a great job of providing the DM with just enough detail to set the scene. This is EXACTLY what I am looking for. Just enough detail to get me going so I can run a good room, I can fill in the rest.

There are factions GALORE in this place. The party will routinely run in to the kobolds, who can be a great source of information. There’s an evil guy in the crypts who really just wants to be left alone. There’s also some evil acolytes in the crypts who are looking for the evil guy because they think he’s their leader. He’s hiding form them and leading them in to traps. There’s goblins on the surface who are hiding out and sulking because their tribe was massacred by orcs. There are HUGE numbers of creatures to talk to, hire, and get in to trouble with, and most of them are looking to get one over on almost everyone else. This is great because it provides so much more depth to a dungeon, the parties not limited by just kicking in the door and hacking the occupants. There’s also a wealth of new creatures, magic items, and spells. These are detailed in the two page intro for each map, so it puts the data right where you need it.

If I were to nitpick this I’d say things could be improved in four areas. First, I would have liked it had the monsters been bolded or highlighted in some way in the encounter descriptions. This would help me pick things out much more easily. As it is I would probably need to take a highlighter to the encounters in the book. Secondly, although there is a great deal of new magic items there are also a great quantity of “book” items. A little personalization in this areas as well as the gem/jewelry area would be nice. There are space constraints, so perhaps I should be content to use my own tables to work up some personalized descriptions. [I do this ahead of time for gems & jewelry. I print off a page of gem descriptions and another of jewelry descriptions and then just mark a description off the list when the party find a “50gp gem”.] Thirdly, more map notes would be great. If the guys 50′ down the corridor in the next room are noisy then a note on the map, something like “#18/Fighting” would be helpful to clue clue the party in on environmental/sound/light issues in nearby areas. Finally the entire place could use just a bit more whimsy. This may be because I’m just coming off of Demonspore, but a few more things that are truly freaky and whimsical would add a nice air to the place also. Maybe we’ll see a machine level or the faerie dragon level on the second book?

This is a monumental book and sure to be a classic. Pick it up. You won’t be sorry.