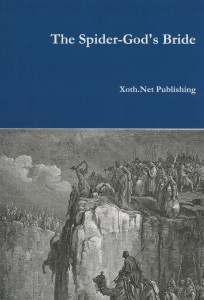 Enter the City of Stone and slay the high priest of Jul-Juggah! Plunder the ancient gold of Namthu! Seek the fabled jewel of Khadim Bey, but beware the nameless horrors of the Al-Khazi desert! Fight the dread adepts of the ape-god, or succumb to the pleasures of the Moon-Juice of Yaatana! Or perhaps you will perish by the curses of Ur-Kharra, the long-dead sorcerer-king of Elder Kuth?

A 200-page booklet full of Swords & Sorcery with a mesopotamian flair. It’s hard to get through at times, but delivers as a solid genre book … if you’re definition is the same as the designers.

I don’t review supplements, yet anyway. I don’t find what they present to be interesting, generally. This product is essentially a supplement dealing with a particular style of swords & sorcery play. I bought it because it because I thought it contained ten adventures. It does … however they are … different. The book is large, 200 pages, and that makes it difficult for me to work with. These days I’m all about simplicity and “small” and “lay flat” are highly valuable to me. Yeah, content is still king but marginal content gets rapidly downgraded when it’s a pain for me to use. This is almost certainly unfair to the designer. It’s akin to a movie reviewer telling you they didn’t like a movie because there were no furry futa’s with balloons in it. In the world of movie reviews you can just go read a reviewer. In this genre though … well, I hope you like furry futa’s with balloons.

The first forty or so pages of this product describe how to run a d20 game with a swords & sorcery feel to it. Human-centric, low magic but vile magic, monstrous monsters and the like. It also presents an overview of a campaign setting that has a decidedly mesopotamian/sultanate air to it. That certainly IS a part of the swords & sorcery trope but not my go to imagery. This carries through to the ten adventurers and is more than little off-putting for my tastes. I think vile priests in dense swamps with giant snakes & lizards and some gorean art mixed in. It doesn’t help that the writing style is more than a little dry. Combined with the art I get the sense I’m reading an academic journal. That’s not the evocative style I’m looking for. It also doesn’t help that there are no maps in the book, you have to go download them. I’m supportive of supplemental material on the web however once day the xoth.net website is going to go down forever and there will be no more maps. It’s also confusing as hell until you figure out the maps are online. Yeah, You’re gonna photocopy them anyway so having them online makes sense, but it’s confusing as hell. The

If you work at it you can get past many of these issues and find some nuggets. What’s presented in the ten adventures are some site-based encounters, but not in the way that term is generally used today. Generally the adventure presents a vaguely arabic location like a home, temple, or the like, and then suggests some reasons for the party to go rob them. There are generally a few more things thrown in as well: a wandering monster table for the journey, or a couple of events that can take place. It’s probably most similar to some of the older MERP products. Those presented a location such as a tower or fortress, and then described a few adventures that could take place there in the various ages of Middle Earth. For some reason this product seems to lack the charm of those older MERP products, It could be nostalgia talking but I just didn’t get the same imagery  from these locations. There are not railroad adventures in the typical sense, in fact many of them are quite the opposite: VERY free form. It’s almost like the designer is giving you some outlines or notes for an adventure that you can then work to make your own. The wandering monster tables are very nice and provide some decent details to the monsters, creatures, and environmental issues you may meet. In addition the adventures of full of advice on what to do if the party does Y instead of X and/or how to reintroduce certain aspects of an adventure. What if the party doesn’t take the hook? Then Y or Z could happen. This sort of advice is invaluable in these third age edition products, given their … goals? of getting the party to the adventure in a plausible manner.

It’s a low-magic swords & sorcery world with a mashup of mesopotamian and sultanate cultures combined with some vile cults and the like. You need to do some work to get through the text and you’ll need to flesh things out quite a bit, however these are some excellent seeds if you’re in to that type of game.