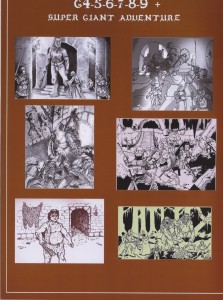 The giants await, as your meek and humble group assembles to venture forth and defeat them. But to do so, you must travel to distant lands, survive extreme conditions and challenges as you search out their hiding places. But afterward, when you think your job is done, and you have gathered all the treasure you can carry, can you find your way back through the Verbeeg Valley?

This is a compilation product containing the six Giant adventures by R.C. Pinnell along with a supplemental adventure just for this product. The modules are a decent homage to the TSR G1-2-3 Against the Giants series. For the most part they succeed well. I consider G1 one of the best modules ever produced and thus this designers work draws comparisons.

The products contains:
G4 – Sanctum of the Stone Giant Lord
G5 – Curse of the Cloud Giant Queen
G6 – Forge of the Formian Smith Lord
G7 – Giants in the Deep
G8 – Manor of the Mountain Giant King
G9 – Secret of the Swamp Giant Steward
The Verbeeg Valley

That’s a lot of adventuring in this compilation, most of it at very high levels!

G4 – Sanctum of the Stone Giant Lord
This adventure features a little romp through a 34 room temple complex of the stone giants. Like G1, the setup and hook are very brief. The map here is a good one, with lots of alternate paths from one location to the next. This allows the party to sneak about a bit, avoid encounters, and ambush as well as be ambushed. There are some options on the map that should allow the DM to extend the complex to a second level if they wish. The primary opponents are stone giants, with a great number being shamans, fighting above their HD and having cleric spells. This is going to make the encounters a real challenge. The designer emulates the quirky design style of G1 well, with a Hammer of Thunderbolts behind some junk in one of the rooms, and a flying carpet hanging up on the wall in one location. Slaying the high priest in the greater temple is not without peril: he attempts to commune and if he succeeds then the temples demigod shows up to battle the party! That’s the kind of old school logic I like! There’s a boat load of very powerful magic items laying about, but then again this is a module for levels 10-14. I missed not having a wandering table or a second level to explore, as well as the factions in G1. There is an attempt made to make this a living & breathing complex, with the occupants going about their own business before being interrupted. This falls a little flat though, mostly because of the lack of multiple creature types. The lesser creatures in G1, rushing about and in the middle of things, really brought that element to life. This adventure feels a little flat.

G5 – Curse of the Cloud Giant Queen
This adventure is one of the more interesting ones in the compilation. Could giants, allies of some local nobility, have called for help and the party is tasked with fulfilling the obligations of treaty by freeing the queen from the basement of her castle, where she’s hiding. This time the dungeon complex has two levels, although the second level is quite small and contains the cloud giants in hiding. The first level map is another excellent one of the type I like; lots of hallways and linking passages. Four separate wandering monster tables are available, one for each section of the upper level. This time out the encounters feel a lot more lively. The party catches the invading fog giants and cyclopskin in a variety of situations. That plus the addition of the cyclopskin as well as the cloud giants allies in the basement really liven things up. There was a minor plot element in G4 that dealt with the motivations of the stone giants however it wasn’t really fleshed out much at all. This module though has quite a bit more to discover in it, with several of the individuals having a lot to reveal and lots of clues for the party to pick up on. There are dead cloud giants everywhere as well as rampaging fog giants. I really enjoyed those extra details and thought they added a lot. This time out the main villain is not a Drow and is refreshing in and of himself. There’s also a slight nod to G3: the cloud giant king has run off with a vile temptress and his treasury to visit the fire giant king.

G6 – Forge of the Formian Smith Lord
Another of the standouts, containing only 28 encounters. The party descends in to a cave system, following a map from G4. The caves have three distinct parts. First there’s some natural caverns. These have mostly animal-like encounters in them. The second part is a massive cavern system that leads DOWN, while the third os a worked stone complex that is home to the Formian Smith Lord, another demigod. The map for the upper chambers has lots of twists and turns and has a couple of notable encounters: one with an injured adventurer and one with the cast-off experiments of a demigod. The central section is essentially one big puzzle room, or rather a large natural obstacle that the party must figure out how to overcome. There’s a bit of a gimp here since flying and teleportation don’t work, although levitation/feather falling do. I have a long standing distaste for those types of reindeer games. Besides, given the set up of this encounter I suspect that flying and/or teleportation would make the room MORE interesting, in terms of separating the party for what’s to come. The lower chambers could have been better. The middle section seems to imply something interesting is coming up however that promise is unfulfilled. These chambers are the home to the Formians demigod of smithing, along with his assistants and applicants for tutoring. I would have preferred to see something more fantastic than what’s presented. A Beholder is worked in well, however the opportunity was lost to get really creative with the environment, treasure, and creatures.

G7 – Giants in the Deep
G8 – Manor of the Mountain Giant King
G7 and G8 are closely linked, being two levels of the same complex. They are also two of the most interesting in this compilation. G7 starts off with a little Descent in to the Depths of Earth map action with the parties final destination being the gold mine of some dwarves who haven’t been heard from in awhile. Once again the magic of G1 shines through: with only six pages of text the designer provides an underground journey, a couple of warm-up encounters in the caverns, and then a full on adventure in an interesting place with lots to see and do! The two set encounters are quite interesting, both in terrain and function, as is the main entrance to the dwarves mine. I really got a good feel for the environments and the brief text got my imagination going. The story element behind the mine, brief and mostly included in the text as it should be, is quite nice as well.

G8 continues where G7 left off. It seems the dwarves tunneled up in someones basement … in the middle of the main temple. Oops! G8’s maps are the smallest of the pack but still manage to fit in some alternate paths. The shaman giants show up again, and quite a few of the other giants are advanced in HD. Despite the large number of servants in the lower halls almost none show up in this module, which was most notable on the wandering table. A few more servants wandering around would have been a great addition and allowed for some more local color.

G9 Is essentially a hex crawl through a swamp. There’s an annoying effect that dampens magic items and use that consumer far too much of the text, although the designed does note several times that the DM is free to ignore it if it annoys them. The hex crawl contains a fine assortment of swamp creatures including more basilisk. I find this humorous because most of the other modules have basilisk as well. We all have our favorite children, after all … Anyway, this adventure has a nice twist to it and will reward intelligent play much more than many of the others. Uh … intelligent non-tactical play. This is the least *hack*able of the adventure modules and a nice change of pace from the typical G1/G2/G3 *hack* style.

In all of the modules there are couple of things I did not prefer. The text for the entires can run on for longer than I would prefer. That is combined with integrating the monsters and treasure in to the text, sometimes bolded and sometimes not, makes the entries hard to read and run during play. It’s going to take some time with a highlighter to turn the entires in to the ‘at a glance’ type that I refer. The magic items are generally standard book items, which keeps with the flavor of the G1-2-3 series however, not everything G1-2-3 did was good. This, along with just listing monster HP and not their stats, means more work for a GM in prepping the adventure. No more than in the original G1 series though. More notes on how the giants respond to incursions, including an order of battle, would have been appreciated.

All in all, these are very good modules. They suffer a bit because of the inevitable comparisons to G1, however they are very goo din their own right.