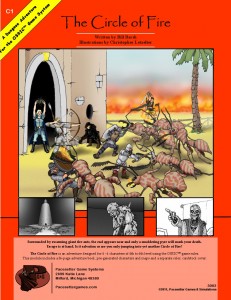 Surrounded by swarming giant fire ants, the end appears near and only a smoldering pyre will mark your death. Escape is at hand. Is it salvation or are you only jumping into yet another Circle of Fire?

This module has a slow burn. The party is faced with several life or death situations in an environment with little to no time pressure. It incorporates some classic play elements, such as an ancient tower with many empty, and some strange, rooms to explore.

While strolling through the park one day in the very merry month of May, the parties taken by surprise by a GNAWING AND GNASHING MANDIBLES! *CLACK* *CLACK* *CLACK*! THEM! THEM! Hmmm, fair warning. By ‘park’ I actually mean ‘barren and desolate wasteland’ and by ‘month of May’ I actually mean ‘Fire Ant Season.’ It seems that every ten years or so the fire ants erupt from the ground en masse and go through some strange ritual of creating a giant circle that gets more and more restrictive. And the party is trapped in it. How embarrassing … It seems that there are thousands upon thousands of giant fire ants encircling the party and slowly closing the ring. This being Dungeons & Dragons, the ‘fire’ is literal; the heat is so intense that everything is being burnt to a crisp hundreds of feet prior to the actual ant ring reaching the party. The ring appears centered on a nearby oasis, with an abandoned inn next to it, and the ants should reach it in about eight hours. More than enough time for the party to contemplate their DOOM. The inn has several encounters, all of which are perhaps the weakest portion of the module. The first are sand golems that block the way if the party doesn’t sign the ledger at the guard shack. There are two ways to take this: either as a goofy lark or as a bit of high fantasy. It doesn’t feel like the silly goofiness that sometimes appears in modules, but rather a bit of high fantasy magical economy. That’s a major turn off for me. The second are a couple of encounters with desert dwellers who know the secrets of avoiding the ants. These are some “let’s get drunk and loot the place” halfling and a band of wasteland orcs with much the same goal, if more hostile intent. Neither group will share the information with the party, and thus it seems to be just an excuse to have some hostile orcs and bizarre halfling show up. It could have perhaps been more interesting with some vermin encounters and making the orcs unwilling but potential “allies” of the party, for certain definitions of that word. Eventually the party will hopefully find two things of interest: a pond with some small gold gems in it and an ancient stone archway standing in a barn at the site that has a yellow keystone. Digging at it’s base shows some yellow powder. The party is supposed to crush a yellow gemstone which will activate the portal and allow the parties escape. The party is transported elsewhere …

This second portion of the module becomes much more interesting. The party find themselves on a great floating roadway under a mighty dome with a great tower at the center. All around the floating roadway are piles of rubble and debris; the ruins of an ancient city. And, of course, it’s occupants: The Wretched. These are essential ghoul-like degenerate humans with a kind of berserker frenzy in them. The party encounters a small group soon after arriving and from their elevated position can see more and more coming out of holes in the rubble piles and moving towards the roadway. Thus starts a frantic rush by the party to get to the great tower. Huge numbers of enemies are massing behind them and pursuing while the party will have to negotiate several sections of broken and rubble-choked roadway. Arriving at the tower they will find the massive doors blown off of it, but no Wretched will enter: they are terrified of the tower. The party now gets to enjoy a non-pressured exploration of the great tower and it’s five levels. The vast majority of the towers 57 rooms contain to encounters are are just mundane rooms.  The more notable rooms have some nice freaky stuff for the party to play with, a memorable Curse, and the dangers of the abysmal chasm under the lower floor. Plunging in to a seemingly bottomless chasm will be a constant reminder and threat as the party explores as several areas are open to the chasm and several floor areas are weakened. What’s interesting about most of the tower is that it’s just a routine exploration of room after room of nothing much of note that is then punctuated by brief moments of tension and excitement. Things pick up quite a bit on level 4 of the tower with several of the rooms serving as bait for the party and some sort of elemental creature or hazard at play. On Level 5 the party briefly encounters the enigmatic Phantom Mage who warns them that the tower is about to disappear … which means The Wretched once again come in to play. Or … they could exit through that crack in the ceiling … One blue dragon later they have some blue gems and can make their exit back through a portal with a blue keystone.

The adventure has more than few interesting things going for it. The knowledge of their impending doom by the ants at the beginning of the module sets a nice tone for the adventureIt seems like you have time however there is no escape from the ants relentless efforts. The transition from this pacing to the frantic run to the tower while being chased by an amassing horde of the Wretched is quite effective. It’s seen again near the end when the party has a much more concrete deadline and needs to escape the tower before they fall prey to the Wretched. In between is the exploration of the strange tower which once again repeats the theme: a slow burn of exploration punctuated by brief encounters of terror. The tower represents itself well as an ancient and mysterious edifice that’s partially abandoned and yet remains full of mysteries. There are several new magic items and several objects for the party to explore and figure out. Many, if not all, of the combat encounters in the tower can be avoided. The module is an excellent example of risk/reward and an old school style of exploration. Hope you’ve got rope; you’re going to need it on this one!