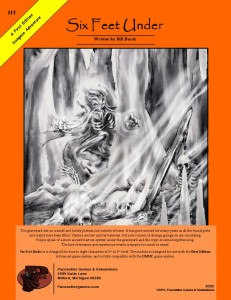 Something is not quite right at the graveyard. Old and unused, with the exception of those previously interned, the graveyard has recently become the subject of fear and conjecture. Strange noises and mysterious figures have been reported by those attempting to visit the site. Now rumors have surfaced of an ancient barrow system is to blame. It will take a band of brave adventurers to discover what lies Six Feet Under!

A short little romp through a nicely developed little scene, good for an evening or two of fun adventuring.

Have you ever been part of a D&D party that’s gotten in to trouble? Not just your normal every day kind of D&D trouble but rather the RUN AWAY! and KILL IT WITH FIRE!!!! kind of trouble that looks for certain like a TPK? That’s what’s going on in this module, however this time it’s not the party that’s in trouble but rather an NPC party. I’m happy to say that much fun will be derived from it!

The setup and hooks here are simple: there’s a graveyard that full up and therefore unused except for the occasional visitor. Strange lights have been seen recently. The party will either stumble upon it or be hired to investigate. Not the strongest or most imaginative hooks, or the most original hook or setting, but there’s a good twist involved. It seems that there’s a band of grave robbers at work. They’ve been tunneling around under the graveyard and digging up the graves from the underside in order to loot them. So, not really a band of evil necromancers but rather some lazy greedy goons operating a Paint Your Wagon style ruse to Make Money Fast. So far they are doing pretty well and have looted more than a few graves and mausoleums. They get a little careless now and then, which accounts for the lights the party sees. Then the party shows up and things fall apart pretty fast …

The robbers have a look out that spots the party and the bandits stop work and keep quiet. Well, for the most part, I mean they do have some time to kill, so they open a door they had not yet looted … only to reveal a major undead baddie and his undead minions! RUN AWAY! KILL IT WITH FIRE! And thus starts our little madcap adventure. While the party is investigating the graveyard and poking around in the tunnels the robbers are getting slaughtered and making a last stand. I find both the premise (Grave Robbers!) and the In Medias Res portion nice twists. I’ve always enjoyed a kind of living breathing dungeon that has things going on in it. Walking in on someone looting a tomb, or someone making dunner or repairing his boots. This makes it seem like the dungeon has a life outside of the parties action and that they are not just waiting around for the party to show up and *hack* them. It’s also pretty nice that we get to see an NPC party. These were always staples in earlier games and it’s nice to see the party encounter another set of murder hobo’s.

The idea is that the party will kick around the graveyard for awhile, perhaps hearing some sounds from underneath, until they eventually find the lookout and the passage to the underground tunnels. This first portion of the adventure has a few interesting touches. There’s a random table for determining what the party find if they start digging up graves and looting mausoleums, as well as a couple of nice encounters with creatures that have their own motivations. For example, behind a barred crypt is a wight that just wants out so he can take revenge on his family. He’s no interest at all in fighting the party, just escape. Or a spider that’s just lairing in a building while it hunts around the graveyard. OMG! Creatures that are not solely intent on fighting and eating the party! WTF was the designer thinking! This is a welcome and refreshing bit of naturalistic style that I enjoy seeing. There are a couple of other freaky little non-combat encounters as well for the party to investigate as well. All of the the text tends to be on the wordy side, with only 2-4 encounters per page, however they do deliver.

Underneath the graveyard the party will find the tunnels the robbers have been digging and using. Oh, and the signs of a slaughter. Recall that the undead have just gotten loose and are currently eating/attacking/hunting the bandits. There are three or four notable encounters in the tunnels, all of which deal with the undead having just fed or with them in the process of attacking the evil party. You get the sense of a sense of chaos and desperation as the encounters unfold. The module has 28 total encounter areas on a rather simplistic map and should be a good for a nice evening or two adventuring.

On the down side, the encounter descriptions feature boxed text and are a little wordy for my tastes. I always find the boxed text adds more confusion because I can never quickly and easily find out what’s going on in the room. The gems, jewelry and magic items are a little generic for my tastes as well. “50 gp gem” and “+1 sword” are the norm for module writers however I like a little more details on what the party is finding. It’s a simple thing but adds a lot to the experience of playing.  There are a few new magic items, three I believe, which I do greatly appreciate, as well as two new monsters. This is great because it keeps the party guessing; they never know what to expect when the monster didn’t just come out of the Monster manuel. There’s also the gnolls. I’m not a big fan of humanoids in modules. In this case they seem to be a stand in for “tougher than normal bandits”, in which case I would have preferred to see some bandits who are tougher than normal. I believe that throwing in humanoids as monsters waters down the term ‘monster.’ I want my party screaming RUN AWAY! and KILL IT WITH FIRE! when they see monsters, and humanoids just don’t provoke that.