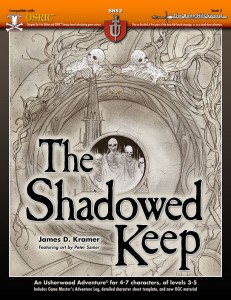 An intrepid band of adventurers brave the frigid wilderness of the vast Northern Territories in search of an evil artifact known as the Bone-Hilt Sword, and some only to satisfy their thirst for wealth and treasure. But will they survive the armies of undead, dragons, and creatures of the cold northern lands?

This is a wonderful adventure with an almost dream-like quality. It’s a Fantastic Location and Epic Quest done OSR style and framed by a high quality layout. This is an excellent offering from John Kramer and his Usherwood Publishing.

Zowie Wowie! This module reminds me a bit of an old campaign I once ran. Villages and towns were of the worst sort. Full of the poor and diseased, covered with mud and dirt, barely eeking out a living. Just off the path the glens seemed brighter, the dales mistier and the colors more vivid. It was clear you were somewhere else. It is that feeling of ‘now I’m someplace else’ that this module does an excellent job conveying. The players are going someplace special, someplace Evil. The location feels like someplace special and the encounters leading up to it have an almost dreamlike quality to them. There is a definite feeling of transition from the normal worlds of man to this Other Place. Now understand that there is no actual plane-hopping involved; this is all just a normal overland trip from a village to the Shadowed Keep. The caves where the first two installments took place were full of evil humanoids but they felt like were of this world. The Shadowed Keep though is more of a supernatural force of entropy and evil. It _feels_ like a place of power and evil, and the journey there feels different because of that.

There are couple of hooks provided. The most obvious is if this is a part of campaign play and the party is searching for The Bone Hilt. This object has been referenced in several past modules however this would be the first module in which the party is actively taking part in that hook. There is another hook in which the party hears the story of a band of adventurers who journeyed to this Shadowed Keep and never came back. I have a personal distaste of the word ‘Adventurers’ since it implies a high fantasy world setting of which I do not approve. I do, however, approve of the party hearing stories of other travelers, thugs, mercenaries and the like who went places and never returned. I like the sense of history that it implies.

There are three encounter areas on the way to the Shadowed Keep. They can all be avoided however they also all have an almost dream-like feeling to them. You get the sense that the party is Going Somewhere Special in the encounters. The first is a snowy village. Imagine a village sitting nestled in a forest at the base of some mountains. As you approach over the top of a hill you can see through the trees that something is not right. It’s very quiet, there is no activity, and several buildings are burnt. A snow has fallen which hides most signs of the massacre that that has taken place however the interiors are full of of the evidence: mutiliated corpses, hung bodies, burnt victims and the like. There was a cruelty behind this massacre that one doesn’t generally see described. It’s not all that graphic however you do get the sense that of a palpable EVIL behind these actions. It’s very very well done and extremely evocative. The other two encounters, a graveyard and a guarded pass, are in much the same vein, as if the valley in which the Keep sits and the keep proper. The ruler is undead, and this is an undead king done right. There is a feeling of decay and he commands both undead and living forces in a haphazard way, as if he’s not trying at all. I could go on for paragraphs on the evocative natures of the encounters and settings. The designer does a superb job of creating evocative settings in which I can then fill in with my own imagination. This is exactly what I’m looking for.

The layout is top notch, as is all Usherwood Publishing modules. (See my review of the Shattered Skull for more information on this topic.) I’m not sure anyone does a layout or organization better than Usherwood. John Kramer, the designer of this module and owner of Usherwood, is a layout and design guy for his day job and it shows. There are several new monsters for the party to encounter and the gems & jewelry are detailed in a nice way, with descriptions for each. About half the magic items are given extra attention and/or detail in some way, which I really appreciate as well. It helps turn a good adventure in to a great one when you can provide that extra detail. It does feel a little heavy on the magic items, this being a modules for levels 3-5. That may be mitigated somewhat by players using an old school style of not fighting every monster and avoiding many rooms & encounters. The maps are top notch an interesting, if not very complex, and there is a section for NPC’s and pre-gens, as well as several pages that the DM can use for an adventure log.

As far as I know, Kramer has done Ychyrn the Tyrant, The Shattered Skull, The Shadowed Keep, and Arachnophobia! All four are top notch modules and you should have them in your collections.