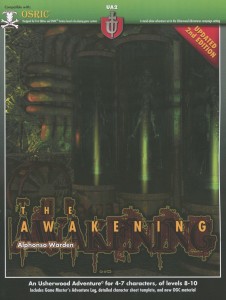 The dreaded villoi have been awakened from their centuries-long slumber by an evil greater even than themselves. Can your party of intrepid adventurers stop the combined menace before all the lands are over-run? Enter the lands west of the infamous Blood Pass to uncover the secret, and thwart The Awakening.

This module has several flashes of brilliance however the individual encounters tend to be very difficult with no options offered other than combat.

The central concept of this module is rather interesting. In ages past insect-men invaders from another dimension/plane set up several hives and attempted to conquer the land. After failing they went in to a hibernation. Recently one group was awakened by a powerful devil. They formed a mutual pact for greater evil and are now trying to wake their brethren. This appeals to me; far too often non-humans are just depicted as humans with pointy ears, or short humans with furry feet, or humans with pig faces. A truly alien species with alien motivations and an alien culture is refreshing. Unfortunately … these are just humans with insect shells This is a major opportunity lost. In the end the insect-men form another dimension have inscriptions over doorways, cleric classes, and act just like normal humanoids who are all too human. Another example of this are their spears. There’s a small insect that lives in the head and when it hit the insect break off and burrows in to the targets body, doing extra damage each round for three rounds. That’s pretty frigging cool. But that’s where its left at. This is a theme with this designer: there are some very imaginative elements that are surrounded by plot and mechanical elements that are less than stellar, and in many cases a major turn-off.

The hook here is a brief city/town adventure. The party runs in to some insect-men in a local sage shop and are led to a more knowledgable sage by a note in one of their pockets. That leads to the parties journey to the alien hive and it’s extermination. Letters on alien insect-men are lame. Sage shops (MULTIPLE sage shops!) are lame. Shops selling scrolls of Heal, Restoration and Limited Wish are lame. This sort of high fantasy style is major turn off for me. I don’t like this sort of magical economy nonsense. I know we’re talking about a game where guys throw fireballs, but I can’t get past the high fantasy magic shop style. I LOATHE it. The insect-men speaking common and carrying a letter are major detractors from their alien nature.

The alien hive looks a lot more like a spaceship then a hive. It has the usual “you cant teleport or passwall or dimension door in” element that is so popular with this designer. The encounters here are a mixed batch of insect-men, devils, and ogres. There are a whole lot of “they attack immediately” and “they fight to the death” type encounters present. That combined with the limited map options means that this is really just a straight-forward hack. There are a couple of puzzles and quite a few traps, too many of which feel arbitrarily deadly. Too many of the encounters are full of excessive and unneeded details which just bog the encounters down. This is combined with encounter rooms that don’t feel alien, but rather like just another high-fantasy barracks room.

The module has excellent production values, as all Usherwood titles do. There are beautiful maps, pre-gens, an appendix of histories, and so on. Unfortunately the flashes of brilliance are marred by the high fantasy setting and encounters that feel too much like one of those deathtrap dungeons I used to design when I thought it was player vs. GM. I like Save or Die, difficult encounters and deadly traps however there are just too many of them in this and I get a very adversarial sense from the writing style. Not for me.